Hours: Most homes were open 10 until 5

Cost: $35 per person (discounts may apply to seniors, military personnel and children)

Parking: There are several parking lots in the area (specifically on Congress St and New Liberty St)

Handicapped Accessible: Some homes are not handicapped accessible because of their old designs

Summary: An annual event that allow s visitors to tour the inside of historic homes throughout the historic Salem, MA, area How many times have walked by the many historic homes of Salem, MA, and wondered what they look like on the inside?

The Christmas In Salem event in Salem, MA (held annually the first weekend of Dec) lets you see for yourself.

The 39th annual self-guided tour, which began at the House Of The Seven Gables, included tours of 15 homes.  Some of the homes featured on the tour are historic buildings run by the park service, some are actual home residences.  Tickets can be purchased on the day you visit, or (and I highly recommend it) you can purchase your tickets in advance online.  There is also a trolley that can take you to some of the homes.

As there are so many buildings included in the tour (15 in total, but only 11 that allowed photography), I will give a brief description and background of each building with links for additional information when available. I took a variety of photos from each building, depending on the size and beauty of the building.

House Of The Seven Gables

The House Of Seven Gables has always been one of my favorite historic homes in all of  new England.  I have always loved the narrow, almost secret passageways and its history. 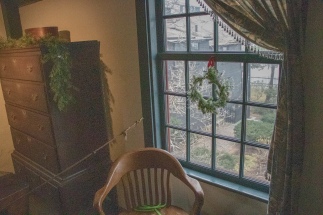 There was also a Christmas tree in one of the rooms at the home.  Fun fact (except for those alive at the time): Christmas was banned by the Puritans in the MA colony from 1647 until 1681.  Rather than being a time for celebration and festivity that included some of the pagan origins associated with the holiday, the Puritans thought the holiday should be a time for fasting and humiliation.  Another fun fact: the first Christmas tree, similar to the tree shown below, in America is said to have been in the home of Cambridge resident and Harvard College professor Charles Follen in 1835. There was a wine tasting area, as well as a place to view the food and toys of this era.  The food shown below on the far right of the table is a common delicacy of that time, cod. 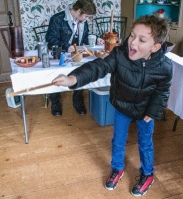 The outside of the House of the Seven Gables is as pretty as the interior. 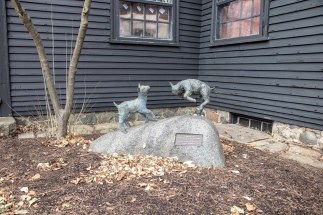 Another fun fact: Although he visited his relatives at the Turner-Ingersoll Mansion (aka House of the Seven Gables), Nathaniel Hawthorne never lived in the house.  He was born on Union Street.  But, it may not seem that way when you visit.  The Union Street house where Hawthorne was born was purchased by The House of the Seven Gables Settlement Association and moved to the museum campus in 1958.

This building, located a short walk from the Salem Witch Museum at 14 Mall St, is one of the homes where Hawthorne lived in Salem.  This building is not included on the tour. The third home on the tour, the Captain William Lane House, and the fourth home, the Josiah Getchell House, did not allow photography.

The fifth home of the tour was the Thomas Mogoun House, 58 Derby St.  As you will notice from the photos from the homes and buildings in the photos is that while they do have the original, or close to the original frame and structure, they were indeed more contemporary inside, unfortunately.  I was hoping to see rustic beds with hay instead of mattresses.  No such luck. One of the more serene and peaceful places on the tour was the Saint Nicholas Orthodox Church at 64 Forrester St.  A choir of men and women were singing traditional Christmas songs (not contemporary or radio songs of course).  I really could have stayed and just listened to them because of their beautiful voices.  I didn’t take any photos inside of the church and this is actually a photo I took of the church from 2015 when I first began my blog.

The seventh home on the tour was the Ives-Webb-Whipple House at 1 Forrester St.  This house, which was built originally in 1760, was being shown and is still on the market.

The house was staged very tastefully. 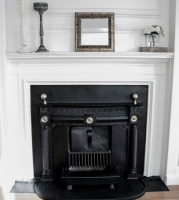 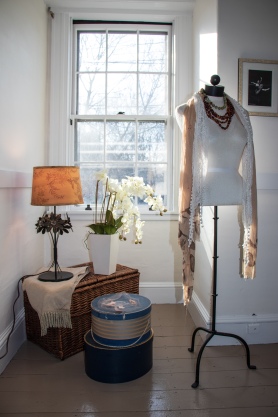 The Captain John Hodges House at 81 Essex St was the 8th home on the tour. 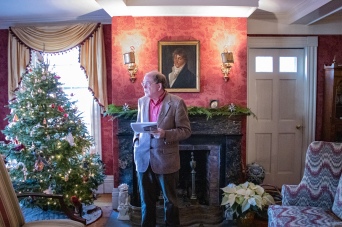 The 9th home on the tour was the Richard Manning House located at 10 1/2 Herbert St.

The 10th building on the tour was the Immaculate Conception Church at 15 Hawthorne Blvd.  Although there was some pretty and interesting architecture and decor in the church, I didn’t take any photos there.

The 11th building on the tour, the Captain Simon Forrester House at, 188 Derby St, and the 12th home, the Benjamin W. Crowninshield House at 180 Derby St, did not allow photography.

Another building I had walked past countless times without visiting until this year (I stopped in during the summer and hope to post that shoot…someday) is the 13th building on the tour, the Salem Custom House at 176 Derby St.  Interestingly, Nathaniel Hawthorne worked here for some time.  He worked on a little book you may have heard of during his tenure there.

The 14th home on the tour, The Derby House at 168 Derby St was not available for tours during my visit.

The 15th and last home on the tour was the Captain Edward Allen Mansion House at 125 Derby St. Not all of the historic homes are available for tours and the particular homes that are available for tours may change from year to year.  Since many of the homes are fairly small to average size and only so many people can enter a home at one time, the wait can be long to get into some houses. But the homes are all located near each other and the map lists them in a way that is makes them easy to find. I was able to hit each home in about 4 to 5 hours.  If you’re not in the Christmas Spirit, the mix of historical background and Christmas decor is sure to get you into it!

Similar places I have visited:

Hi I'm Wayne. Welcome to my blog. I am a true New Englander through and through. I love everything about New England. I especially love discovering new places in New England and sharing my experiences with everyone. I tend to focus on the more unique and lesser known places and things in New England on my blog. Oh yeah, and I love dogs. I always try to include at least one dog in each of my blog posts. I discovered my love of photography a couple of years ago. I know, I got a late start. Now, I photograph anything that seems out of the ordinary, interesting, beautiful and/or unique. And I have noticed how every person, place or thing I photograph has a story behind it or him or her. I don't just photograph things or people or animals. I try to get their background, history or as much information as possible to give the subject more context and meaning. It's interesting how one simple photograph can evoke so much. I am currently using a Nikon D3200 "beginner's camera." Even though there are better cameras on the market, and I will upgrade some time, I love how it functions (usually) and it has served me well. The great thing about my blog is you don't have to be from New England, or even like New England to like my blog (although I've never met anyone who doesn't). All you have to like is to see and read about new or interesting places and things. Hopefully, you'll join me on my many adventures in New England! END_OF_DOCUMENT_TOKEN_TO_BE_REPLACED
This entry was posted on Saturday, January 5th, 2019 at 3:36 pm and tagged with Custom House, Historical, history, House Of The Seven Gables, Massachusetts, Nathaniel Hawthorne, New England, photographs, Photography, photos, Salem, tours and posted in historical, Massachusetts, New England, photographs, photography, photos, Salem, Uncategorized. You can follow any responses to this entry through the RSS 2.0 feed.
« Wreaths Across America (Veterans Memorial Cemetery, Agawam, MA)
Westfield 350th (Westfield, MA) »