Location: Village Green West Main Street at the itersection of Rt. 102 and Rt. 103, Village Green next to town hall, Stockbridge, MA (next to the First Congregational Church)

Parking:  There is limited parking available in a lot next to the tower

Highlights: daily playing of children’s songs (from May 1 until Sep. 1) 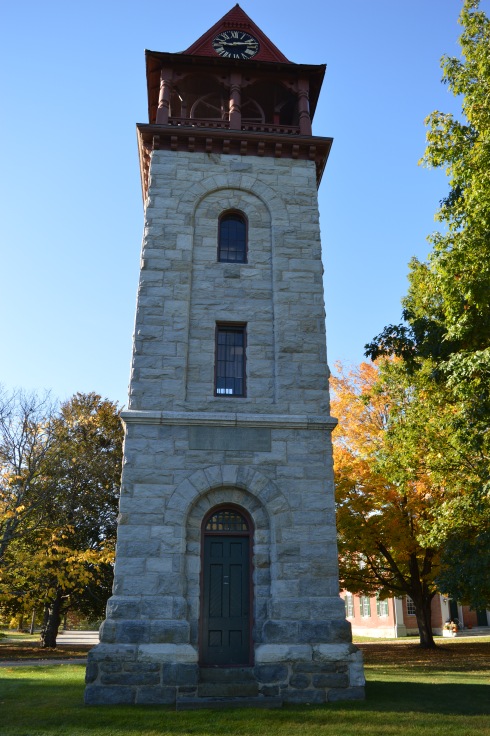 Built at the former site of the first church in Stockbridge, MA, which stood from 1739 until 1785, the Children’s Chimes Tower (also known as the Dudley Field Memorial Tower) has been ringing seasonally since 1787.

The tower used to ring everyday at 5:30 between the first apple blossom and the first frost on the pumpkins.  This has been changed to June 1 until September 1.  The frost seems to come sooner each year so it’s probably still pretty much the same dates as it used to be. 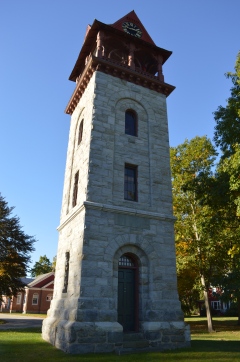 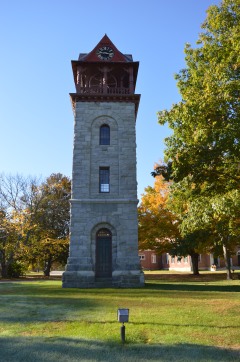 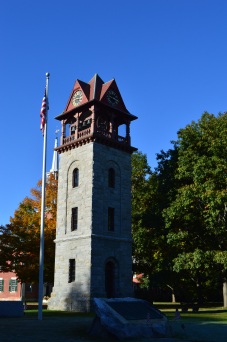 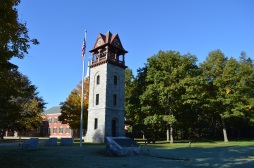 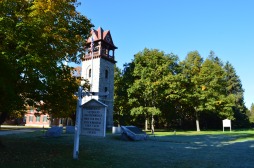 As luck would have it, the operators of the chimes and people who care for the tower were moving in a piece of furniture during our visit.  They agreed to give us have a tour. 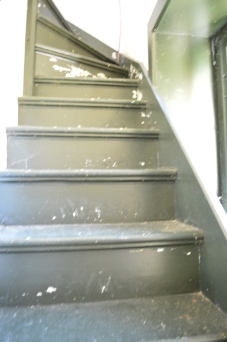 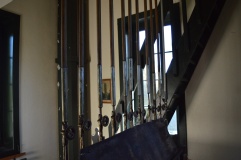 Bruce is one of the chimes players.  He says he plays a variety of different tunes for the children.  “Three Blind Mice” is one of his favorites.

The three story tower stands over 7 meters off the ground from the console  (roughly 23 feet).  But, it seemed taller.  The height of the highest bell is 20 meters (over 65 feet) bove ground.  The wooden portion at the top of the tower represents the Stick style of architecture. Clocks are mounted in the central gables on all four sides of the roof.  There are also 11 bells and the heaviest pitch is in E.

David Dudley Field, a wealthy New York lawyer and son of the prominent D.D. Field, gave it to the city of Stockbridge in memory of his grandchildren.  His one condition was the chimes were to be rung everyday at 5:30 p.m. between, “apple blossom time and the first frost on the pumpkin.”

The tower has gone through some minor changes through the years.  In 1973, the instrument was made larger with bells made by an unknown maker.  It also began with 10 bells but has since added another bell for the current 11 bells.  They have also added war memorials along the front and side of the towers, honoring those lost in war from the Stockbridge area. The names of the fallen are engraved on the memorials around the tower. Older photos of the tower show ivy growing on the sides.  But, it has basically remained the same.

I wonder if this is the original bench that was stationed next to the tower.

Even this bird likes the chimes tower.

There’s something about seeing a tower like this and knowing they cater to a younger audience, playing nursery rhymes and other children’s themed music that brings out the kid in you, even in this hardened New Englander.

Below are some videos of the tower.