Although the city does not have a professional sports team, Springfield, Massachusetts is the home of the Naismith Memorial Basketball Hall Of Fame.  Of course, the game was invented there.  So, it is an appropriate location.

The great thing about playing hoop is all you need a ball a net and a decent pair of sneakers.  The Hall has the nets outside the entrance.  All you need is a ball.  I’m not sure how long you could play before they make you leave.  From this entrance the Hall is deceptively big (three floors). 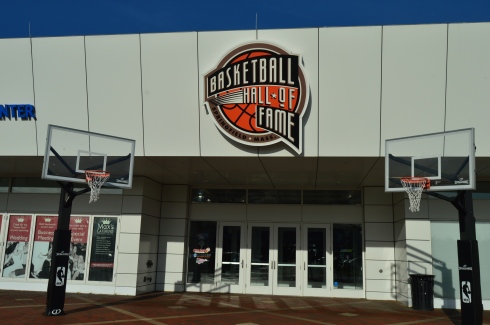 There is a big parking lot at the Hall but there are other business in the parking lot.  We arrived early to make sure we got a good spot.  It costs adults $22 a ticket, seniors (65 and older) pay $17 a ticket, $16 for youths (ages 5 to 15) and kids 4 and under get in free.  You can also sometimes purchase tickets at third party vendors at a reduced price (we got ours at the Big Y grocery store).  So, it doesn’t hurt to look around for other places to get your tickets.

I only wish I had gone there when I was younger.  In fact, when I was a kid I could easily see myself telling my folks they could drop me off when it opens (at 10) and come by and get me at closing time (4 or 5 on Saturday).  I could easily pass 6 or 7 hours there.  I am not sure they would go for it, though.  As time passes, our interests change.  While I do still love playing and I like watching, I am in no way even close to the fan I used to be.   But, the charming Hall of Fame made me a fan again. 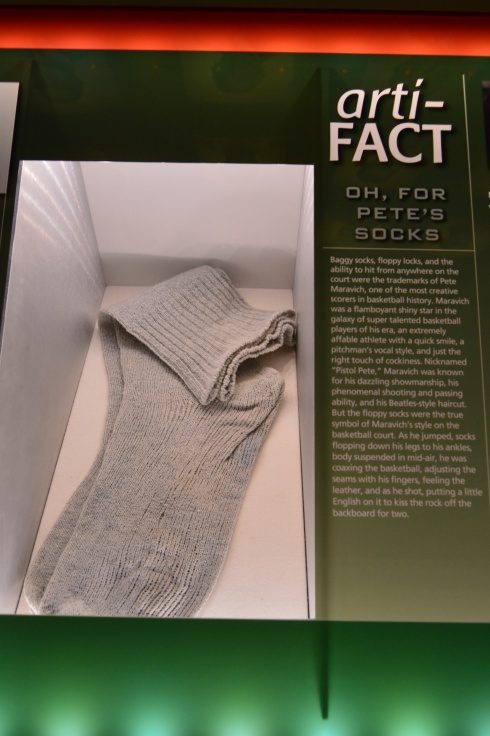 Or the creatively crafted flag made of sneakers

Or the jerseys and sneakers of the best three of all time (sorry Kareem, Lebron and Wilt)

There is something for everyone.

The Hall is also a great family friendly place.  There are so many activities geared for children.  Want to recreate when “Havlicek stole the ball?”  You can do so by telecasting that play and many others in their play by play booth.  Want to try to block a shot by one of the NBA’s  elite players?  There’s a game for that too.

There are also videos galore.  Along the wall there are little monitors with short videos of speeches, highlights and informational clips.  This video below is a video about the newest class of NBA Hall inductees (congrats Dikembe).  There is also a amphitheater in the hall.

Being a native of the Boston area, I was drawn to the Boston Celtics’ memorabilia.  Such as a Larry Bird statue (striking resemblance)

One of Red Auerbach’s cigars.  He used to light a cigar during every game he coached for the Celtics if/when he thought the game was over (before the official end) as a gimmick to psyche out the opponent. 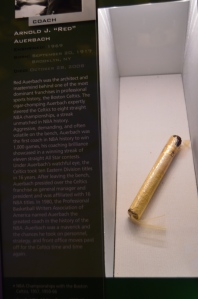 But, there are statues, mementos and reminders of every team from every era, even non professional teams like the Harlem Globetrotters (who did have some would be professional players play for them such as Wilt Chamberlain).  I used to love the Globetrotters.  I always felt badly for their rivals, the poor Washington Generals, though! 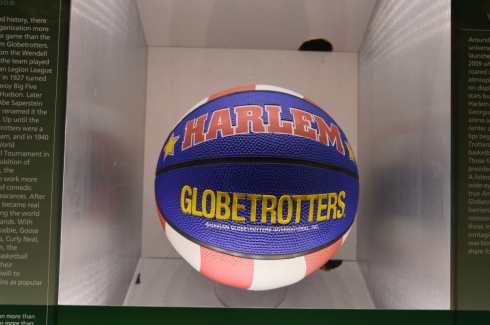 There are certain players that you’re drawn to.  They may not be the best player or even the best to ever play their position, although one of my favorite characters is certainly in the top 3 at his position.  Charles Barkley played with an intensity and perseverance only matched by the other elites he is enshrined with.  But, he did it with flare and intensity.  I looked up one of his YouTube videos if you’re unfamiliar with him (the play 1:12 is ridiculous) .  Oh yeah and he is funny as hell.

Below is one of his rings for being on the NBA 50th anniversary all time team.

My visit to the Hall of Fame was also a learning experience.  Even though I was a pretty rabid fan as a younger person and still a casual fan, I learned a lot during my visit.  For instance, have you ever heard of Teresa Edwards?  I hadn’t either before my visit.  She is the most decorated basketball player of all time.  Among her achievements are 5 gold medals, a bronze medal, gold medals in the Pan Am, Games, Jones Cup and FIBA World Championship, among many other awards. 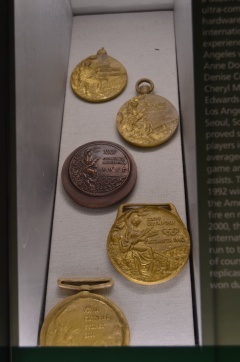 The best part for me was the lower level of the museum.  Several basketball hoops are set up so that all the patrons can shoot around (balls are provided free of charge).  Some of those kids can ball!

My trip to the Hall rekindled my fondness for basketball (it hadn’t been the same for me after Michael Jordan retired).  It also brought back a lot of memories from what I consider the “glory days” of the game.  It was a trip down memory lane.

Yeah, I still got some skills.