Hours: (hours during the 2017 Fishway Season)

Parking: There is a small parking lot for about 10 cars.  Additional parking is available on Bridge St on the sides of the dirt road at the entrance

Handicapped Accessible: No.  I did not notice an elevator to access the fishway.

Every year around this time of the year, thousands of shad, bass, eels and other aquatic critters make their way to the Holyoke Dam as part of their annual migration.  That’s where the people at the Robert E Barrett Fishway come into the picture.

The Robert E. Barrett Fishway staff have been helping fish (mostly shad) make their migration since  the mid to late 1800s when they actually had to use buckets, ropes and levers to help the fish along.  Now, they used modernized technology to help thousands of fish a day make it along the dam.  In 2016, they helped 422,649 by their manual count done by college interns.  The interns use a clicker to count each fish.  And you thought your job was tedious.

These days, the fish are carried up by a mechanical cage-like trap pictured below that collects the trapped fish about every 10 minutes.  These traps can carry 500 to 700 fish at a clip. 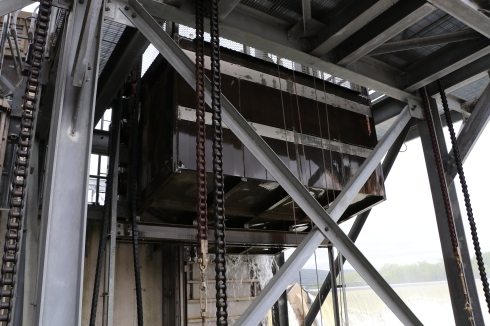 The fish are attracted to the stream that leads to the fishway by, of all things, oxygen.  Peter, our friendly tour guide, told us they add oxygen to the water and the fish, with their keen senses, are attracted to this slight change.  Once they are channeled into the stream, the fish are trapped between two gate-like structures and visible behind a glass window where they are counted by the interns with clickers.  They are also visible to the thousands of visitors who stop by each year.

The fishway is named Robert Barrett, the former President of Holyoke Water Power, who, in 1955, was inspired to create the first fish elevator on the east coast of the United States.  Since then, the fishway has emerged as one of the busiest fishways in New England, if not the nation.

I have always thought fish were cute and resilient.  A lot of people don’t seem to agree on this (at least on the “cute” part).  But, think about the dangers and obstacles they face every day from predators (including people) to nature itself, the fish has withstood so much and still perseveres.   In fact, we have a lot (or at least those things) in common.  Think about it.  Something so small and, frankly, taken for granted gives us so much and overcomes so much.  Yet, we often consider them insignificant or “yucky”.   Then again, the fact so many people don’t appreciate them, makes me do so all the more.  In any case, I was very excited to see them all through the windows at the fishway. 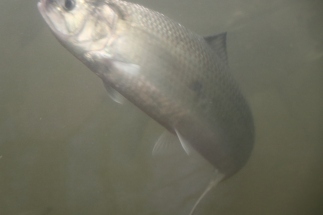 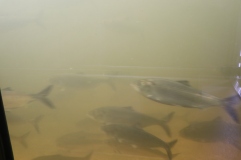 After they are released from the cage, the fish make their way along the Connecticut River.

Turkey vultures and other birds of prey, perch on the various tree branches by the fishway for easy pickings. 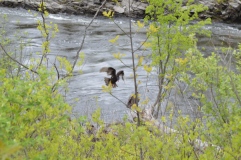 Even if you can’t make it to the fishway for the annual fish run, you can go for a walk, observe the bird life or even take your dog along the property to enjoy the beautiful views.

On the grounds of the fishway is one of the original ways that helped power the dam.  It sure has come along way from those days.

Peter was our friendly tour guide.  Unfortunately, the flash didn’t go off for the photo I took of him.  But, I wanted to include his photo anyway.

Unfortunately for the shad, there was the annual Shad Derby Tournament the 2nd and 3rd weekends in May.  Fishing enthusiasts were bringing their catches to the parking area of the fishway to be weighed for the $1,000 cash prize.