Handicapped Accessible: The farm is but the restaurant might not be

It’s March and that can only mean one thing.  Well two things.  Your March Madness bracket sheets are probably as marked up as a fifth grader’s book report  and it’s maple sugar house season. Since this is the peak of maple sugar season, we decided to take a trip to Pomeroy’s Sugar House.  Pomeroy’s Sugar House is a third-generation restaurant and maple sugar making house in Westfield, MA.

Because of the weather conditions during this time of the year, March is considered “Maple Sugar Making Month” in Massachusetts and many of the other states in New England.  The best conditions for collecting and producing maple sugar syrup is when the temperatures are cold at night (below freezing) and mild during the day (in the 40’s and warmer typically).  The season is supposed to last about 5 weeks.

The process begins usually during the beginning of the month of March when the temperatures begin to warm during the days.  The freeze and thaw process alters the pressure in the trees and gets the sap flowing so it can be collected.  Holes are cut into the maple trees with drills and spigots jut out from the trees.  Buckets are then propped up against the trees to collect the sugar   During their growing season, the maple trees create starch.  As the temperature increases, enzymes in the tree transform the starch into sugar during the Spring thaw.  The trees then absorb water through their roots which mixes with the sap and voila you have the makings of a tasty treat that is  considered a emblematic of New England. 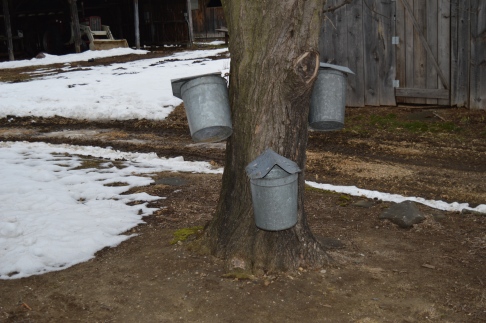 Some of the more modernized maple sugar plants use tubing rather buckets to collect the sap.  But,many of the sugar houses still use buckets.  It gives it a more traditional look and it also shows visitors just how the process works step by step.  Each tree can usually yield between 10 to 14 gallons of sap per bucket with some trees having 2 or 3 buckets attached to them.

Even after the sap is collected the process is not complete yet.  Not even close.  Sap is 97.5 % water and only 2.5% sugar.  So it needs to be boiled down to get to the tasty goodness to makw syrup.  Through a long and somewhat arduous process, the sap is processed and turned into syrup with the help of these machines. 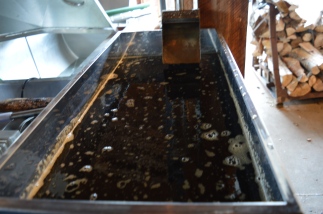 The truck below is one of the trucks Pomeroy’s uses to transport their sap from trees at other locations. 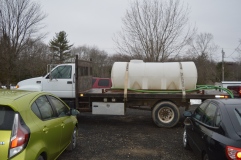 Fun fact (unless you’re one of those making the maple sugar): it takes 40 gallons of maple sap to make just one gallon of maple syrup.

Fun fact number two: the Native Americans introduced the process of making maple syrup to the European settlers.  It was all downhill from there.

The demand for these sugary treats is high.  In fact, the restaurant ran out of maple syrup during our visit.  But, the friendly staff at the sugar house were busy preparing more for later that day.  If you get the chance to go today, the staff at Pomeroy’s said they would have more by 5 p.m.  Or, stop by another day!

There is also a farm in back of Pomeroy’s Sugar House.  The cows were in their pens.

A baby calf was hiding in his or her hut but the calf eventually got out to say hi. 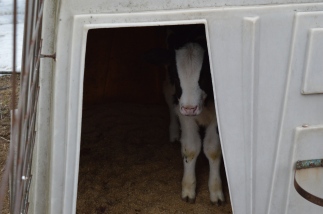 Please connect with me on the following social media networks: