Parking: There is a lot that accommodates about 50 cars next to the reservation.  It fills up quickly on nice days.  I got the very last spot when I went in the morning.

Once the site for swimmers and divers, Quincy Quarry is now a haven for rock climbers, dogs and graffiti artists.

Quincy Quarries Reservation (or as we used to call it “The Quarries”) was originally built in 1825 as a large scale quarry industry,  Over the years, however, it has gone through some dramatic changes.

Fun fact: stones from the quarry were used to as the main source of stone for the Bunker Hill monument in Charlestown.

The grassy fields and paves walkways used to be the site of a quarry industry.  And water took up most off the area that is now grass and concrete.  Business deals (a golf course is located just past where the quarry industries once stood) and a slew of deaths (mostly from diving into the water and some under more mysterious circumstances) at the quarry sparked the debate to fill in the quarries and use the land for business purposes.  According to the New York Times, at least 19 people have died there (and who knows how many cars and other objects lied at the bottom of the water). In fact, a post or series of posts could be dedicated to the controversial and mysterious past of the area.  So, the quarry was drained in most parts and the area was made into a walking park.

So, where did all the dirt come from to fill in the once watery quarry?  Remember he “Big Dig”?  Yup, that dirt was used to fill in the drained quarry.  There is still some water in the quarry.  But, people don’t jump in it anymore.  Not only is it very dirty, it is seemingly much more shallow and there is much less of it.

After the last quarry closed in 1963, the area was dormant except for the people, mostly younger kids, who enjoyed diving off the precipitous rocks.

It’s hard to believe this area was mostly just granite and water a few decades ago.

Rocks, paths and grass cover what was once water.

Boy have times changed,  The very same quarry that my father used to dive in have largely been filled in and paved over or have become fields.  And, instead of jumping off the quarry, people climb up them.

This particular rock was 60 feet high and the path to the top was pretty narrow.  But, I made it up.

The groups of climbers all work together to ensure their ascent is a safe one and cheers erupt from the other climbers whenever anyone makes it up.

You can learn a lot when you go on photo shoots.  I’ll never complain about my physical obstacles again after watching this climber. 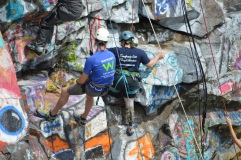 The climbing teams, and it is a team effort, go through great efforts to ensure each climb is safe.  The people go over the procedures and safety protocols before each climb.  Each person has a role whether it is the person holding onto the line, the device keeping the person suspended or the climber.  Still, it’s hard to believe one rope or one board could be the difference between success and failure (although there are other backup safety measures as well).  It is very safe if you take the correct measures, though.

Its a long way down. 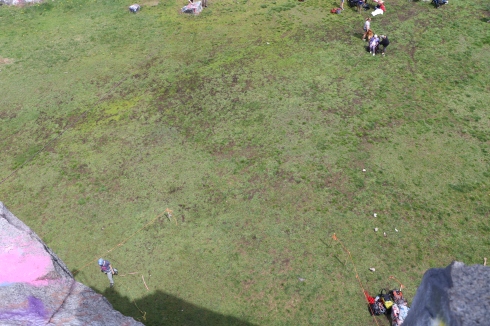 The funny thing is I am not exactly fond of heights.  But, whenever I have my camera with me I get so focused on what I am doing and I don’t really think of the risks as much as getting a good photo.

The views from the rocks are impressive, the skyline of Boston being the highlight of the various views.  You can also check on the traffic into Boston from that rock before you leave. 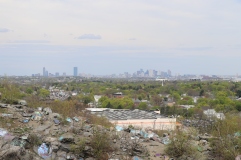 There are several rocks at Quincy Quarry that people use to climb, draw on and just rest on.

The graffiti is one of the first things you will notice upon arriving at the Quincy Quarry Reservation.  In fact, it seems to be encouraged. 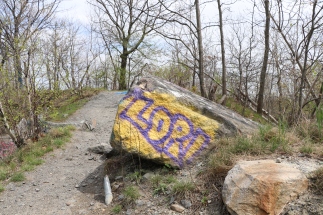 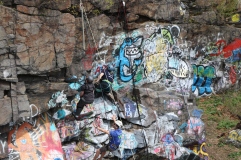 There was also this creative and romantic proposal scrawled against one of the rocks.

There is also abundant wildlife at Quincy Quarry Reservation.  Although they weren’t there (or they were hiding) during my visit, coyotes and deer are known to inhabit the area.  I only came across a frog who thought he was hiding from me

I also saw lots of dogs at Quincy Quarry.

Baxter is a 2 year old Border Collie.  He may have three legs.  But, he is just as beautiful and sweet, if not more, as any other dog I saw that day. 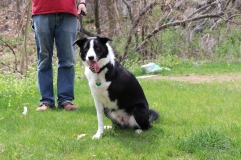 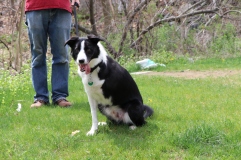 Maddie is a 9 year old mixed shepherd.  But, hey, how did she get up there!? 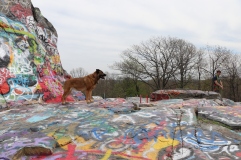 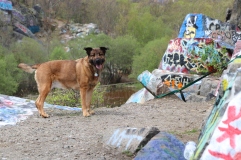 Here is a video from YouTube to give you a sense of how different the quarry looked and just how popular of a spot it was.