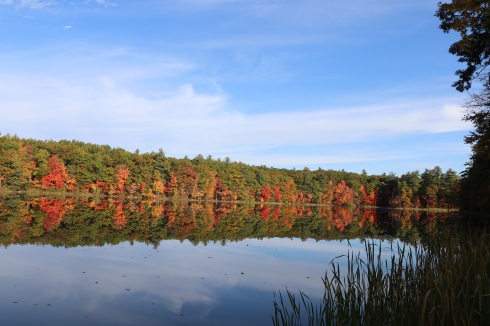 Over the past few weeks, I have been visiting some of the more colorful parts of the New England area.

I am going to post one short blog post with a photo from each place I have visited with a link to my Facebook page where you can find the additional photos from my visits.  Please consider following me on Facebook!

I have dubbed this series, “Five Days Of Foliage.”   I am also posting a link to the original post in the top part of the blog post.

I will post the “best” photo from my visit  and post the additional photos from my visits on Facebook.  I didn’t spend as much time as I usually do when I photograph a destination because I had already posted about most of them already.  I just wanted to capture the highlights of the foliage season.

One of my favorite places to visit is Dorrs Pond at Livingston Park in Manchester, New Hampshire.  It’s a relative easy walk or run with a mainly smooth, level one mile loop and, as an added bonus, it’s just over an hour’s drive for me.  There is usually lots of activity in the pond, especially during the spring and summer, and the trees provide for pretty colors as you can see above.

One of the things I liked best about the foliage at Dorrs Pond was the various colors.  The green from the pine and other trees whose leaves do not change blended beautifully with the red, brown, yellow and orange of the trees in full foliage.  I managed to make it to Dorrs Pond at peak or near peak foliage conditions.  I hope you enjoy.

Parking: You can usually find metered off street parking

I found this statue to be timely considering some of the discourse these days. The Grieving Gold Star Mother statue located, appropriately, across the street from the Veterans Memorial Park at Charles R. Stanton Plaza in front of the Radisson and JD’s Tavern at 700 Elm St, Manchester, NH, is a tribute to all mothers and families who have lost a loved one at war.

The Grieving Gold Star Mother shows the teary eyed mom clutching a telegram, presumably with the notice of her son’s death. A potted planted lies knocked over in front of a photo of her son.

The 407 pound bronze statue, sculpted by Andrew Chernak, was said to depict a mother from World War II because that is the war that had the most fatalities. However, the Gold Star Mothers group was formed by Grace Darling Seibold during World War I when her son, George Vaughn Seibold, was lost (his body was never identified). In an effort to console herself and other mothers who had lost a child during the war, Grace created the group. The group not only consoled each grieving mother. They also dedicated themselves to doing community service and visiting wounded service members.

Bricks with the names of all of the wars the United States have been involved in (Colonial and post Colonial times) have been placed in front of the statue. The list of conflicts and wars and the loss of lives involved in those actions are staggering.

The memorial in New Hampshire was erected in April 15, 2011. 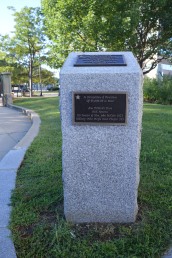 Cost: Free but you may have to pay for parking

Parking: Parking was ample when I went during a winter weekend day.

Arms Park is a unique kind of park.  In fact it’s not really a park at all.  A stream, fed by the Amoskeag Fishways, runs parallel to the park.  It is the perfect place for people who love the sound of water and watching waves (and based on my previous posts I know you’re out there).  There’s not much to Arms Park.  A parking lot takes up most of the area (which has led some to call it “Arms Parking”) and a few office buildings dot the landscape.  It’s certainly not one of the most picturesque landscapes but the stream and walkway does have a certain charm.  It is often used for observing important important days such as the annual Pearl Harbor Day observance event and the Fourth of July fireworks display.

The river is usually pretty rough and could consequently be dangerous if anyone got caught up it in.

It was still fairly cold when I went to visit, so the water which did splash on the railing quickly turned to ice. 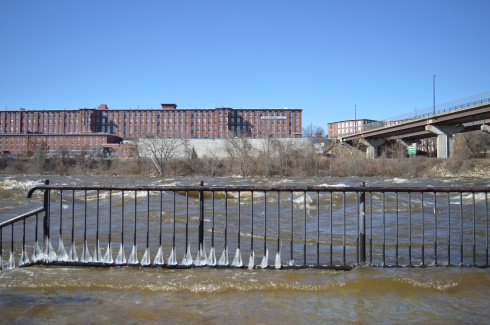 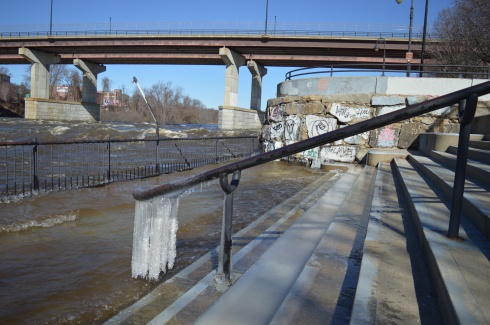 A variety of birds like to seek refuge at Arms Park.  I saw a bunch of gulls there during my visit.

Arms Park has a short walkway along the river with benches along the way.

The video below gives a better representation of the choppy water at Arms Park.

Parking:  There was not a designated parking area per se but there are many places to park on the side of the paved road leading from the entrance. 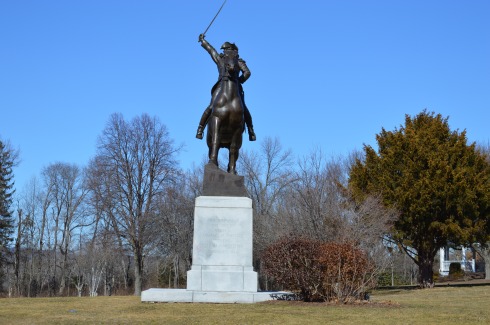 New Hampshire isn’t known as the “Live Free Or Die” state for no reason.  The quote, which is said to have French origins and adorns license plates and other kitschy souvenirs, is directly attributed to General, and former New Hampshire resident, John Stark.  It was at John Stark Park in Manchester, NH, that I found this historical tribute to the revolutionary warrior.

The remaining of the “live free or die…”quote is lesser known, yet just as poignant. 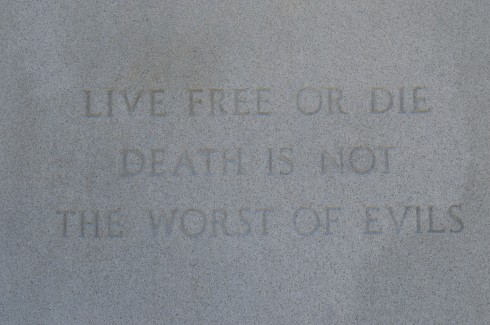 For someone who is so heroic and brave, General Stark is not someone who many of us are familiar with.  But, heroic he is.  As the plaque in front of his statue explains, after being kidnapped by a Native American tribe and eventually ransomed, Stark joined the American Revolution and became a general.  His most notable achievement was in 1777 when he commanded his troops to prevent British troops and supplies from connecting with the main army in Saratoga, New York, which was considered a key point which led to the American victory in the war.

Crisp blue skies awaited me at the park.  It almost felt fall-like.  What struck me most about the park was how peaceful it was.  The gazebo is a nice touch also.  The statue of General Stark was sculpted by Richard Recchia in 1948.  The park is one of the older parks in New Hampshire, dating back to 1893 (it is the second oldest park in Manchester).

General Stark his, wife and a few of their children are buried at the bottom of the hill from the entrance.

One of the interesting things about Stark Park is the loop behind the park.  It’s only about a quarter of mile and it is a great place to take your dog for a walk.  But, there is a trail that branches off to a bridge and some other trails which eventually lead to the Heritage Trail.  But, apart from some interesting trees and some wildlife, there isn’t much on the trails.  Most of them lead to residential areas.  I walked most of the narrow trails as far as I could go before they ended, rather disappointingly, at roadways and residential areas. 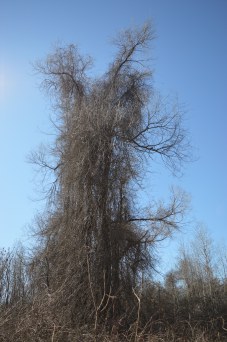 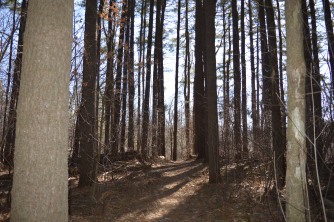 The big payoff to walking the loop behind the park was meeting Bennie.  Bennie is a Chinook which is the state dog of New Hampshire.

Parking: Off street parking and parking lots are available throughout the area

Dean Avenue, also known as the hardest place to find in Manchester, is home to Cat Alley – an alley full of cats.

I must have asked a dozen people for directions to this alley way until one older gentleman chuckled and sent me in the right direction.  A lot of people got it confused with the “Alley Cat” (a popular pizza joint in the area).  Don’t go there as it is not even close to the “Cat Alley.” The hidden alleyway is easy to miss.  It is located between Lala’s Hungarian Pastry (mmmm) at 836 Elm St and Alpha Loft at 844 Elm St.  There is a sign on the shingle of Lala’s indicating Dean Ave. 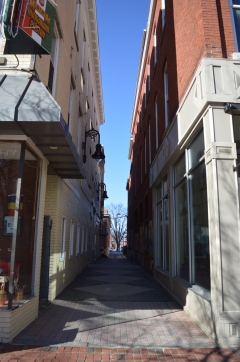 There are cats everywhere in Cat Alley.

The name “Cat Alley” precedes the art on the walls.  According to legend, the name was derived from a business man witnessed two stray cats duking it out.  I sure wish he had broken it up.  At any rate, after noticing the alley way, which I might not recommend walking down too late at night, a business man decided to raise funds and hire street artists to give the alley the look it deserves.  Below is a slideshow of all of the art as well as a video of a walk through of the alley.

Cat Alley isn’t the only place I found graffiti, much to the chagrin of many Manchester residents I am sure.  I found this mural on Manhattan Lane, a side street parallel to Elm St.  This mural is spot on, minus the recycling bins.  From left to right is the “Man In The Mountain” (which, as a child, I used to call the “Old Man In The Mountain”) – a rock formative created by wind, erosion and other weather factors on the side of a mountain and which collapsed on May 3, 2003.The state flower is represented as purple lilac.  The rest of the mural is also emblematic of New Hampshire; a purple finch (which does have a reddish look) and a covered bridge which is a staple of New Hampshire.

This is another piece of graffiti I found on Manhattan Lane.

I saw a lot of photo-worthy things during my visit.  I will be posting more from my trip soon.  Don’t forget to “like” me on Facebook here to see photos and videos I don’t post in my blog posts.  Thank you!