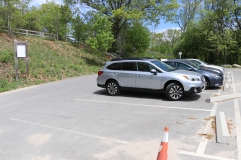 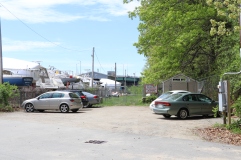 Handicapped Accessible: Yes, the main trail is handicapped accessible.  The side trails are not accessible due to the rocky trails and steep inclines.  There is ramp to the right of the staircase to the trail at the parking area.

Once the site of a grand railroad that ran from Boston to sections of Boston’s North Shore and New Hampshire, the Eastern Marsh Rail Trail is a true gem of the coastal section of the north shore (cities and towns north of Boston).

The railroad, which would be extended over time, began operating from Boston to Salem in 1838.  It would later be extended to Salisbury and other territories in Massachusetts and New Hampshire in 1840.

Alas, the last train crossed the Merrimack River in 1965, leaving behind abandoned rail lines.  Eventually, it was proposed that the rail lines should be converted to rail trails.  Now, many decades later, instead of being used by noisy engines often carrying dangerous cargo, the rail lines are being used for exercise, dog walking and just enjoying nature.

The 1.4 mile Eastern Marsh Trail connects to the Clipper City Rail Trail  to the south and the Ghost Trail to the north.

The Eastern Marsh Trail, which is part of a system of trails along the coastal north shore which includes Newburyport and Salisbury.

The trails at Eastern Marsh Trail are flat with no significant inclines. 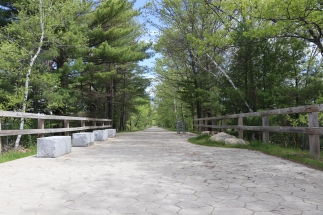 The Stevens Trail is a short trail (about .4 mile) that hooks up back to the main trail.  There are some views and a cute bridge along the trail.  You may see a few chipmunks along the way.  It has some minor inclines but I would classify it as easy.  This trail is not handicapped accessible due to the rocky terrain and a bridge that only has steps and no ramp. 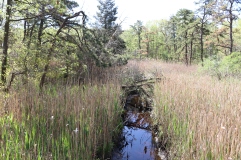 The views along the trail are beautiful. 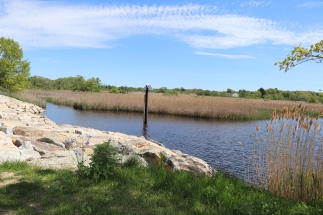 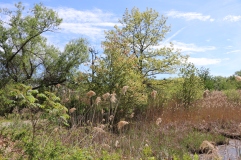 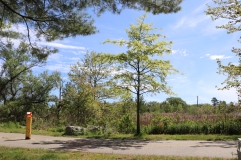 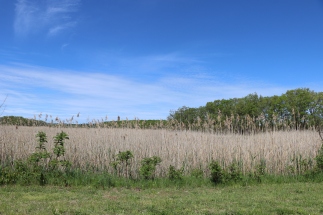 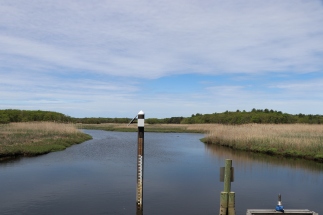 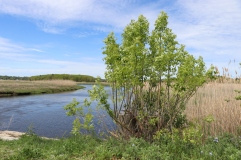 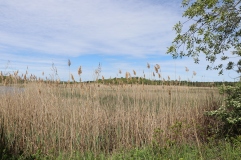 There are still remnants from the original railroad at the beginning of the trail.  Maybe some day they will revive the rail! 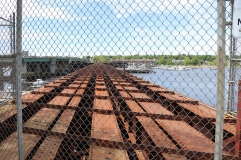 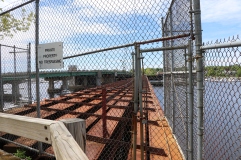 This mural from the Salisbury Art Stroll held on May 13 was still remaining along the trail.  I just missed it by a week.  But, I may have to drop by next year to check out the art on display.  This mural was a collaborative effort worked on by a group of artists. 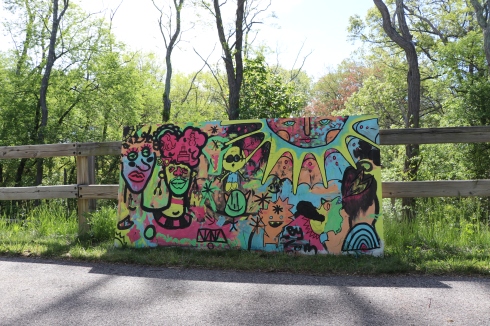 There were lots of little critters on and off the trail.  I would hear rustling in the trees or bushes in one direction only to be distracted by some other sound of activity in another direction. 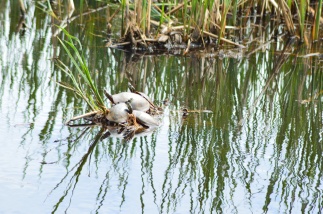 are just a few of the animals you may see on the trail.

But, birds, chipmunks and turtles aren’t the only animals who frequent the trail.

The trail is a popular with dogs and their walkers.

I love the “side eye” Peter, a 14 year old Golden Retriever, was giving his human walker in the first photo.  All he wanted to do was greet me and say hi.

I love how May’s white fur looked against the background.  May is a 6 year old Golden Doodle. 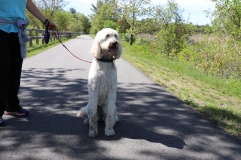 Look at the big smiles on Mako (on the right) and Murphy (on the left)!  Mako is 6.5 years old and Murphy is 7 years old.  They are both Labradors. 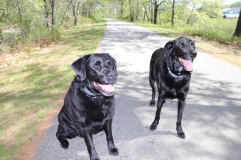