Parking: There are a few different parking areas.  The main parking lot on Western Ave has room for about 200 cars.

Handicapped Accessible: The playground area, fields and picnic areas are but the trails and many of the walkways are not.

Often considered the jewel of Westfield, Massachusetts, Stanley Parkis one of the prettiest parks in Western Massachusetts and it looks even more picturesque after a snowfall.

Due to the recent cold spell and snow, the pond and much of the vegetation at Stanley Park had been iced over so they were eager to get some food.  As a disclaimer, most parks do not encourage you to feed birds.  But, if you do, there are certain foods you should never feed to ducks.  Bread is the biggest no-no on most list.  These are some better foods to feed to birds.

At any rate, visitors like to feed the birds at Stanley Park and that gave me an usually good chance to photograph some beautiful ducks. 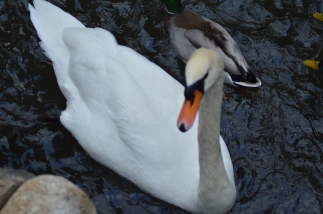 There were so many birds congregating at the pond waiting for a nibble of food. 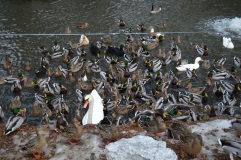 Luckily, one of the visitors at the park, Jim, brought some food for the hungry birds. 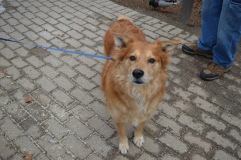 I have photographed Stanley Park before and, since it is very close to my mom’s house, I always try to make a visit out there as often as I can.So, you may sees posts about this park from time to time.

Stanley Park, or Stanley as it is more commonly known as, is a popular spot for dogs like Sansa is a 5 month old Siberian Husky.

Below is a video of feeding time at Stanley Park:

Handicapped accessible: Yes, but not on the hiking trails

Formerly known as Benson’s Wild Animal Farm and later New England Playworld, Benson Park was once a vast zoo that entertained countless visitors with their animals and attractions.  The zoo may no longer be there but Benson Park still entertains visitors with its natural beauty. 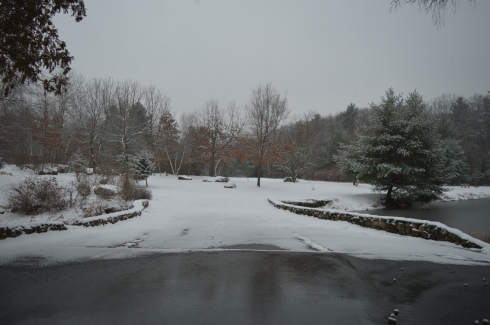 Benson Parkwas bought by the state of New Hampshire and then transferred to the town of Hudson in 1998.  It has since been converted to a play area and nature center.  However, some remnants of the zoo remain which you will see later in this post.

The trails at Benson Park are easywith a few inclines.

The park now boasts a 3 mile loop and several ponds and streams.  The ponds were partially frozen due to the cold weather and snow that was falling.  It created some interesting shapes on the ice. 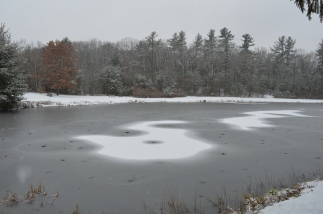 The park is a wonderful place for birding.  There are a wide variety of birds at the park from egrets to much smaller birds like cardinals and robins.  Cute birdhouses are scattered throughout the park to attract birds. 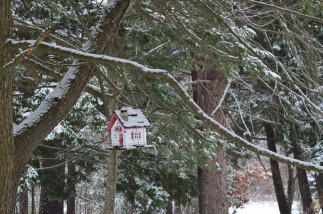 It snowed earlier in the day and it was still snowing when I arrived at Benson Park.  The snow made the views at the park even prettier than usual. 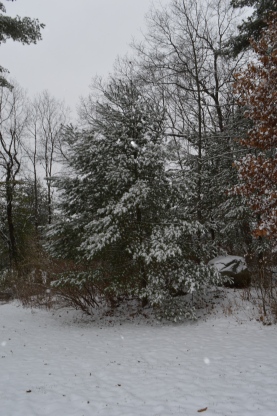 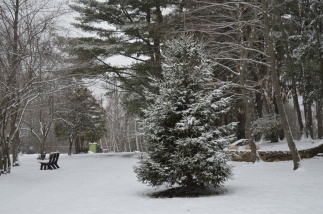 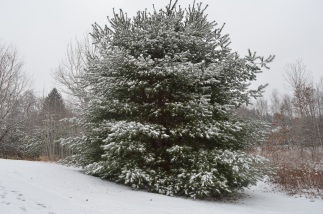 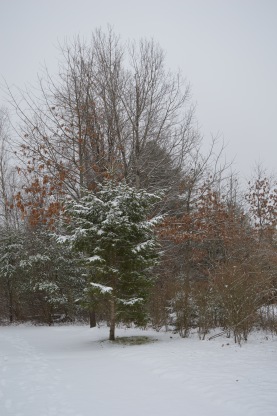 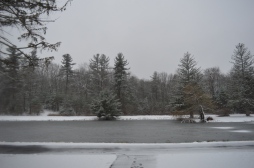 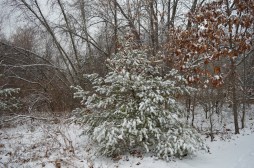 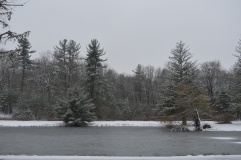 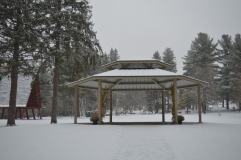 I hope momma bird took her chicks out before all the snow.

While I didn’t see any wildlife, I did see lots of evidence of them in the snow.  I would have loved to see just one of them up close. 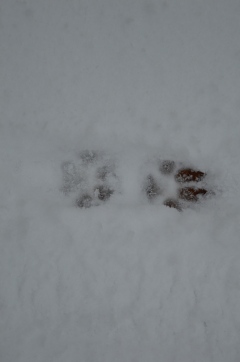 The first thing you’ll notice as you enter Benson Park is the tasteful and somber September 11th memorial.  Since some of the planes involved in that fateful day left from Boston’s Logan International Airport, some families in New Hampshire were directly affected.  In fact, David Kovalcin, a resident of Hudson, was on Flight 11, the plane that crashed into the North Tower at the World Trade Center.

The memorial consists of several stone markers with the times and locations of each attack.  A clock with the accurate time of each attack is engraved at the top of each monument.  There is also a monument to each branch of the military that works to keep us safe.

There are benches surrounding the memorial to sit and reflect. 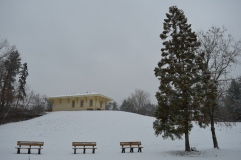 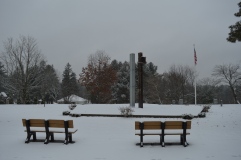 On a happier note, just beyond the September 11 memorial, there is a play area for children.

Just past the playground area is the “Gorilla House.”  Tony the Gorilla used to live in this cage when the park was a zoo.  The sign on the wall at the Gorilla House states that he used to watch tv and play in the Gorilla House when the area was a zoo.  But, I couldn’t feel anything but a little sad and bothered by it.  I know that is how we treat animals (which is a whole other issue for me) and he most likely was treated well enough.  But, I always find it bothersome to see a majestic animal like that confined in such a way.  The perspective you get from looking out through the bars from his view is poignant.  In any case, children enjoy playing inside the cage and I think Tony would have liked it that way.  A mural of what appears to be Tony is painted on the wall.

Fun fact: Colossus (aka Tony the Gorilla) ran for President against Jimmy Carter and Ronald Reagan in 1980.  Rumor has it voters didn’t agree with his pro banana free trade stance.

Another fun attraction for children (or young at heart adults) is the Old Woman In The Shoe, baased on the nursery tale of the same name.  The attraction is actually considered a historical monument.  It’s slightly larger than my apartment. 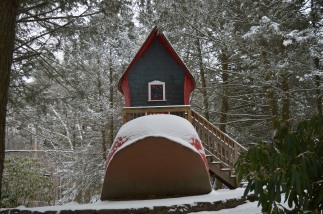 Benson Park is a great place to take your dog.  I saw a bunch of cute dogs during my visit.

Kuma (Japanese for “bear”), a 10 month old Akita from Maine, had fun playing in the snow. 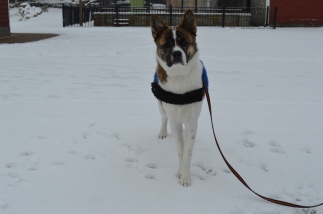 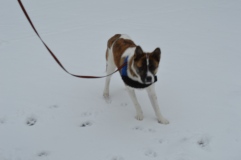 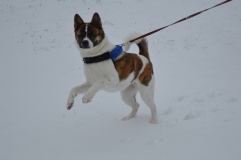 Issy (short for Isabel), a 1 year old Lab mix, posed perfectly for me! 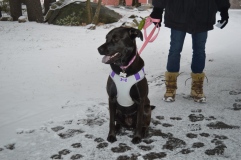 On my way to my car I saw this cutie.  Daisy is a 4 year old Yellow Labrador.

Please connect with me on Facebook to view photos, videos and other content not included in this blog: New England Nomad 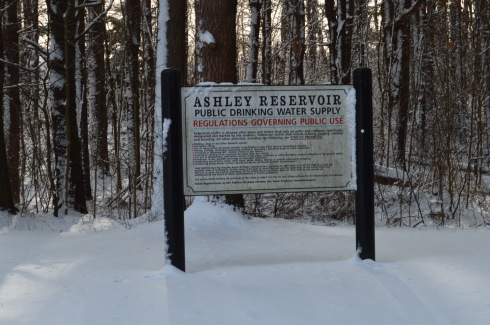 Parking is limited.  There are about a 10-20 parking spaces but many people park sideways rather than horizontally since there are not clearly defined spaces in the lot.  So, sometimes only a dozen or so cars can fit in the lot.  It’s best to get there early in the day.

No dogs or fishing are allowed since it is a reservoir.

Ashley Reservoir is a photographer’s dream destination.  You don’t have to try hard to find pretty places to shoot.  One of the things that stood out from my shoot was just how much the weather changed in the hour and a half that we spend there.

Ashley Reservoir is a 4 mile loop (there is a shortcut you can take that is about 1.5 or 2 miles).  The trails are well defined and, when there isn’t snow and ice on the ground, would be easy to navigate. 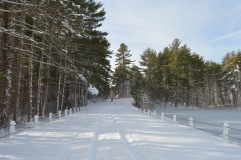 One of the many interesting parts to the trail are the paths that seem to cut across the reservoir and connect back to the trails. 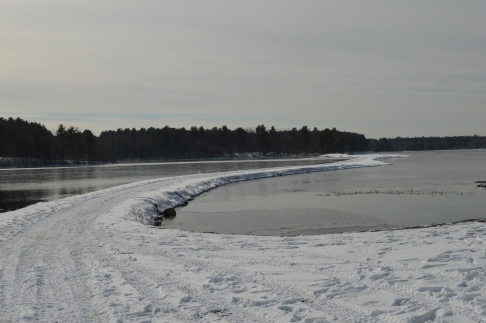 The photo below was not doctored.  It is the particles in the snow as the sun melted the snow.  But, I thought it looked pretty cool.  The last video posted below shows these sparkles.

Since it is a popular destination for runners, walkers and nature lovers, the geese, ducks and other birds are not as skittish as they are in other parks and reservoirs.  It was luncj time for the geese.  The last video at the end of the post shows the sparkling snow.

Now, this is what I call a cluster duck.

Despite the cold temperature and the icy trails there were several runners out at Ashley reservoir.

The trees and plant life were grand even during the winter when some of them were bare.

Check out the videos below for more fun from Ashley Reservoir

stop by my Facebook page for my photos and fun stuff!