Just outside of Worcester Common, at 455 Main St, sits an unusual monument.  Also known as “Turtle Boy”, the Burnside Fountain looks like a cross between a Roman sculpture and a high school prank gone wrong.  But, this statue is no prank.  It is a very real monument.  In fact, it is a gift from Harriet Burnside,  a philanthropist and the daughter of a prominent lawyer in Worcester; Samuel Burnside.  In her will, Harriet donated $5,000 to the city to build a fountain in memory of her father.  Harriet Burnside specifically requested the fountain be used as a drinking trough for horses and dogs.

Enter Charles Y. Harvey. Harvey was given the task of designing the fountain.  For some reason that is still unknown, he chose a design called “boy with turtle”.  Henry Bacon, who also worked on the Lincoln Memorial, designed the basin.

In an interesting turn of events, Harvey would take his own life, claiming before doing so that the half finished sculpture was telling him to do so.  Sherry Frye finished the sculpture.  The statue was completed in 1912.

The bronze statue sits on a pink rectangular basin.   The basin has four bowls, two on each side of the statue.

Despite the various interpretations, the statue is not meant to be as controversial.  It was just meant to be a statue about a boy and his turtle.  It was a simpler time. 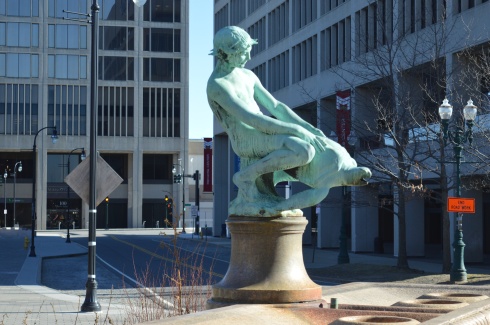 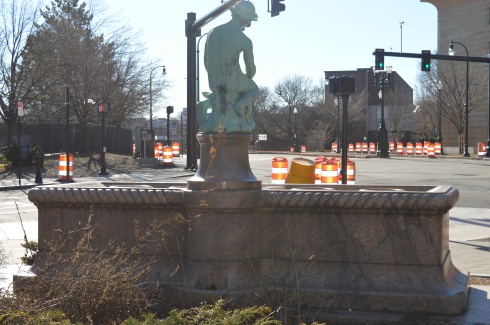