Highlights: 32 foot tower at Hubbard Park that offers views of the Hartford, CT skyline and Mount Tom in Massachusetts as well as the Meriden, CT area

As if the wide trails, beautiful scenery, assortment of birds and Mirror Lake at Hubbard Park wasn’t wonderful enough, there’s one more jewel of the park that takes a little bit more effort to get to.  But, it’s worth the trek.

Located atop Hubbard Park in Meriden, CT, Castle Craig offers expansive views of the Hartford skyline, the Meriden, CT, area as well as views of Mount Tom in Massachusetts.  And, on a clear, day Long Island Sound is said to be visible.

The 32 foot tower stands on a 976 foot East Peak.  It also has the distinction of being the highest point 25 miles of the east coast from Maine to Florida, according to the plaque (although this claim has been challenged – in any event it’s pretty high up there!).  To be more precise, it would be fair to say East Peak is the highest peak closest to the Atlantic between Maine and Key West

You can either hike to the tower (the trail is open to hikers year round) or drive to the tower on Reservoir Rd (the road is open to vehicles from the beginning of May until the end of October).  We decided to drive to the top.  The road is a two way road.  So it can be narrow in some spots.  There are some nice spots to stop and look around but it’s hard to find spots wide enough to pull over.  I was able to take a photo of this body of water on the way up.

The origin of the name and design of the tower are in dispute.  Some claim it is named after a similar castle in Scotland called Craigellachie.  Others claim Hubbard was inspired by a Norman French Tower.  Still others argue that it is modeled after a 12th Century Turkish tower on the Danube.   As you can see it’s a hotly contested point of interest.

The paved trail to the tower is 3 miles each way, although there may be some nature trails you can seek out.  The trail difficulty is medium with a few steep inclines.  But, I did see people of all age groups and apparent fitness levels (I even saw one person with a knee brace and other people with other injuries) make their way up.  We would have hiked it if we had the time to do so.  So, pretty much anyone can make it to the tower.  Just be prepared if you do as it can be challenging in some areas.

The parking lot at the tower is pretty big (there is room for about 40-50 vehicles).  But, it seems most people choose to hike or even jog to the top.  In fact, we saw dozens of walkers on our drive to the top and only half a dozen cars in the lot at the tower.  Kudos to Connecticut for being such health nuts!

The tower and a rock with information about the tower are only a short walk from the lot.

Six flights of stairs takes you to the top of Craig Castle. 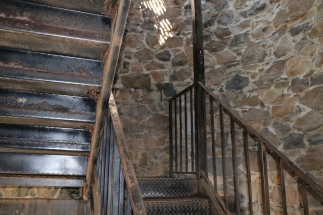 The views from Castle Craig are jaw dropping. 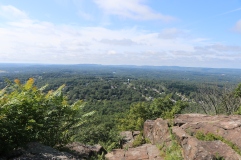 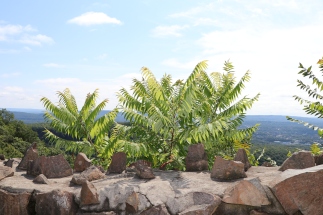 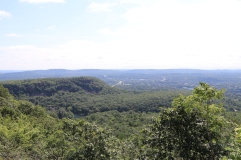 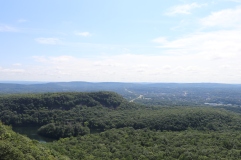 While I was walking to my car, I saw this grasshopper trying to blend into his or her surroundings. 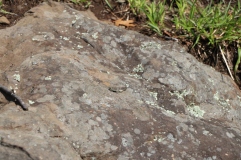 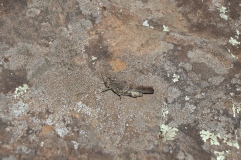 Below is a video taken from the tower.

Today’s featured link is Hiking 101 who blogged about her Castle Craig Hike.

Hiking 101 posts about hikes in various locations in Connecticut and other areas as well as other mainly hiking related topics.