Cost: Free unless you want to photograph the statues inside the Langdon House

Parking: There are several parking lots (notably the free parking lot next to Citizens Bank on Pleasant St) and street parking available throughout the city

Handicapped Accessible: The outdoor exhibits are but the Langdon House is not handicapped accessible.

Highlights: sculptures displayed on the grounds of the Langdon House 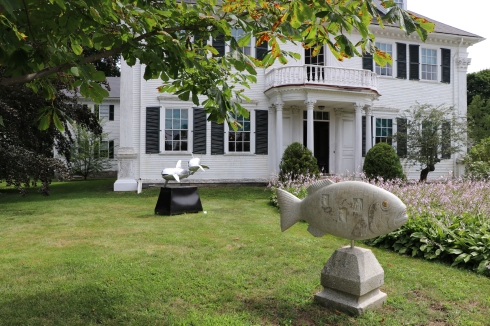 Land meets shore at the latest sculpture exhibit at the Governor John Langdon House in Portsmouth, Hew Hampshire.  The “Sea To Shore” sculpture display currently on display on the grounds and in the Langdon House.

The exhibit, which is on display until October 15, uses stone, metal, wood and other materials from the New England area with many of the themes of the New England seacoast.  The exhibit includes 45 pieces from

This sculpture titled “Fish With Travelers”was made out of granite by stone art enthusiast Thomas Berger. Talk about a fish out of water. 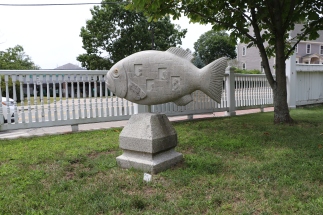 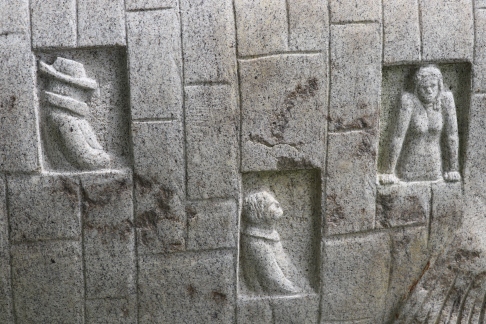 There are 10 more sculptures shown below that are on display on the grounds at the Langdon estate. 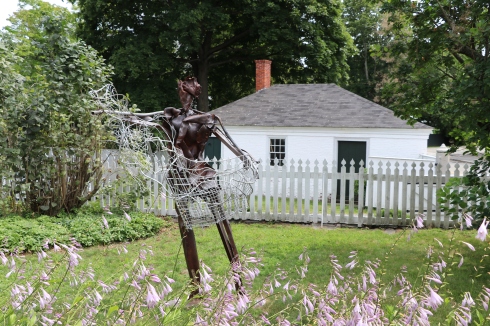 Fisherman by Madeleine Lord made of welded steel.

Backstroker by David Adilman is made of Vermont gray marble. 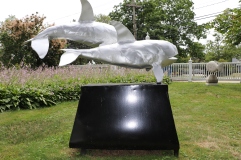 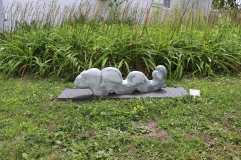 Serpentine by Irene Fairley made from Vermont marble. 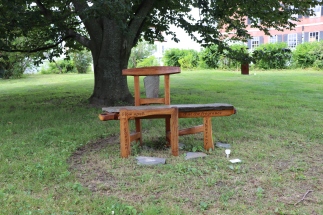 Fragrant Flow by wood artist Jeffrey Cooper made of teak and bluestone.

Moon Swings by Douglass Gray  made of steel. 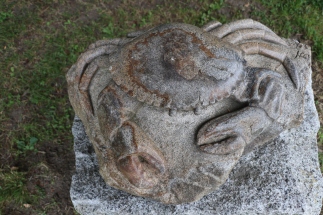 Brown Crab by Thomas Berger made of fieldstone. 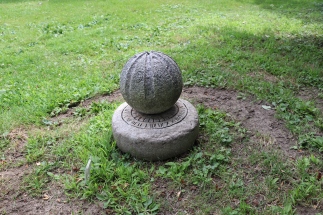 Urchin Sphere by Karin Stanley made of granite. 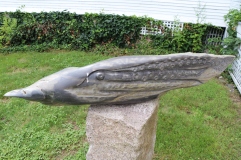 Genetically Modified Squid by Thomas Berger made of fieldstone.

Vertical Water” by Karin Stanley was not being displayed when I took the photos of the outdoor sculptures.

Inside the Governor John Langdon House there are many more sculptures.  You have to buy a ticket to view the sculptures (a tour of the house is included…blog post about the tour to follow soon).  I gladly forked over the $15 for the both of us to view them.

There are 34 sculptures displayed in the first floor parlor, hallway and dining areas.

Net by Amanda Sisk is made of mixed media. 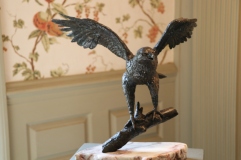 Forever Free by Pete Spampinato made of bronze with an alabaster base.  Pete tends to feature animals in his work.  He says he did not begin sculpting until he retired.  He was inspired by the hardships animals had to endure during a trip to Africa. 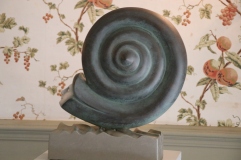 Colossal Shell Goddess by Lindley Briggs made of resin and apoxie.  Lindley, in contrast to Pete, says her interest in the human figure has been rekindled.  Lindley says, “the boundaries between fantasy, reality and surreality are not necessarily firm.” She enjoys exploring these boundaries in her work.

Carousel Lobster by Jeffrey Briggs is made of fiberglass and resin.  Jeffrey builds carousels of all varieties as well as other works of art.  His latest work can be found at the carousel on The Rose Kennedy Greenway in Boston.  He often collaborates with Lindley (the sculptor featured above his sculpture).

Birds Of a Feather by Douglass Gray made of steel.

Gull by Alan Weinstein made of plaster and paint with a granite base.  Alan mainly paints.  But, he has branched out with his sculptures.

Madonna 3 With Gorilla by Jeffrey Cooper made of cherry wood.  Sounds good enough to eat.

Sirena & Consorts With Sea Of Shells by Lindley Brigss made of apoxie and cast marble.  I especially like how the gorilla appears to be looking at the woman quizzically in the statue in the last photo.

Slaveship HMS Brookes by Martin Ulman made of mixed media.  The 43.5″ high ship sculpture was modeled after the British slave ship, “Brookes.”  The slave ship was used during the 18th century and it was said to carry 484 people, although it carried many more than that according to ship records and stories told by sailors.  The conditions were dreadful as Maya Angelou’s quote expresses.

Neptune by John Vasapoli made of oak.  John says is love of sculptures and his love for music have been the main factors for driving his creative energy.  John has sculpted many statues of iconic musicians and singers such as Miles Davis and Duke Ellington. 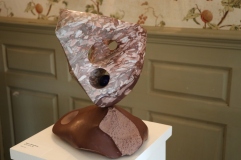 Secrets Of The Sea by Nancy Diefenbach is made of marble and glass.  She says her joy is creating one-of-a-kind artworks in marble.  She likes to shape her thoughts through her carvings.

Water Muse by David Adilman is made of limestone.

Water Nymph by Elise Adams made of alabaster.  Elise began her career as a sculptor after working 30 plus years as a chiropractor.  Art had always been a love of hers.  But, she was discouraged from following this career path while she was growing up.  I think it’s fair to say we’re all happy she did change her career path. 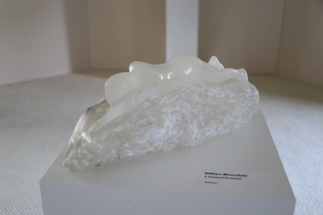 A Vineyard Excursion by William Bloomfield made of alabaster.  After taking a stone carving course in the 70’s, William says he was hooked.  However, “life got busy” as he put it and he did not take up sculpting until 2006 when he enrolled in some classes at The Chautauqua Institution’s School of Art.  He says that from his initial exposure to stone carving more than 30 years ago he discovered that an essential element of my creative process is to let go of any preconceptions he might have of what the stone might evolve into before I put chisel to stone. 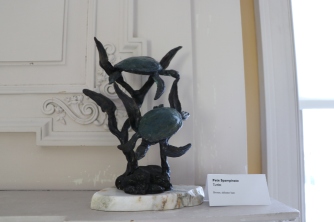 Turtles  by Pete Spampinato made of bronze with an alabaster base.

Pastry Chef by Susan Neet Goodwin made of clay and multimedia.  Susan says her first piece that included the human face was a response to the Iranian hostage crisis. Since then many of her sculptures have become vehicles for political and humanitarian concerns.  As you may notice by herr other works of art, Susan’s art has a certain theme through it. 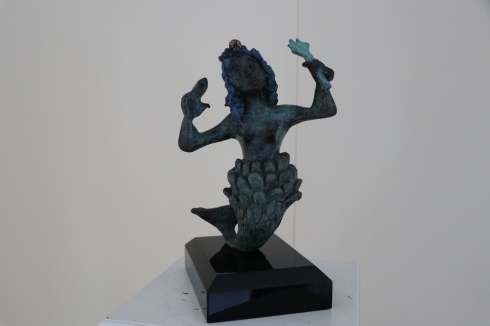 Mermaid With A Trident by Mara Sfara made of bronze and marble.  Mara says her art offers a glimpse into the lives and feelings of the gods and goddesses from Greek mythology.  She also likes to inject humor into her pieces.

Valley by Danielle Gerber made of copper.  A native of New Hampshire who moved to Maine, Danielle says her body of work is spurred from her love of forming metal and the natural patterns created through water and wind erosion. 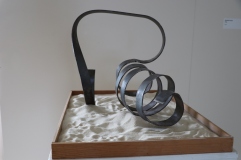 Rolling Wave by Judith Morton made of steel, wood and sand.

Hump  by Derrick Te Paske madde of butternut.  A professor at Framingham State University, Derrick says he is  primarily concerned with theoretical principles and digital production/reproduction methods. His art involves wood and other common tangible materials while employing tools and processes which are decidedly low tech, and results in unique and very physical objects.

Follow Your Dream by Melanie Zibit made of bronze and marble.  Melanie compares the sculpting process as being similar to writing a thoughtful essay or cooking a good meal for those you care about.  She says the process of creating art is like an act of love because you are sharing something deeply personal from one human being to another and sharing something personal spiritual and beautiful. 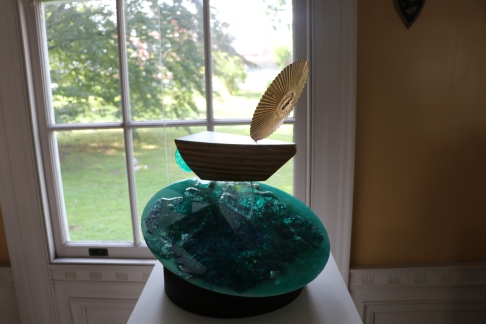 Circle Sea by Dan Rocha made of wood, metal, metal leaf and plastic.  A Massachusetts resident, Dan has won a number of awards for his works of art.

Eagle Ray by Irene Fairley made of red Tenneessee marble.

Eastport Cannery Worker  by Susan Neet Goodwin made of clay and multimedia. 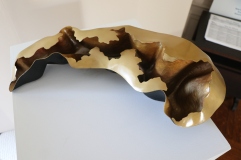 Canyon by Danielle Gerber is made of bronze, brass and spray paint.  This sculpture shares the same theme as her other sculpture, Canyon.

Synthesis  by Kathleen Brennan made of hydrocal plaster.  Kathleen has several exhibitions currently on display throughout Massachusetts and New Hampshire. 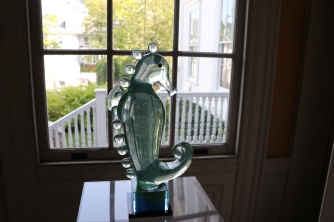 Seahorse Green by Mara Sfara made of lucite and gemstone. 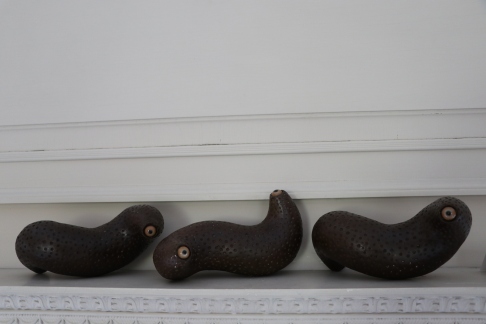 Binocular Beasts by Derrick Te Paske made of cast bronze and glass eyes. 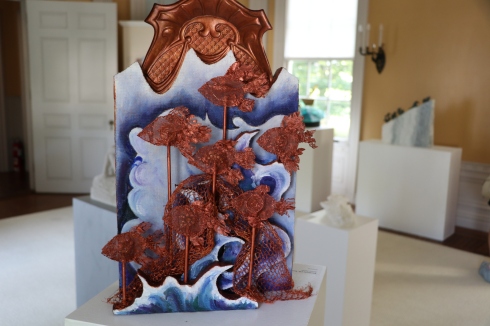 Aureus Piscari  by Kimberly JB Smith made of multimedia items (it is a 2 sided display).  A resident of New Hampshire, Kimberly is most known for her 2d and 3d compositions that include recycles and repurposed materials.  She uses paint, paper pulp and collage to create traditional and nontraditional materials in her creative process.  When she isn’t creating art, she enjoys teaching and publishing educational articles. 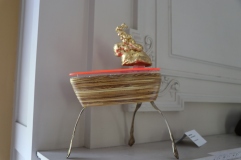 Homer’s Boat With Siren by Dan Rocha made of wood, metal, metal leaf and plastic.

Colossal Shell Goddess by Lindley Briggs made of resin and apoxie.

Wave by Valery Mahuchhy made of resin.  Valery says he knew from an early age he wanted to be a sculptor.  His art is on display all over the world.

Eve On The Beach by Josie Campbell Dellenbaugh made of bronze.  Originally from Albany, NY, Josie is best known for her stone carving.  One of her more prominent carvings is the Monument For Our Native Peoples in West Rutland, Vermont. 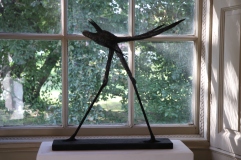 Heron Annoyed by James Pyne made of composite materials.  A resident of Maine, James focuses on birds in his art.  He describes birds as, “the most beautiful creatures on Earth.”

Dogs are not allowed in the Langdon House.  But, I did see a few dogs while I walked to the house.

This little cutie named Izzie is a 6 year old Havanese.

Today’s featured New England based photographer is Eric Gendron. Based out of Portsmouth, New Hampshire, Eric photographs all over the New England area.  But, he primarily shoots in the New Hampshire and Maine area.  What I like most about his photography is that he can take the ordinary, like a park bench for instance, and turn  it into something beautiful and majestic.  You can follow him on Facebook here.