Parking: there is street parking (75 cents for a maximum of 4 hours) if you get there early.  Otherwise, there are several parking lots and garages that charge $20 for the entire day of parking.  Generally, I park at the Museum Place Mall at Church St since it is closest to all of the attractions in Salem and within walking distance to the Witch House

Dog Friendly: No, although service dogs may be allowed 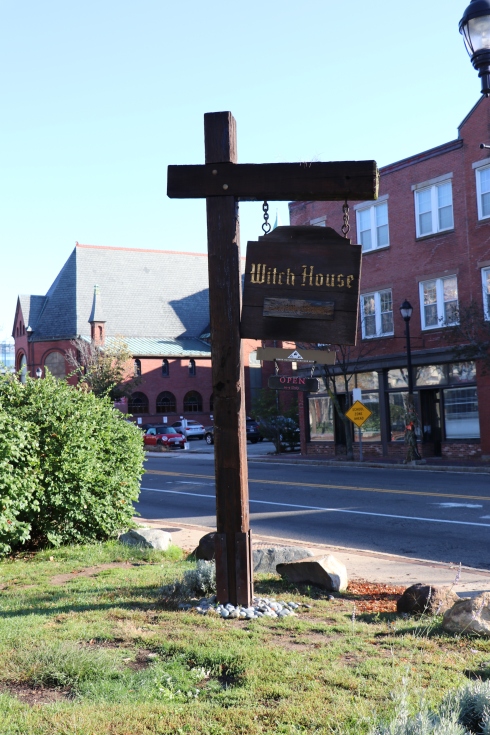 “It’s October”, a passerby yelped to a disgruntled driver as he barely squeezed his sedan into the last available street parking spot.

Yup, it’s that time of the year again in Salem, Mass.

Although Salem has proven itself to be so much more than just an autumn destination, fall is still Salem’s biggest time of the year.

It’s unfortunate much of the draw to Salem is related t the witch hunt of 1692.  However, it does provide a learning opportunity and it also gives us a chance to remember the past in the hopes it won’t happen again.

One of the best places to get a no frills education about the Salem Witch Trials is the Witch House on Essex St., just one mile away from the actual hanging spot of these accused witches. 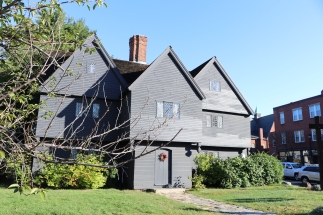 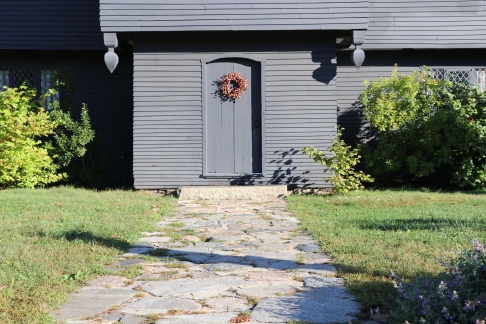 The last standing building directly related to the Salem Witch Trials, the Witch House has a dark, storied history.

As I walked around the house I couldn’t help but think of the innocent people who had been tortured into confessing and the backdoor deals that were made to avoid being accused or convicted of being a witch.  In this very room, John and Elizabeth’s (his wife) parlor or best room, people’s fates were sealed.  In total, 24 people would either be hung (19 in total), 1 person was pressed to death and 4 people died in prison. 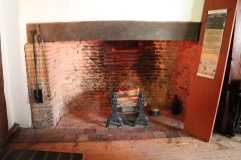 The home was bought in 1675 by Corwin, a local magistrate, and his wife Elizabeth (Gibbs).  Elizabeth was a wealthy widow having been previously married to Robert Gibbs.  They would have 10 children together.  Six of their children would die before the age of 25.  Only 2 children lived long enough to have families of their own.

The other room on the first floor showcases many of the tools and herbs used during that time.  As you can see in some of the photos, each historical artifact has a sign or placard next to it with an explanation or story behind the piece being displayed. 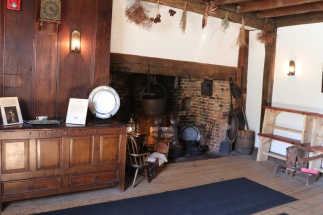 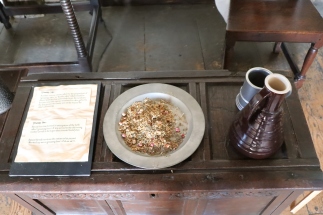 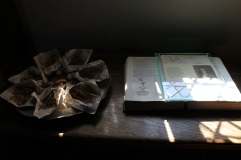 The Witch House has six rooms (if you count the foyer areas on two floors.  While not all of the items in the house are directly from that time, many of  the items in the building closely mimic the items of that era.

These chairs, for instance, are very similar to the chairs and tables used that time.  In fact, the 5 chairs at this table are symbolic of the 5 judges (out of 9) needed to convict someone of being a witch at that time.

On the table are copies of the pages of journals, diaries and court records of the inquisitions and court proceedings.

Judge Johnathan  Corwin, who resided here, was said to have questioned the accused at times using extreme measures such as tying people’s arms behind their backs to a chair similar to this one.  It forced more than one innocent person to confess.

The windows and furniture featured in the house are very well crafted. 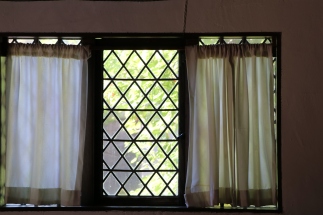 In the first room of the first floor there is a sealed off area that shows the inside of the walls.  The architecture of that day may be outdated but it still holds up to this day. 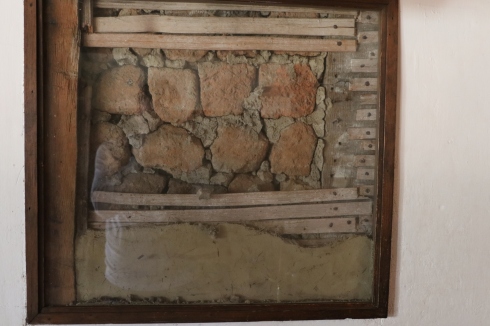 Up a short, narrow, windy staircase, the second floor has two bedrooms.

In one of the rooms sits a machine for sewing or knitting.

This doll,  also known as a poppet, which was found in the wall of Bridget Bishop’s home, was said to have been a voodoo doll.  The catch is that most people at that time left these types of dolls in their walls as a sign of good luck.  Instead, In Bridget’s case, it was said to have been used to curse others.  Cute little fella, isn’t he?

Dogs are not allowed in the Witch House (exceptions may be made for service dogs).  But, I met Abita, a 3 year old Lab mix, on my way to the house.  Abita was adopted from the Northeast Animal Shelter in Salem, MA.  What a cutie. 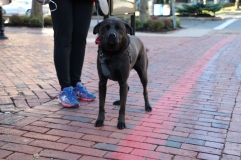 The video below comes courtesy of samuelaschak. It gives a more detailed historical background of the building and the historical highlights of the Corwin family and Salem.

Hi I'm Wayne. Welcome to my blog. I am a true New Englander through and through. I love everything about New England. I especially love discovering new places in New England and sharing my experiences with everyone. I tend to focus on the more unique and lesser known places and things in New England on my blog. Oh yeah, and I love dogs. I always try to include at least one dog in each of my blog posts. I discovered my love of photography a couple of years ago. I know, I got a late start. Now, I photograph anything that seems out of the ordinary, interesting, beautiful and/or unique. And I have noticed how every person, place or thing I photograph has a story behind it or him or her. I don't just photograph things or people or animals. I try to get their background, history or as much information as possible to give the subject more context and meaning. It's interesting how one simple photograph can evoke so much. I am currently using a Nikon D3200 "beginner's camera." Even though there are better cameras on the market, and I will upgrade some time, I love how it functions (usually) and it has served me well. The great thing about my blog is you don't have to be from New England, or even like New England to like my blog (although I've never met anyone who doesn't). All you have to like is to see and read about new or interesting places and things. Hopefully, you'll join me on my many adventures in New England! END_OF_DOCUMENT_TOKEN_TO_BE_REPLACED
This entry was posted on Friday, October 13th, 2017 at 12:51 am and tagged with dog, Historical, Massachusetts, New England, photographs, Photography, photos, Salem, salem Witch Trials, Witch House and posted in dog, historical, Massachusetts, New England, photographs, photography, photos, Salem, salem Witch Trials, Uncategorized, Witch House. You can follow any responses to this entry through the RSS 2.0 feed.
« Pinchot Sycamore Tree Park (Simsbury, CT)
It’s Alive! Part I (Salem, MA) »