Dog Friendly: Yes, although it’s not stated specifically on the website for the event, I saw a few dogs there

Summary: the city of Westfield, MA celebrated its 350th birthday with their first “First Night.” The first night celebration included a variety of family friendly events and activities on New Year’s Eve. 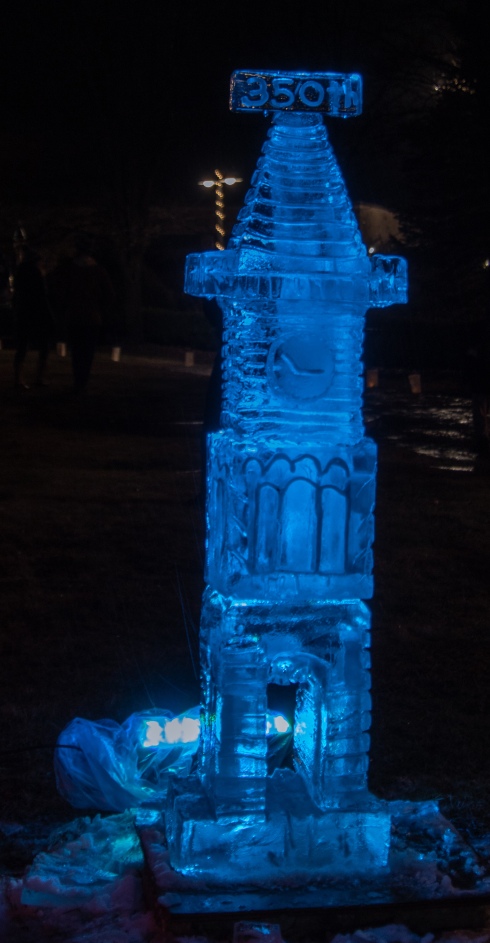 Yes, in 2019, well now, Westfield MA is celebrating its 350th anniversary.  There will be sure to be other commemorative events.  But, the kick off celebration was actually in 2018 albeit on New Year’s Eve.

It was the first first night in the city of Westfield and they pulled out all the stops.

I particularly liked how the the lighting around the ice sculptures changed colors.  the 350 on some of the sculptures signified the 350 years of the city of Westfield. 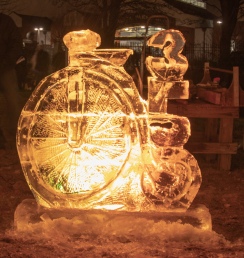 Guests were able to skate for free (some better than others).  I’m always impressed whenever I see someone do something that requires a special skill, particularly skating.  I never learned. But, maybe some day.  It’s also inspiring and fun watching people try. 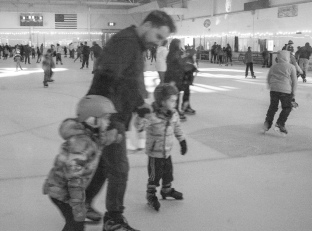 This activity was a little different.  I’m not sure what it’s called.  But it looks fun and the kids enjoyed rolling around in the balls. 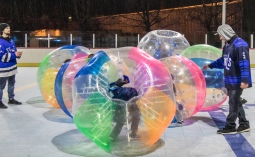 The Witches Of Whip City were also at the event.  “Whip City” is a reference to Westfield’s nickname which is a reference to their past.  During the 19th century, Westfild was a leader in the buggy whip industry.  Things have changed and there is currently only one whip business in the area (Westfield Whip https://www.westfieldwhip.com/).  But, the city has retained this title.  It is why you may see some businesses with the name “Whip City” attached to it (Whip City Music, Whip City Brewing, etc).  I will delve into this and other historic New England historical factoids later in a new feature to my Facebook page that I will discuss on that page later. 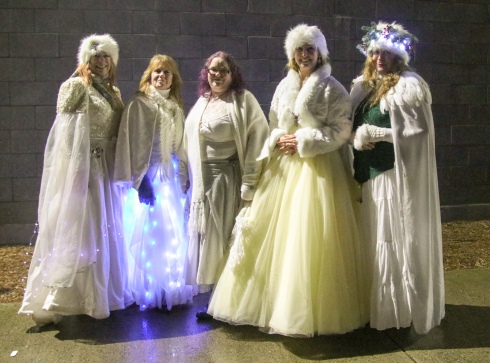 Unfortunately (and of course), it began to rain during the event, proving the old New England weather cliche to be true (“don’t like the weather? just wait a minute”).  So I was unable to photograph some of the other attractions there such as a multi layered cake that was, unfortunately, made out of wood.  There was also campfires for toasting marshmallows and Smores which, obviously, weren’t very useful during the rain.

It’s unclear whether the city will continue this festivity in the future.  But, based on the turnout and the fun had by all I would say it is likely.  And I’ll be there.  Maybe I’ll bring my skates this year!

Things To Do In The Area:

Hi I'm Wayne. Welcome to my blog. I am a true New Englander through and through. I love everything about New England. I especially love discovering new places in New England and sharing my experiences with everyone. I tend to focus on the more unique and lesser known places and things in New England on my blog. Oh yeah, and I love dogs. I always try to include at least one dog in each of my blog posts. I discovered my love of photography a couple of years ago. I know, I got a late start. Now, I photograph anything that seems out of the ordinary, interesting, beautiful and/or unique. And I have noticed how every person, place or thing I photograph has a story behind it or him or her. I don't just photograph things or people or animals. I try to get their background, history or as much information as possible to give the subject more context and meaning. It's interesting how one simple photograph can evoke so much. I am currently using a Nikon D3200 "beginner's camera." Even though there are better cameras on the market, and I will upgrade some time, I love how it functions (usually) and it has served me well. The great thing about my blog is you don't have to be from New England, or even like New England to like my blog (although I've never met anyone who doesn't). All you have to like is to see and read about new or interesting places and things. Hopefully, you'll join me on my many adventures in New England! END_OF_DOCUMENT_TOKEN_TO_BE_REPLACED
This entry was posted on Sunday, January 13th, 2019 at 12:11 pm and tagged with entertainment, family friendly, ice sculptures, juggling, Massachusetts, New England, New Year's Eve, photographs, Photography, skating, Westfield, Whip City, Whip City Witches and posted in Massachusetts, New Year's Eve, photographs, photography, photos, Uncategorized, Westfield. You can follow any responses to this entry through the RSS 2.0 feed.
« Christmas In Salem (Salem, MA)
Ice Invasion (Springfield, MA) »