Parking: There are many metered parking spots along the beach.  They do fill up quickly on “ideal” beach days.

Dog Friendly: Yes, Long Sands Beach has the following dog rules: From April 1 to June 15, leashed dogs are allowed at any time of day; from June 16 to Sept. 15, dogs are only allowed before 8 a.m. and after 6 p.m.

October is not usually the month that comes to mind when one thinks of beach weather. This is not the case at  Long Sands Beach.  The 1.5 mile long beach is a haven for sun seekers and water sport enthusiasts alike.

Maine is known for being hardy folks.  You have to be when the weather can be so extreme.  As my friend told me when she saw my photos, “They will surf in any weather.”  I would add, the more active the water the better.  When I drove by  the beach an hour later, and the weather had intensified there were even more surfers and paddlers in the water than when I had first arrived to photograph the beach and off street parking was almost nonexistent.

As is often the case with our best experiences, I had not planned on visiting Long Sands.  Rather, I happened upon it on my way to Nubble Lighthouse.  When I saw the active water and the activity in the water, I had to pull over to see and photograph the beautiful beach. 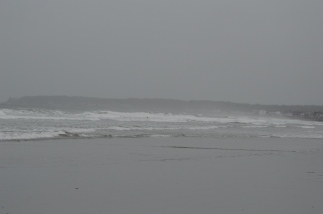 The waves were very active and there were many surfers and paddlers in the water taking advantage of the waves.  It was very cool seeing people with such athleticism and grace in the water. 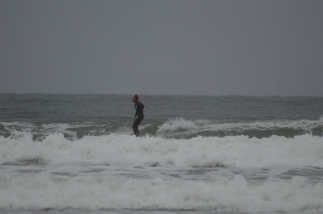 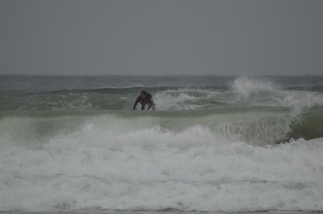 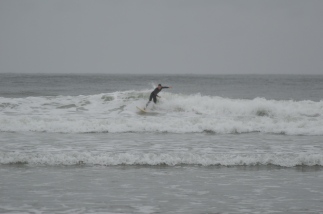 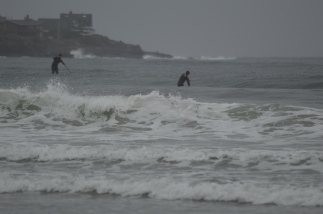 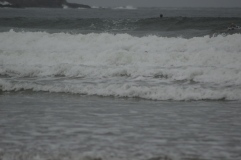 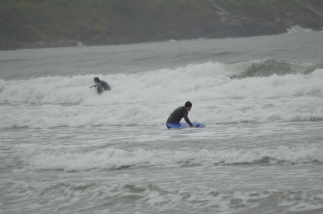 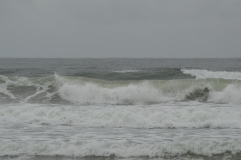 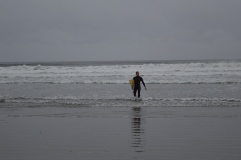 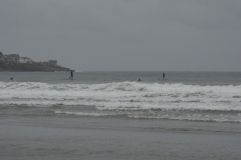 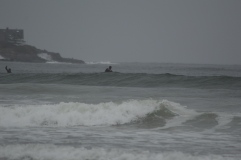 I met these two friendly surfers on the beach.

Long Sands is a dog friendly beach (see the dog rules above).  I met Ollie, a 1 and a half year old Hound mix at the beach. 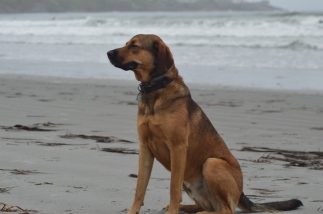 Below is a video of the surfers and stand up paddlers at Long Sands Beach.  As you can see, it was very windy and a little hard to control the camera.

Please Follow Me On Facebookto see photos, videos and other content not included in my blogs.  Thank you!

Similar Places In New England I Have Visited:

Parking: There are about a half dozen parking spots on the side of the road across from the bridge on Lilac Lane (a very busy road so be careful parking and crossing there).  There is also additional parking on side streets and farther along the road on Lilac Lane. 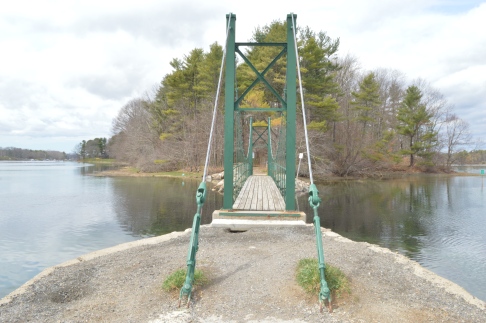 There are many bridges in New England.  But, only few have the name, reputation and appearance of a bridge that could collapse any moment.  The Wiggly Bridge is a mini-suspension bridge built in the 1930’s which crosses over a tidal flow from Barrel Mill Pond to the York River.  If you’re not careful, you may end up in the York River!

Ok, Wiggly Bridge really isn’t that dangerous.  But, it can give you the willies as you walk across it.  Even though it is safe to walk across, the bridge does wiggle and make noises as you traverse it. I made it across the bridge without much trouble and took some photos of the bridge as I made my way across.

The short walk across the bridge leads to Steedman Woods, a tiny peninsula with a mile long loop.  Dogs are allowed on the beach and on Steedman Woods.  The vieews from the island and bridge are stunning.

Wiggly Bridge is also within walking distance, or a short drive from York Harbor.  So, you can take in both of these cool attractions in one day.

Cooper is a 7 year old rescue dog and a resident of Maine.  He also likes the bridge. 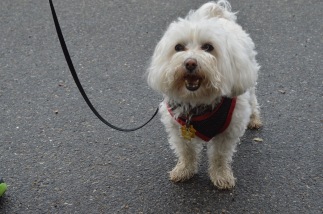 The videos below shows how unstable the bridge seems when you’re walking on it.

Parking: 2 hour off street parking is available, but limited.  There are also a few parking areas near the beach.

A common destination for weddings, dog walkers and beach goers, the Hartley Mason Reservation is a small park with benches, memorials and other works of art.  Perhaps the most popular attraction to this site is the rock with the tiny figures, titled, “Pleasure Ground”.  The sculpture was made by Sumner Winebaum, a York resident, in 2011.  He titled it “Pleasure Ground” because Mason had described the reserve as a “pleasure ground”.  The sculpture is built on a rock nearly 8 feet long, 4 feet wide, and weighs three tons,.  The bronze figures range in height from 10 to 12 inches tall. Winebaum said his goal was to show people enjoying the park such as the two boys wrestling, the person reading and the two women debating (which he has described as his favorite part of the sculpture). 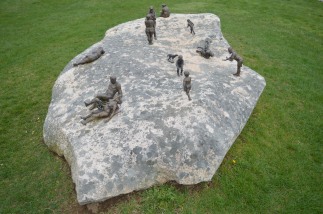 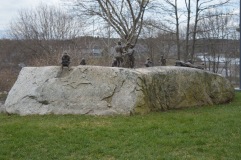 Tiny people doing all the things regular people do.  I wonder what book that tiny figure on the edge of the rock is reading.  Perhaps, “Little Women”.

An easy, clearly marked path leads down to the beach.

Along the trail, there are also benches dedicated to people who have passed.

There is also a memorial dedicated to those lost at sea.  The York Fisherman’s Memorial is

The inscription on the front reads: O HEAR US WHEN WE CRY TO THEE FOR THOSE IN PERIL ON THE SEA.

On the back of the monument, there is an inscription that states: Dedicated to those who lost their lives at sea & for those who work and love the ocean…

The memorial is dedicated to Captain Daniel A. Donnell who died at sea hauling traps.  He was 78 at the time of his death.

The trail is also a great place to take photos of the beach from afar.

From the moment I pulled up to the parking in front of the Hartley Mason Reservation, the view of the water struck me, especially with the weather conditions as they were.  A misty cloud covering filled the afternoon sky reaching all the way to the water making it hard to discern where the water ended and the sky began.  For most people, this is hardly ideal beach weather.  But, I, and my sensitive Irish screen, have always preferred this weather to the scorching unabated sunlight. 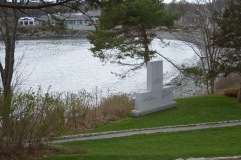 The trail eventually leads to the beach (there are also side trails, or if you’re feeling spry you can just walk down the rocky or grassy areas off the trail).  Due to time constraints, we just stopped at the beach head and took photos from there.  There were some modest waves and some pretty views. The beach does have a lot of rocky areas that wouldn’t be very comfortable to walk around in on sandals.  Wear comfortable footwear.

Although the beach area is much larger and may have more accommodations (I will visit again later to capture the beach in its entirety), the section I visited had very little room for lying out.  There really was just rock and a concrete slab to stand, sit or lie on.  The parking is also pretty sparse at this section of the beach.  There are only a few parking spots and some are designated for certain people.  There is also an outdoor pool near the beach.

The beach was very busy with not only human visitors but cute furry ones as well (I suppose some of the human visitors were furry as well but that is neither here nor there).

Kipper is a 9 year old German Shepherd.  He got to play in the water and he loves to play catch.  And his mom’s boots were pretty cool.

Gracie is a 7 and a half year old Boxer with a very broad smile. 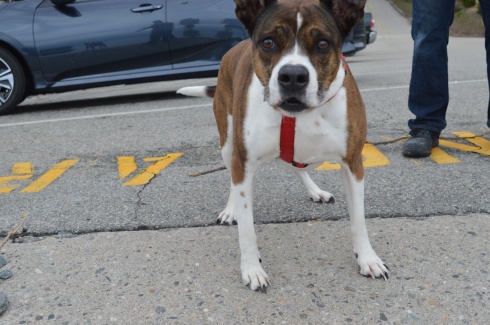 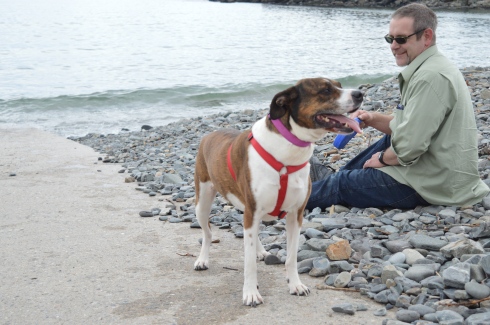 Below is a video of the waves at York Beach Saturday.