Hours: Open to the public 24 hours a day until March 30

Summary: nearly 2,000 pink flamingos have been set up at the Boston Seaport Common until March 30

Over 1,900 flamingos (some of them a little tipsy) have been planted at the Boston Seaport as a way to brighten up the area and make people smile. This fly by night installation, which is the work of Massachusetts-based developer WS Development, won’t last long though. The birds are expected to stay at their location at the Seaport Common through Tuesday, March 30. Then, they are migrating to the Street Chestnut Hill (MA) and Market Street Lynfield (MA) from April 1-12.

Contrary to popular opinion, these flamingos are not new to the area. In fact, these flamingos have a long history in MA. Don Featherstone designed the first flamingos for Leominster based Union Products in 1957.

They won’t be here for long! So make sure to flock to the Seaport before they fly away!

Hours: Open daily, 24 hours until April 1.  It’s been viewed during the evening or overcast days 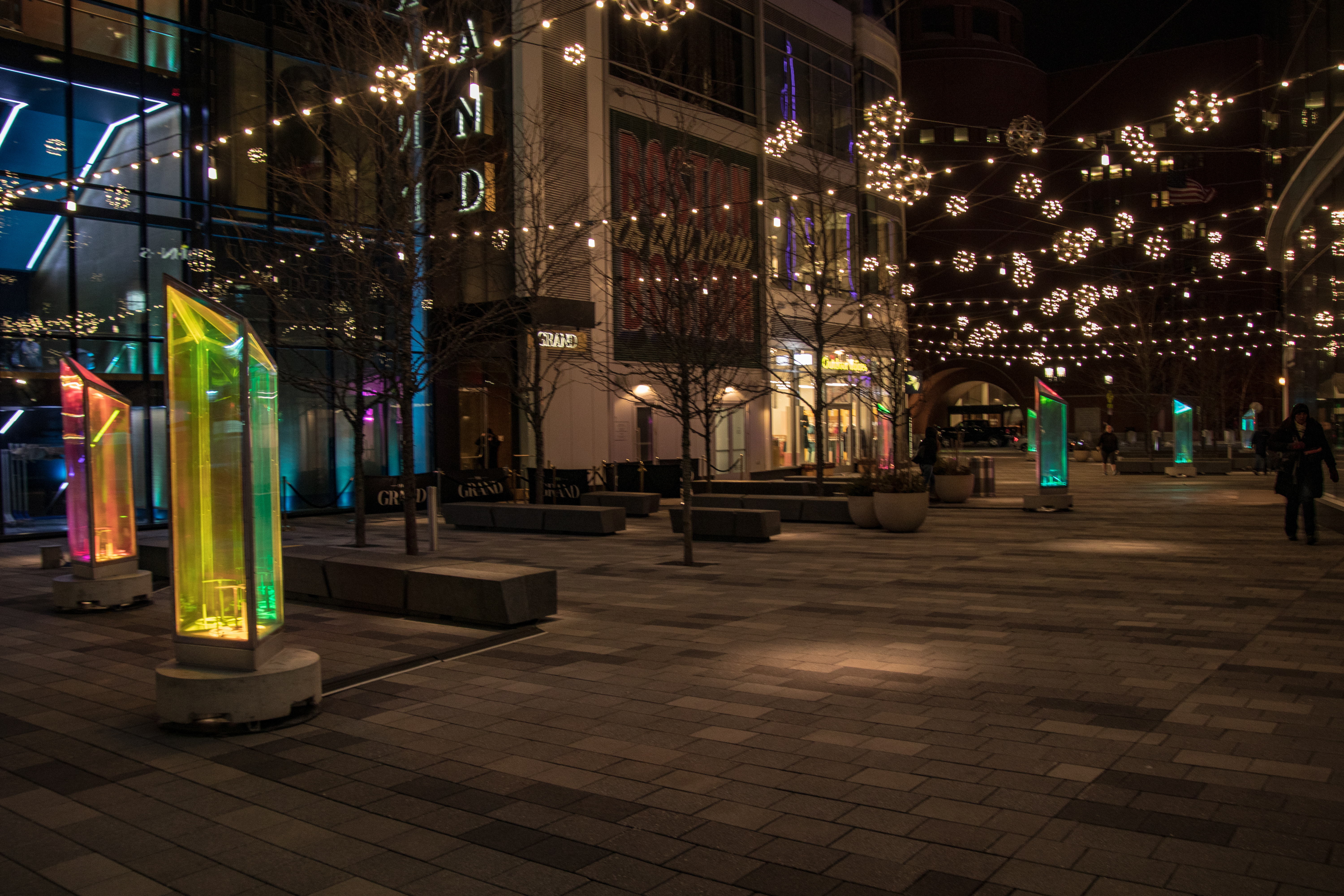 Don’t be surprised if you see lights and hear unusual sounds in the Seaport area.  It’s not the mothership coming for us.  It’s just another light display on Seaport Blvd.

The light display, appropriately named “Prismatica”, will be on display until April 1.  Although the lighted panels will be on display all day, it is best to view them during the evening hours, particularly after dusk for obvious reasons.

The 25 panels, which were made by RAW Design in collaboration with ATOMIC3, are laminated with a dichronic film that transmits and reflects every color in the visible spectrum.  The lights in the panels change depending on the position of the light source and the observer.

The colors of the pillars can be changed by the visitors. However, the lighted pillars in these photos were turned because of the high winds the evening I took these photographs.  In fact, it was the precursor to one of our many New England snow storms.  And, as they turned, their colors also changed.

But, that’s not all that changes.

The pillars also play sounds.  When you turn the pillars they emit soft sounds in addition to changing their colors.

The colors of the panels do not have to be turned or manipulated to change.  As you can see from the photos below, the panels change colors on their own.

As I mentioned in my previous post, I am going to add more of the settings I used and my advice about shooting displays and places like this.  Although I do recommend using a tripod for shoots like this (evening shoots with low light) and I did bring mine with me, I did not have to use my tripod because the external light sources at this venue provided enough light for me to shoot without having to use the tripod.  Like many other photographers, I prefer to avoid using a tripod whenever possible because it is bulky and slows me down.  I was also able to bring out some of the light by bumping up my ISO a bit and using my settings in Adobe Lightroom.  This brings me to my next point about shooting late at night or in any lighting situation actually which I will outline below.

One thing I have noticed, for whatever it is worth, that it can be tempting and very easy to overcompensate for low light environments by overcompensating with the exposure, contrast, saturation and other settings.  I see it often.  I am sure you do as well.  While it may vary on the situation, I try to emulate the images as I saw them to the best of my ability.  I could have very easily upped the saturation and clarity (and the urge is very tempting to do so).  But I wanted to represent the display as closely as to what I saw and what it really looked like at least on that night.  That is a key point, too.  The same place, display or person can and often will look different on different days or even at different times of the same day.  Before I go on and on, which I could easily do, I’ll spare you all of my thoughts about this point.  There will be many other shoots to delve into the settings in Adobe or Photoshop.

To wrap up my details of this shoot, I used a 3.5 or 4.0 aperture setting for most of these shots with a variety of shutter speeds from 1/10 to 1/100 shutter speed (I usually shoot with an aperture priority setting so the camera chose that speed) and an ISO of 320 and I probably could have even gone lower.

Similar Displays I Have Visited: