The first part of the Greenway in this post is at Chinatown near the Lincoln Street Triangle.

This part of the Greenway has other attractions such as the human-made waterfall and stream and a sitting area where people can spend time together, play games or just play in the water.  Ahh, to  be young again.

The next work of art is a mural that is painted on a building that sits on Atlantic Ave.  The building this mural is changed annually.  Each year, usually in the spring, a new mural is painted by a different artist.

The 70’x76′ mural on the building at Dewey Square is called Carving Out Fresh Options.  It was painted by Shara Hughes.

I was fortunate enough to see the artist working on her mural while I was walking to work in May.

And, of course, the finished product.  During the summer, people lay out on towels or on chairs on the lawn in front of the Greenway which can make photographing it without obstructions challenging. 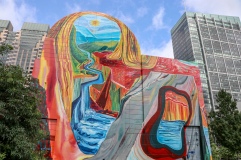 There also are historical markers on the Greenway.  Two remnants of the old raised Central Artery highway that once carried traffic over this area.

One of the beams from the original Central Artery is located the building with the mural above.  It is located on Congress and Purchase Streets which is easy to remember by the axiom “people purchase congress.”  Sad but true.  It is easy to miss as I have probably walked past it hundreds of times but never gave it a second thought until I wrote this post.

There is another beam from the Central Artery located on Surface Road located on the edge of Faneuil Hall.

Rumor has it there may be another one on Clinton Street.  But, I couldn’t find it.

Located across from the first steel beam from the Central Artery is Balancing Act by Aakash Nihalani.

Balancing Act I represents a tower of six cubes which appear to fall over as the middle one is pulled out of alignment.

Balancing Act II  shows blocks which are precariously piled up and appear to be ready to collapse.  I think we all can related to this apt description of our everyday lives.

The works almost seem unreal.  It’s as though they were a mirage or photo shopped into the photo (I swear I didn’t).  Akash just knows how to use colors and  materials.

Way Of The Woods by Daniel Ibanez and Margen-Lab is a tribute to the North American landscapes.  The nine logs are said to transform into contemporary interpretations of these raw natural materials. 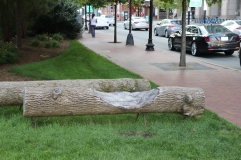 The next work of art is an illuminated tunnel-like structure made by Luftwerk called Transition. 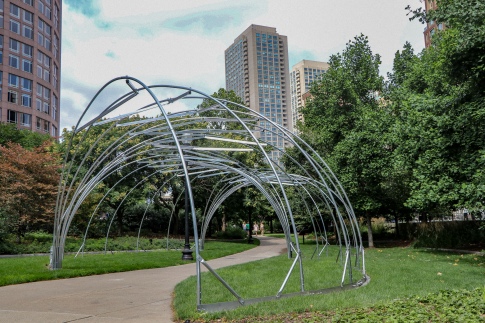 It looks a lot more impressive during the evening hours.

Harbor Fog by Ross MIller is an interactive sculpture.  As a person or body comes closer to it it makes noises and generates fog.

The next work of art located on the Greenway is called GLOW.  GLOW is a collection of old neon signs that once illuminated the Massachusetts skies.  The signs are the collection of Lynn and Dave Waller.  Each sign is erected on a concrete block with the name of the city or town it once stood.  The signs are illuminated all day and night, during park hours.  But, as you can see by the photos, they look much prettier during the evening.

The Siesta Motel on Route 1 North, Saugus, MA, circa 1950 sign looks cool enough during the day, particularly during an overcast day.

But, it looks much nicer during the evening.

Unfortunately, the lights for the Fontaine’s Restaurant, VFE Parkway, West Roxbury, MA, circa 1952  (I actually ate breakfast there once…after the neon sign was installed wise acres) were not working when I went to visit it during the day and evening. 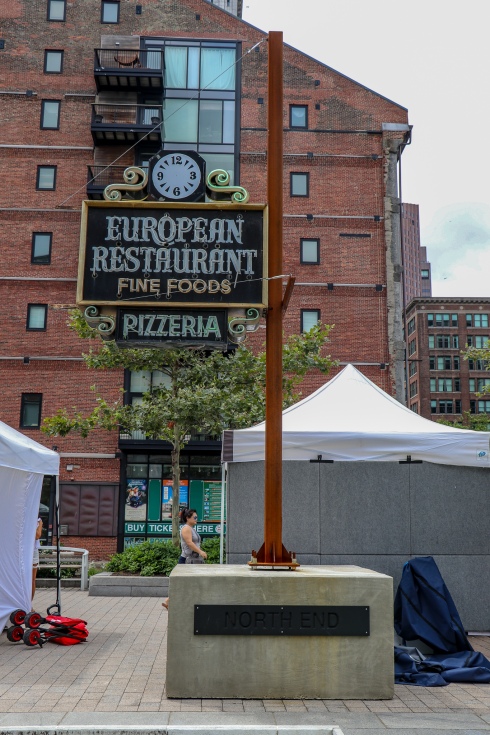 The remaining signs were all taken during the evening hours to highlight their colorful artwork. 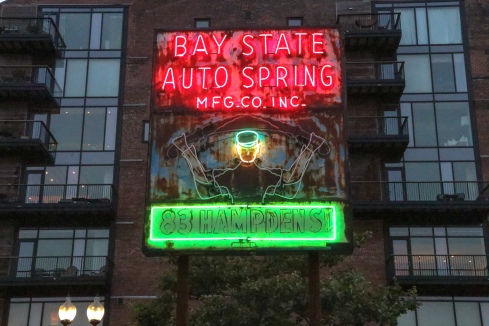 The neon sign for Cycle Center, Natick, MA, 1956 is one of my favorites.  It lights up and changes colors as the rider pedals.

There is also a memorial to the victims of the Armenian genocide as well as the Armenian immigrants and immigrants of all backgrounds that came to the United States and settled in the Boston area.

The Armenian Heritage Park has a maze for people to walk that leads a fountain at the center of the circular path.  Words like science and commerce have been etched in the paths. A plaque near a bench at the park states the park is dedicated to those suffered to preserve the Armenian heritage. 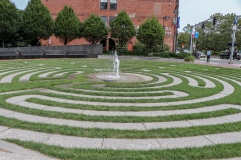 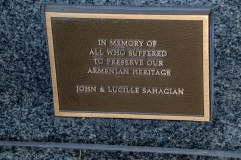 The Abstract Sculpture honors the victims of the Armenian genocide and victims of all genocides as well as our open shores.

The inscription on the sculpture reads:

“Boston and the Commonwealth of Massachusetts have offered hope and refuge for immigrants seeking to begin new lives. The park is a gift to the people of the Commonwealth and the City of Boston from the Armenian-American community of Massachusetts. This sculpture is offered in honor of the one and one half million victims of the Armenian Genocide of 1915-1923. May it stand in remembrance of all genocides that have followed, and celebrate the diversity of the communities that have re-formed in the safety of these shores.”

There is also a statue dedicated to Tony DeMarco.  Who is Tony DeMarco?  Don’t say that too close to the North End of Boston.

Tony DeMarco is a former World Welterweight Champion who grew up in the North End section of Boston, MA.  Despite winning the Welterweight title, the Sicilian born boxer was best known for his slug fests with Carmen Basilio.  He would lose both fights but fought valiantly in both matches.

Thank you all for stopping by and reading.  In my upcoming third and final installment of the Rose Fitzgerald Kennedy Greenway, I will be focusing on some of the entertainment on the Greenway!

Sometimes it seems like your phone’s camera takes better photos then your camera, especially during the evening when you don’t have your tripod.  Click on the link below to access my Facebook page and view more night time photos and videos from the Greenway.  And give the page a “like” while you’re at it!

Hi I'm Wayne. Welcome to my blog. I am a true New Englander through and through. I love everything about New England. I especially love discovering new places in New England and sharing my experiences with everyone. I tend to focus on the more unique and lesser known places and things in New England on my blog. Oh yeah, and I love dogs. I always try to include at least one dog in each of my blog posts. I discovered my love of photography a couple of years ago. I know, I got a late start. Now, I photograph anything that seems out of the ordinary, interesting, beautiful and/or unique. And I have noticed how every person, place or thing I photograph has a story behind it or him or her. I don't just photograph things or people or animals. I try to get their background, history or as much information as possible to give the subject more context and meaning. It's interesting how one simple photograph can evoke so much. I am currently using a Nikon D3200 "beginner's camera." Even though there are better cameras on the market, and I will upgrade some time, I love how it functions (usually) and it has served me well. The great thing about my blog is you don't have to be from New England, or even like New England to like my blog (although I've never met anyone who doesn't). All you have to like is to see and read about new or interesting places and things. Hopefully, you'll join me on my many adventures in New England! END_OF_DOCUMENT_TOKEN_TO_BE_REPLACED
This entry was posted on Saturday, September 1st, 2018 at 1:19 am and tagged with art, Boston, dog, Massachusetts, mural, New England, photographs, Photography, photos, Rose Fitzgerald Kennedy Greenway, statues and posted in art, Boston, dog, historical, history, Massachusetts, mural, New England, photographs, photography, photos, Uncategorized. You can follow any responses to this entry through the RSS 2.0 feed.
« Rose Fitzgerald Kennedy Greenway Part I (Boston, MA)
Rose Kennedy Greenway Part III (Boston, MA) »