Hours: The beach is accessible daily from dawn until dusk

Parking: Hampton Beach offers a variety of parking options.  If you’re lucky enough to get a parking spot in the main parking area it is $2 an hour during the summer.  There are also additional lots that range from 5 to 20 dollars for the day depending on when you arrive.  See link for additional parking info: Parking Info

Dog Friendly: Yes but dogs are not allowed on the beach during the summer

Sand sculptors from all over North America showed off their talents during a two day sand sculpting festival at Hampton Beach, New Hampshire.  If you missed the event but you want to see the works of art in person, don’t fret. The sand sculptures should be up for a while, or at least until Mother Nature says differently.  They will be lit up at night until June 27.

In the past, I have spent the second day of the festival at the beach watching and photographing the sculptors at work.  However, this was not possible this year.  I thought I would head off to the park early Sunday instead.  The beach was already packed when I arrived at 7:30 (don’t people sleep in anymore?).  But, I was able to get shots of the finished products and a few of the visitors at the beach.

So, with further delay, the winners were…drum roll please…

The winners, which were selected Saturday, June 22, and runner-ups are listed below. 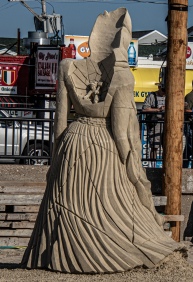 Karen Fralich of Toronto, Canada, snagged second place with “Samurai.”  Karen said she saw a photo of a female samurai while she was looking through old photos with her mother and that was the impetus for this work.  You may notice needle like objects protruding from the sculpture below and in some of the other sand sculptures.  These are meant to keep birds from perching on the sand sculptures. 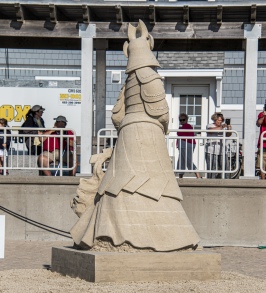 Third place and also the winner of the “People’s Choice” (in which the visitors at the festival were allowed to vote for their favorite sculpture) and the “Sculptor’s Choice” awards went to Abe Waterman of Prince Edward Island for “Outside In.”   He said his sculpture was about how we perceive others and how others perceive us. 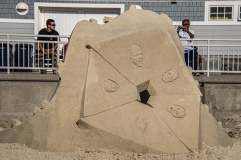 “Life Goes On” by David Andrews  of Wisconsin placed fourth in the competition.  Like many of the artists at the competition, this was not his first rodeo at Hampton Beach.  Andrews participated in last year’s competition as well.  David said his sculpture was a tree that grew in the remains of a wreckage. 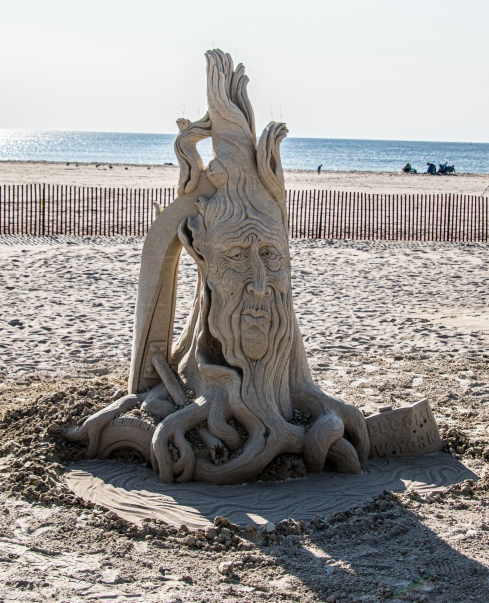 Fifth place went to another Hampton sand sculptor regular, Greg Grady of New Hampshire for “Ask. Seek. Knock.”  Greg said his sculpture was about a person seeking answers and reaching out for a spirit and seeking answers to his problems.

The runner ups were still impressive.  It almost seems unfair to have to pick one particular sculpture for first place since they all have so much beauty and it is such a subjective process.

“Connected” by Chris Guinto of Key West, Florida, is about a bird flying away from tree it is connected to.

“Plastic” by Carl D Jara of Cleveland, Ohio, explained that he had been thinking of plastic a lot before he planned this sculpture but his thoughts about the idea were negative.  He decided to think more positively and this sculpture was the result.

Marc Lepire from Quebec, Canada, who works not only with sand but also carves ice and wood, sculpted “No Fear.”  He said his “dark side” came out while was constructing his piece.

Dan Belcher of Saint Louis, Missouri, sculpted “Hemisphere.”  He said that by having a happy face and  a sad face in the sculpture, the sculpture shows how we can be a mixture of good and bad.  The sculpture depicts our contrasts. 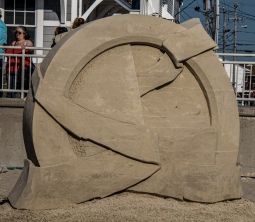 Justin Gordon of Massachusetts created “Hulk 3-D.”  According to Justin, the sculpture shows a 3-d like image.  By making one hand bigger than the other, Justin tried to show motion in the sculpture.  He also said everyone seems to be interested in super hero movies and we’re all looking for a super hero these days.  So the sculpture seemed appropriate. 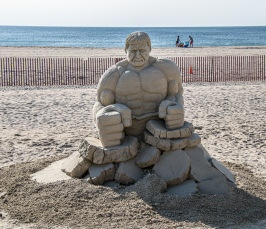 There were also a few cute visitors to view the sand sculptures.

Missy, who will turn 9 in September, is a Golden/Chow mix.

Cody, a 7 year old Maltese, got around in style at the beach.

April 1 through April 30 – Pay and Display parking is in effect. $1.00 per hour between 8AM – Midnight. Midnight – 8AM Parking is free. Effective 2013 – Pay and Display. You must now return to your vehicle and display the receipt from the pay station in your dashboard. If you do not have a receipt displayed you will be fined.

Effective May 1st – $2 per hour public parking. Pay at Pay Station and Must display receipt visibly on dashboard.

Handicap Parking – Handicap parking is available in any legal metered parking spot providing you have a Handicap Plate or a Hanging Handicap Tag hanging, or visible, in your front window. 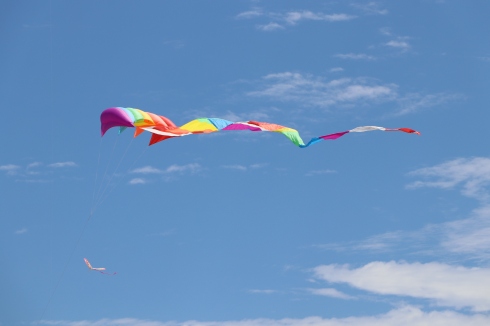 If you were in the Hampton, New Hampshire area last weekend, those weren’t space ships or dragons you thought you saw in the sky. No, it was the 9th annual Kites Against Cancer charity event at Hampton Beach, NH.  People from all over New England stopped by the beach to fly their kites and help a good cause.

Kites were provided or you could bring your own kite.  There were also kite decorating stations for you to personalize your own kite.  One of the participants, Miss Hampton Beach 2016 (Brooke Riley of Lowell, MA), decorated her kite with the names of relatives who had cancer at one point of their lives. 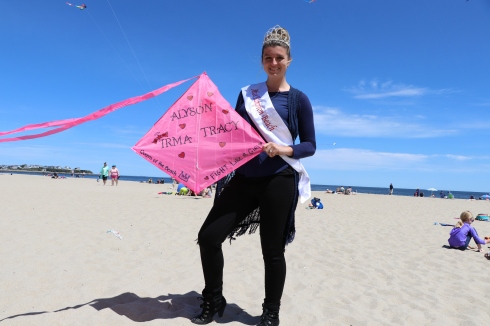 Carrie Shaw, advancement officer at Exeter Hospital and the organizer of the event, said they expected 1,000 visitors for the event. Based on the crowds I saw there I am sure there were more than that throughout the course of the day. 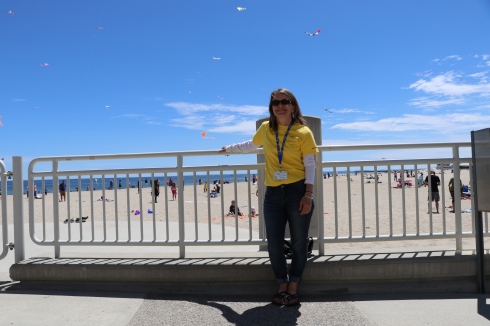 Carrie was inspired by her sister, Anne-Marie Viviano, who passed away from cancer.  In 2002, Anne-Marie had created a charity called Beyond The Rainbow which was designed to help patients pay their bills and meet other financial obligations.  After her sister passed, Carried dedicated herself to continuing this charitable endeavor.  The Kites Against Cancer event is one of the events that helps raise funds for the Beyond The Rainbow charity.

As I watched the sun seekers flying their kites, it was heart warming to see people of all backgrounds and walks of life enjoying themselves. 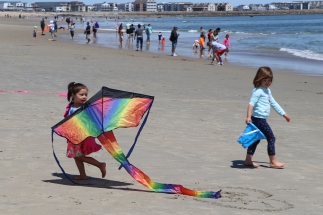 But some people seemed more interested in the sand and water. 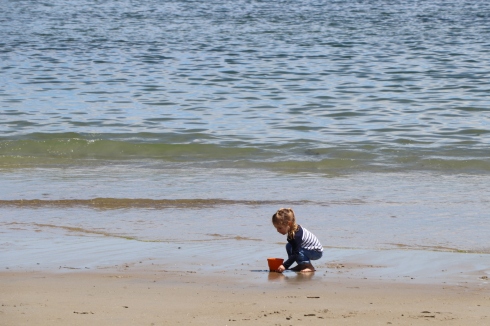 The types of kites being flown were just as diverse as the people flying them. 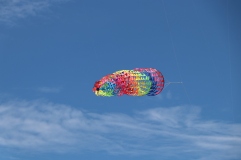 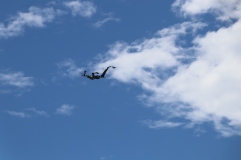 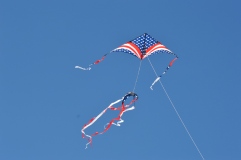 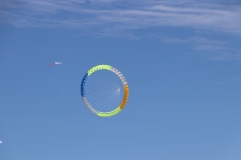 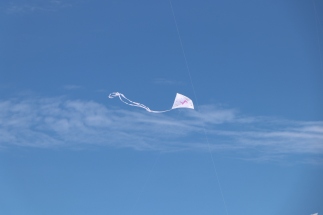 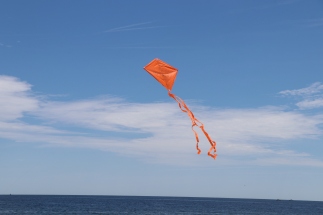 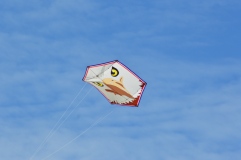 Carrie has made Kites Against Cancer an annual event that has grown bigger and bigger each year.  This year’s event included face painting, a balloon shaping artist, a card which people could sign in memory of those who have been lost to or survived cancer as well as music and speeches by special guests.  There were also an estimated 50 to 60 volunteers helping to make sure the event off smoothly, according to Carrie.

Kites Against Cancer is also a dog friendly event. 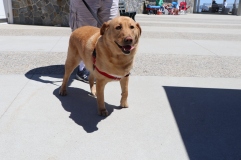 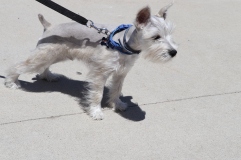 Noah is an 11 year old Pomeranian.  He was wearing his special sweater for the event. 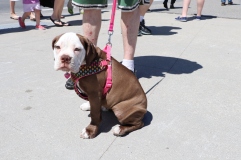 If you missed this year’s event, you can attend next year but you want to support this cause or if you want learn more about the Beyond The Rainbow Fund, click on the link below: