It’s been 18 years since the attacks on the World Trade Center, yet the pain is still real and the scars are still raw for many.  Built in 2002, the 911 Memorial at the Boston Garden gives people a place to reflect, leave flowers and other mementos and let us all remember.

The memorial includes names of the victims with ties to Massachusetts or the New England area.   As I scanned the scanned the 250 names , one name stood out. 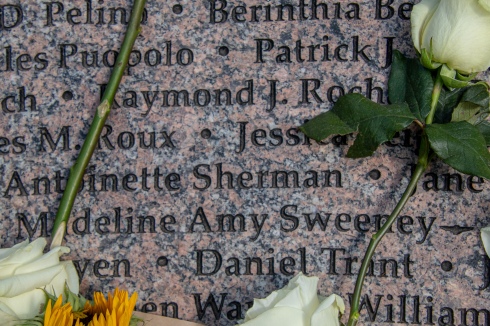 Madeline Amy Stewart (more commonly known as Amy Stewart) is considered the first person to give a description of the hijackers to the air traffic controllers.  Amy, who was originally from Long Island and settled in Acton, MA, after her marriage, was a flight attendant on American Airlines Flight 11.  Before her plane crashed into the North Tower, Amy relayed important information about the hijackers and the path of the plane she was on.  Like many other people who died that day she was not supposed to work on that flight.  She had picked up an extra shift for a colleague who had fallen ill.  There are a lot of stories like that in the list of names etched in the memorial.

Each year, the Madeline Amy Sweeney Award For Civilian Bravery  is awarded to one person from a  who has displayed exceptional bravery, without regard for personal safety, in an effort to save the lives of another or others in actual imminent danger.

Annually, on the anniversary of the attacks, a wreath is placed at the memorial.  Many people also leave mementos and reminders such as a photo of the Twin Towers and photos of some of the victims of the attack.

Another thing I noticed on the memorial is a few of the names had FDNY after their names (indicating they worked for the Fire Department of New York) and, as I researched the memorial and names on the memorials, just how many people had ties to the New England area.  It’s not unusual to meet someone in one of the New England states who has a relative who resides in New York, or who may have been born there or lived there at some point.  We’re very much connected to New York and other parts of the areas affected by the attacks and the connection is very much evident when you visit the memorial.

Hi I'm Wayne. Welcome to my blog. I am a true New Englander through and through. I love everything about New England. I especially love discovering new places in New England and sharing my experiences with everyone. I tend to focus on the more unique and lesser known places and things in New England on my blog. Oh yeah, and I love dogs. I always try to include at least one dog in each of my blog posts. I discovered my love of photography a couple of years ago. I know, I got a late start. Now, I photograph anything that seems out of the ordinary, interesting, beautiful and/or unique. And I have noticed how every person, place or thing I photograph has a story behind it or him or her. I don't just photograph things or people or animals. I try to get their background, history or as much information as possible to give the subject more context and meaning. It's interesting how one simple photograph can evoke so much. I am currently using a Nikon D3200 "beginner's camera." Even though there are better cameras on the market, and I will upgrade some time, I love how it functions (usually) and it has served me well. The great thing about my blog is you don't have to be from New England, or even like New England to like my blog (although I've never met anyone who doesn't). All you have to like is to see and read about new or interesting places and things. Hopefully, you'll join me on my many adventures in New England! END_OF_DOCUMENT_TOKEN_TO_BE_REPLACED
This entry was posted on Wednesday, September 11th, 2019 at 6:45 pm and tagged with 911, Boston, Massachusetts, New England, Photography, photos and posted in 911, Boston, Massachusetts, New England, photographs, photography, photos, Uncategorized. You can follow any responses to this entry through the RSS 2.0 feed.
« Toytopia (Springfield Museums, Springfield, MA)
2019 Vintage Lawn Party (Salem, MA) »