The Statues of Salem (Salem, MA)

Salem, MA and the people of Salem are known for more than just the well publicized witch hysteria.  While the city remembers this somber time with memorials, they also have other monuments, statues and other decorations, particularly during the Halloween season.

This is probably the most recognized statue in Salem.  It is the statue of Roger Conant, the founder of Salem.  Because of the dark, foreboding image of the statue and the fact that it is located directly in front of the Salem Witch Museum, it is often at first glance considered a monument in tribute to the victims of the witch hysteria.  That was my thoughts when I first saw it as a younger person.   As an fyi, it is very hard to take a photo of the statue without throngs of crowds nearby doing the same thing, often times ruining your photo.  I had to arrive very early Halloween day to get this photo without a lot of people or car traffic.  It is a very popular stop for tourists. 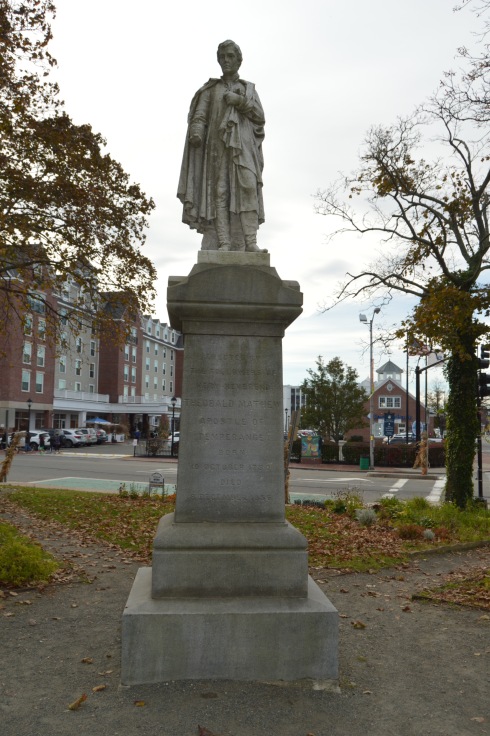 Speaking of Hawthorne, just farther down the road on, you guessed it, Hawthorne Boulevard is the Nathaniel Hawthorne statue.

One of the things you have to love about Salem is they don’t try to sweep the past under the rug and they try to educate others about tolerance.  This sign for the Witches Education League is an example of this. 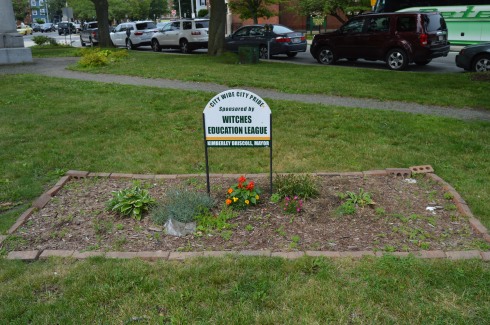 There is also a memorial to the The Blue Star Memorial Program which is dedicated to all of the men and women who serve in the United States armed services. 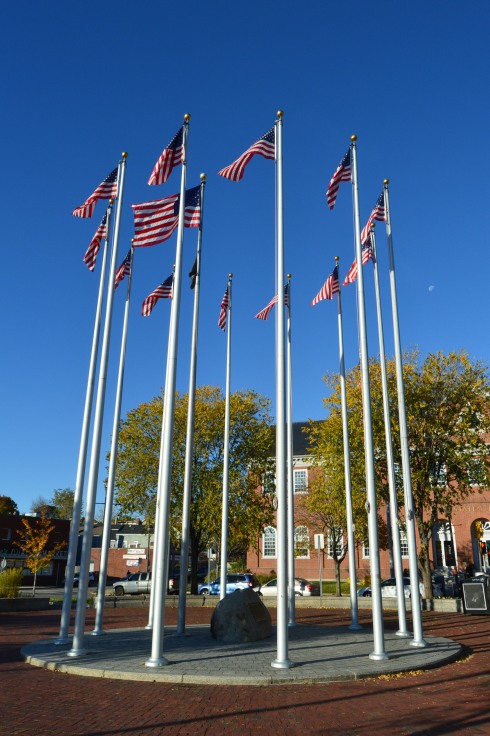 This memorial is dedicated to the Boys of the Immaculate Conception who served during World War I.

This monument, located in Salem Common, is a tribute to those who died during World War II 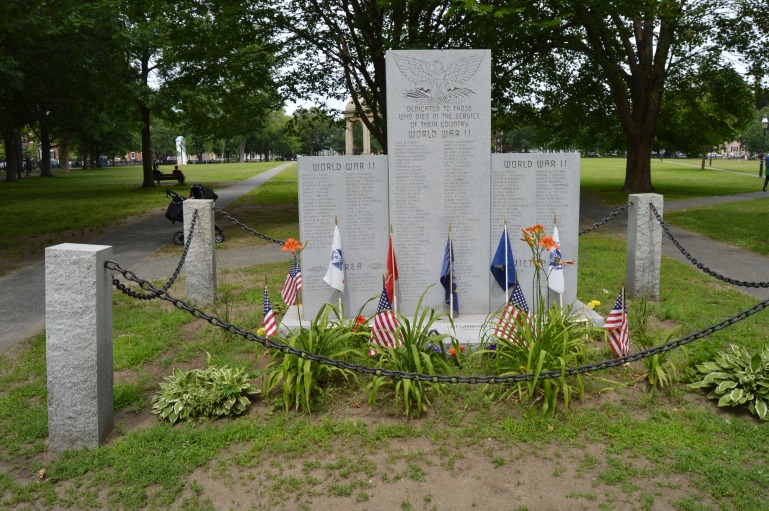 The Salem Fire Department has two memorials at their Ladder 2 station.

One memorial is a memorial to the victims of September 11.The metal in the middle of the monument is from the rubble at Ground Zero.  The two concrete beams in the background represent the North and South towers at the World Trade Center.

There are two ceramic angels in a cup placed on the memorial.  People leave pennies in honor of the victims. 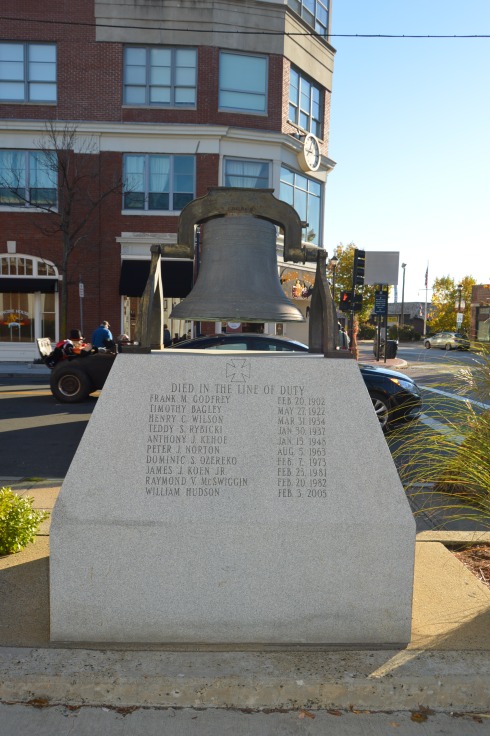 Closer to the heart of the city, there is also a monument with a quote from Eli Wiesel. 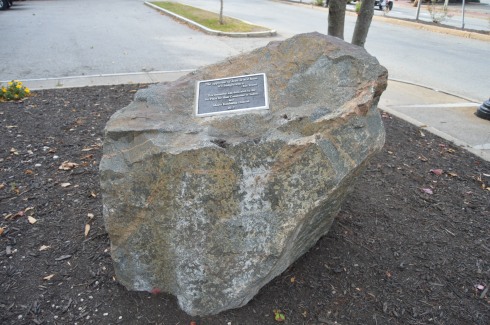 During the Halloween festivities, the original water pump was displayed in the main drag of the walk way on Essex Street.  This is the original pump the people of salem had to use before they had indoor plumbing and other amenities we take for granted.

This placard reminds us that even ghosts like bacon.

I also met some very cute dogs during my travels. 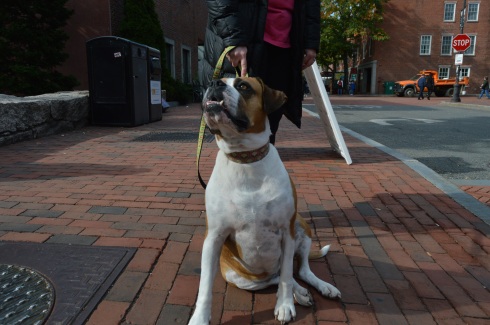 And Harley.  Harley didn’t like my camera.  But, he felt safe when he was with his dad.

and this cute fella whose name I didn’t get. 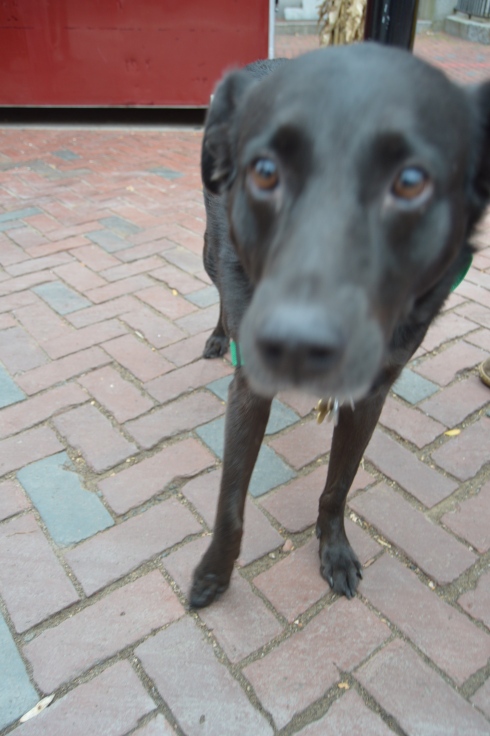 As these monuments, statues, memorials, signs and dogs have shown, there is more to Salem than just the Halloween festivities.  My next blog will deal with the impressive architecture of the homes, museums and other buildings of the Salem area from my recent visits.

Hi I'm Wayne. Welcome to my blog. I am a true New Englander through and through. I love everything about New England. I especially love discovering new places in New England and sharing my experiences with everyone. I tend to focus on the more unique and lesser known places and things in New England on my blog. Oh yeah, and I love dogs. I always try to include at least one dog in each of my blog posts. I discovered my love of photography a couple of years ago. I know, I got a late start. Now, I photograph anything that seems out of the ordinary, interesting, beautiful and/or unique. And I have noticed how every person, place or thing I photograph has a story behind it or him or her. I don't just photograph things or people or animals. I try to get their background, history or as much information as possible to give the subject more context and meaning. It's interesting how one simple photograph can evoke so much. I am currently using a Nikon D3200 "beginner's camera." Even though there are better cameras on the market, and I will upgrade some time, I love how it functions (usually) and it has served me well. The great thing about my blog is you don't have to be from New England, or even like New England to like my blog (although I've never met anyone who doesn't). All you have to like is to see and read about new or interesting places and things. Hopefully, you'll join me on my many adventures in New England! END_OF_DOCUMENT_TOKEN_TO_BE_REPLACED
This entry was posted on Monday, November 2nd, 2015 at 4:16 am and tagged with dogs, Historical, history, Massachusetts, memorials, monuments, New England, Photography, photos, Salem, statues and posted in history, histrorical, massachusetts, memorials, monuments, New England, photography, photos, Salem, statues. You can follow any responses to this entry through the RSS 2.0 feed.
« Happy Halloween (Salem, MA)
Historic Homes of Salem (Salem, MA) »

4 responses to “The Statues of Salem (Salem, MA)”