Parking: Parking for about 50 cars is available in the lot next to Brunelle’s

Handicapped Accessible: Yes, although some areas may be inaccessible

New England’s bizarre weather has created yet another peculiar attracted that has peaked the interest of countless visitors; ice floes.

But, these icy chunks of frozen water are no ordinary ice floes.  These ice floes and ice chunks are so large some people have been seen lying on them, taking selfies on them and walking on them, cautiously (more on that later).

Although most of the ice floes and chunks of ice have surely melted with our recent warming trend, it is likely this may happen again this season or again next winter, although this was a fairly unusual event for this area.

The chunks of ice were stable in most areas.  But, not all areas.  Let’s just say I may know from experience.  So, do be careful if you do visit this icy attraction.

The slabs, caused by frigid temperatures have attracted large crowds.

Despite our downright balmy weather conditions this weekend, it has been a particularly cold winter.  But, hey that’s New England for you.

The ice chunks were often found bunched together, almost in a tectonic fashion. 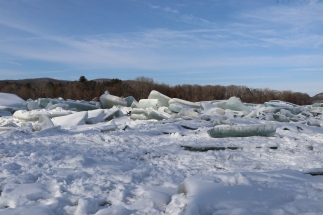 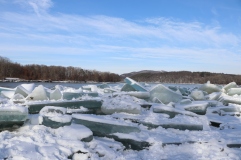 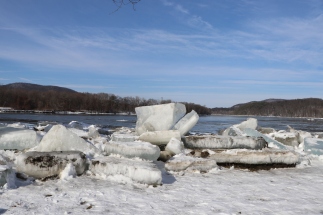 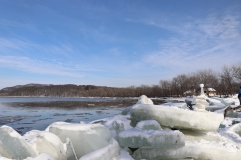 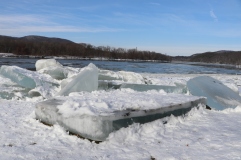 Another interesting aspect of the chunks of ice are the white and blueish colorful hues from the light shining through the ice.  The colors reminded me of crystals and diamonds. 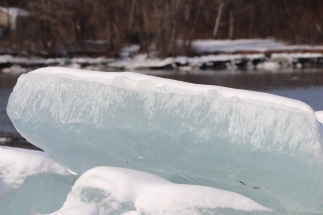 A few of the visitors decided to make good use of the snow and made this snowman.  But, I’m not sure what the sticks in the head are all about.  it’s a little disturbing, actually.

The ice floes are also popular with dogs.

Princess is a 3 year old Maltese. 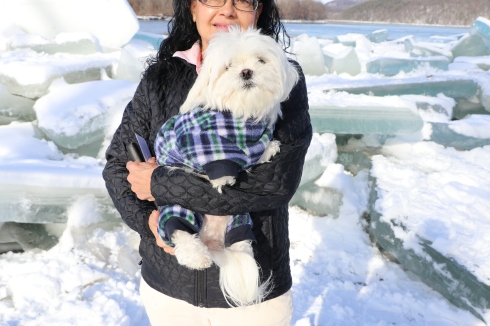 Winston, a 5 year old English Cream Golden Retriever, barked out his approval of the floes. 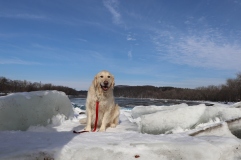 Below is a video of the ice floes floating and traveling down the Connecticut River.

Parking: There are several parking gaarages in the area or you can try street parking (good luck).  If you don’t feel like driving, the Government Center Train Stop on the Green Line is directly across from Boston Winter.

In an effort to make the city even more festive, Boston has installed a temporary skating rink and holiday attraction.  The 11,000 square foot ice skating path (it’s not really a rink but more of a circular ice path) is open to all skaters of any skill level.

The opening of Boston winter, the attraction nott the actual season, was delayed from December 2nd to December 7th because it was not cold enough to sustain the temperatures needed to keep the rink frozen.  Sadly, that is not a problem now.

People of all ages, backgrounds and ability took to the ice and reveled in the ice and atmosphere.  It’s a great event for couples and it is very family friendly.  I’m always surprised to some degree how well behaved and (usually) considerate people are at these events.  The walk ways and standing areas – there is no seating available and I’m sure that is by design – is narrow and congested in some areas but people are pretty courteous. 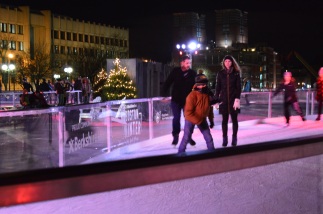 A dj keeps the event fun and loose.  He announced different people’s birthdays and tried to get the crowd excited.  He reminded me of the dj’s they used to have at roller skating rinks.

In addition to the skating rink, there are vendors selling a variety of goods from belts and clothing to novelty items. 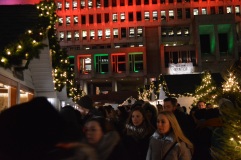 The lighting and decor of the event is both tasteful yet festive.  Very often when people and businesses decorate for the holidays they overdo it.  I don’t think this was the case at Boston Winter (ok the tree with the spirals that light up may have been a bit much but I liked it!).

Below is a video of some of the skaters at Boston Winter.

Hours 8 a.m. – 8 p..m. (during the regular season, open without staff during the off season)

Cost: Free but it may cost to put a boat or other watercraft in the lake

“Massabesic” (pronounced Mass-A-Bee-Sick) is a Native American word for “place of much water” or “near the great brook”.  True to its translation, Massabesic Lake Watershed is definitely a place where you will find much water, albeit frozen.  Manchester Airport is nearby so it is not uncommon to see a plane fly by as is evident in one of the photos in the slideshow below.

Normally, I would consider visiting a lake, pond or any body of water during the winter something of a waste.  Little did I realize though, lakes can be as much fun in the winter as they are during the summer.

A sign on the trail in Massabesic Lake warns you to stay on the trail.  This is partly because the houses are so close to the trail.  Also, you have to cross busy roadways at some points to continue on the trail.

There were people ice fishing (the orange flags on the poles in the water stick up when they get a bite).   Since Lake Massabesic is used as a watershed, people are not allowed to swim or put their bodies in the water.  But, you can fish, sail and canoe on the lake. 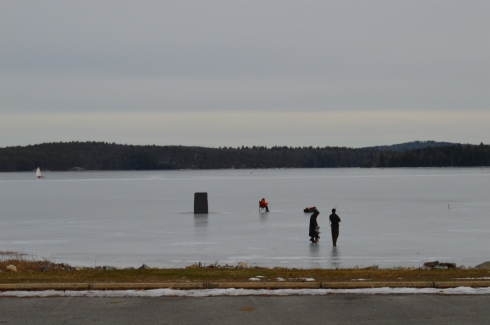 There were people sailing on their ice boats.  You can hear the gentleman talking to me in the video below.  Are there any friendlier people on this planet than the people of New Hampshire?

or relaxing in their favorite chair 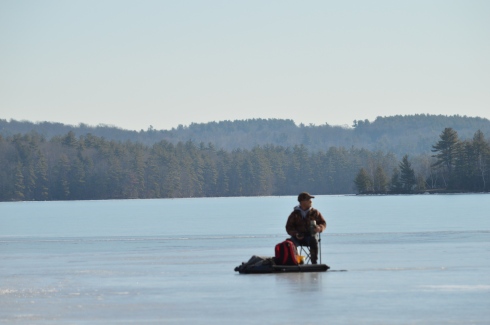 The Massabesic Lake is home to a trail that leads to Portsmouth, NH as part of the Rockingham Recreational Trail.  As much as I love Portsmouth, I wasn’t up for hiking that far (The Rockingham Recreational Trail is 26 miles total).  It is called a “Rail Trail” because it used to be part of the railway system and was converted over to a trail.  It is very popular with cyclists.  The cyclist pictured below had wide tires, presumably to deal with all off the ice as it was very icy.  He is a braver man than I.  There is also a 4 mile loop at the lake.

Overall, I would rate the trails I hiked easy to moderate in some parts.  The only hard part was dealing with the ice on the trails.  It went from being very easy to manage to downright dangerous due to the icy conditions.  As the snow melted in the morning it turned to mud, then iced over again.  During the morning hours, the ice was melting at a rapid pace.  Then, a few hours later, you could walk on the lake again because the temperatures dropped so much.  While the weather was warmish (by New Hampshire standards), you could hear the ice making noises as it melted.  You may be able to hear the “groaning” noises in the video below.

I did manage to walk out on the ice myself, after seeing everyone else out there first of course.

Meet Jackson, a Siberian husky.  Jackson has one blue eye and one brown eye.  I tried to photograph his eyes but he was blinking when the photo was taken.  You may be able to see his different colored eyes if you zoom in on the first photo. He was very playful  and friendly and what about that smile in the second photo!

Please like my Facebook page for photos not included in my blogs, videos and other fun stuff!  Thank you.

Although the area is mostly known for being the home of the New England Patriots and its adjacent marketplace, Patriot Place has another impressive attraction – The Nature Trail and Cranberry Bog.  Admission to the trail and bog is free and the parking is ample evident by the photo below.  You can also park in the lots in front of the store and walk down to the trail.

From the entrance the Nature Trail and Cranberry Bog greets you with a charming sitting area and pretty trees.

Although most of the vegetation is dead (save for a few stubborn blueberries and cranberries), a thin layer of ice covered most  of the pond and the trees are bare this time of the year, the Nature Trail and Cranberry Bog at Patriot Place in Foxboro, MA, is just as beautiful in the winter as it is during the summertime.

Located directly behind the expansive Bass Pro Shop, the Nature Trail and Cranberry Bog is a .5 mile loop with a 3 percent grade and some inclines as much as 12 percent. 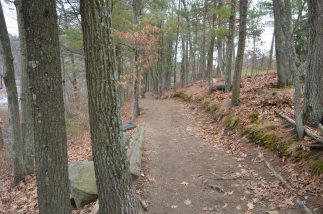 It is a mostly dirty trail with a few boardwalks and bridges.  There are two benches in the middle of the first walking bridge.  Overall, it is an easy to semi-moderate trail.  I saw people of all age groups handle the trail, inclines and all, with little difficulty. 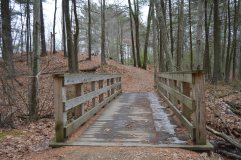 I found this strange, creepy looking branch or alien arm protruding from the ice.

An extra bonus for any Patriots fan is you can see Gillette Stadium (the stadium the Patriots play in) from the main road on the way to the Nature Trail and Cranberry Bog.  You can also catch a quick glimpse of some of the stadium from the entrance to trail and bog.

After finishing the loop, I met Chandler, a beautiful 6 year old tri-colored English Setter (thank you for the clarification, Adam).

Please check out my other WordPress blog: