Summary: Salem’s Chamber Of Commerce kicked off the month long “Haunted Happenings” celebration for the month of October. Scores of heroes, monsters and kids came together to celebrate and march!

What would a Halloween parade be without candy?

Well, since candy tossing is not permitted, some of the participants ran over to the onlookers with fistfuls of goodies.

What always entertains me about the Haunted Happenings parade is the unexpected and spontaneous things some of the marchers will do (more on this later).

For instance, who needs feet to walk?  These kids used an unorthodox method of marching. 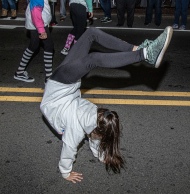 Some of the marchers chose to drive in the parade.  The parade participants arrived in a variety of vehicles, or, er, caskets,

Some of the more popular people in the parade weren’t the participants.  These motorcycle cops slowed down to share some high fives with their fans.

Holy Bat caves!  Where was Robin? 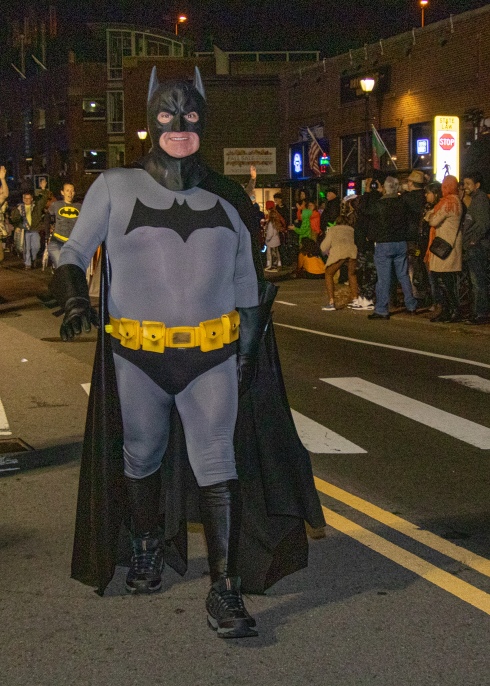 Shiver me timbers, pirates and other characters were also there. 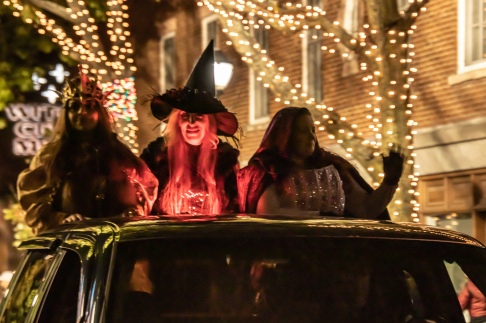 The usual suspects, Jason, Michael, Pennywise and Frankenstein’s monster were all their.  It’s a wonder we all made it out unscathed!

But, these guys and ladies were there to protect everyone!

Not all of the marchers were dangerous or scary, though.  Mermaids, poets and this nice gentleman who had “lotion in his basket” were also there.  Ok, maybe the last guy wasn’t so nice. 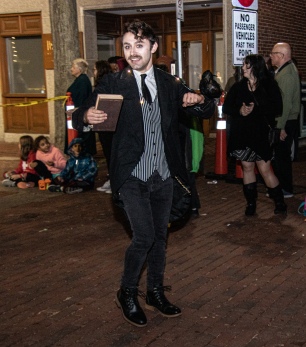 Of course, there also were bands, baton twirlers and flag wavers. The best part of the parade is seeing how much fun the kids are having.  In fact, it had some of them jumping for joy. 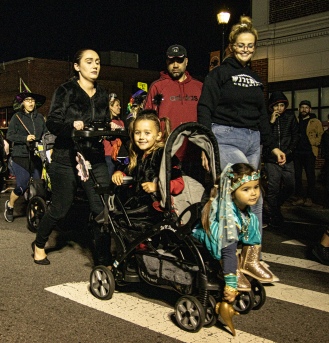 Just to preface this photograph, I will often bend down, kneel or squat down low when I photograph subjects or events, especially little subjects, so I can be at eye level when I photograph them.  So, I was photographing the parade, minding my own business when someone tapped me on the shoulder and got down to my eye level!  It was both unexpected and hilarious!

Not all of the great costumes were worn by the people in the parade, though.  All of these people got into the spirit of the parade!  Or, they may just regularly dress this way.  I don’t judge! 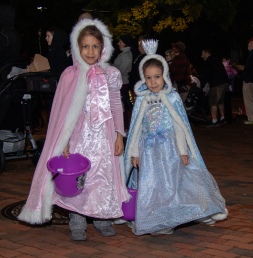 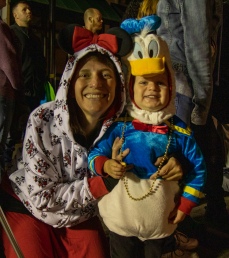 Funny story.  I saw this cute unidog or dogicorn while I was walking to the parade.  Well, it turns out I had actually photographed her at the parade last year as well.  Ginger the Goldendoodle is 2 years old.  I look forward to photographing you next year and for many more years to come, Ginger!

This was her costume last year!

This is the first time I used a dedicated flash (a flash that is not a pop up flash and not built into the camera) during night time photography.  Hard to believe since I have been doing this photography thing for a while now.  But most of my photography is done during the early morning, daytime or sunset hours.  This is something of a common misconception though.  I would later learn in my research that you can and in some instances should use a flash during daytime hours and on sunny days.  But, in the past, I was so unsure and unfamiliar with night time photography settings, I would often switch to video when I thought it got too dark to photograph images (this is what I did at last year’s Halloween parade).

I think you can see the difference a speed lite can make (I didn’t use the flash for all of my night time photographs because some subjects weer near light sources when I shot them and I did want to save as much of my battery life for my flash as they can often use a lot of power). Plus, the dark, night time feel can be a good look for photos, especially for a Halloween parade shoot.  I think you may be able to tell which photos I took with the flash and without based on the lighting in the photos.

I have learned a great deal about flash photography and the best teaching tool is experience.  Although I am still learning, one tip for a shoot like this is to never point the flash directly at your subject.  Try tilting the flash upward or at an angle, particularly when shooting outdoors.  I am using the Canon Speedlite 470EX-AI and I use the ETTL (Evaluative Through-The-Lens) mode which is similar to using the Automatic setting on your camera.  The autoflash, is the mode where the camera uses information obtained through the lens (“TTL”) to calculate how much light the flash needs to emit for the appropriate brightness. The camera then automatically sets the flash output accordingly.  My next goal is to learn how to use the manual features to maximize the effect of my speed lite.

Don’t forget to check out my Facebook page to see additional photos I have taken  from all over New England here: Facebook page.

Hi I'm Wayne. Welcome to my blog. I am a true New Englander through and through. I love everything about New England. I especially love discovering new places in New England and sharing my experiences with everyone. I tend to focus on the more unique and lesser known places and things in New England on my blog. Oh yeah, and I love dogs. I always try to include at least one dog in each of my blog posts. I discovered my love of photography a couple of years ago. I know, I got a late start. Now, I photograph anything that seems out of the ordinary, interesting, beautiful and/or unique. And I have noticed how every person, place or thing I photograph has a story behind it or him or her. I don't just photograph things or people or animals. I try to get their background, history or as much information as possible to give the subject more context and meaning. It's interesting how one simple photograph can evoke so much. I am currently using a Nikon D3200 "beginner's camera." Even though there are better cameras on the market, and I will upgrade some time, I love how it functions (usually) and it has served me well. The great thing about my blog is you don't have to be from New England, or even like New England to like my blog (although I've never met anyone who doesn't). All you have to like is to see and read about new or interesting places and things. Hopefully, you'll join me on my many adventures in New England! END_OF_DOCUMENT_TOKEN_TO_BE_REPLACED
This entry was posted on Monday, October 7th, 2019 at 12:08 am and tagged with dogs, Haunted Happenings, Massachusetts, New England, parade, Salem and posted in dogs, Halloween, Massachusetts, New England, parade, Salem, Uncategorized. You can follow any responses to this entry through the RSS 2.0 feed.
« Paul Revere House (Boston, MA)
Waterway/Lightway/Greenway (Boston, MA) »