Dates Of Event: July 26-28, 2019 (the event is usually held annually during the last weekend of July)

Parking: Since they close the streets for the event parking is limited. Parking is available at the Wonderland train stop. You may also find street parking on a side street. 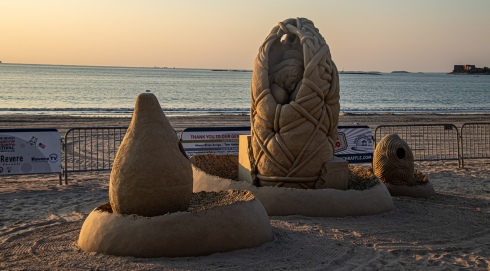 The early bird gets the unobstructed sand sculpture photos. Or, at least so I thought.

The last Sunday of July, I decided to wake up early and photograph the sand sculptures from the annual Sand Sculpting Festival at Revere Beach. There was one slight problem. Everyone else north of Boston had the same idea. The streets and sidewalks at the beach were already slightly clogged with revelers, sun seekers and photogs by the time I arrived “early” at 6 a.m. But, with some effort, I was still able to get a few shots without people, workers or other objects in the background of most of my shots.

Then, there were 8 additional sand sculptures which did not win a prize but are no less impressive.

So, instead of a big, dramatic countdown, let’s start from the top of the list!

First place went to Canadian artist Melineige Beauregard for her sculpture, “The Nest.” Melineige also works with snow and ice to make sculptures during the colder seasons. 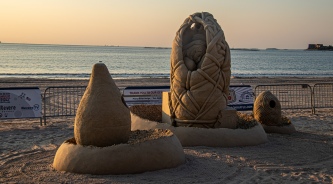 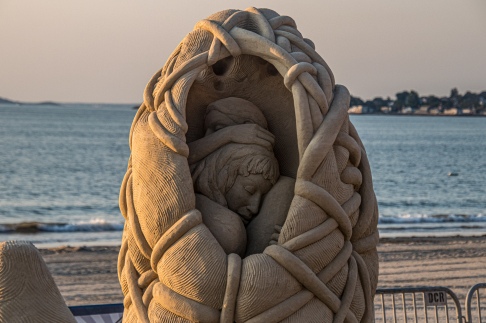 The first runner up in the contest was “Shell(ter)” by Jonathan (JOBI) Bouchard from Canada.

Third place went to Ilya Filimontsev from Russia for his sculpture “Guardian Angels.” 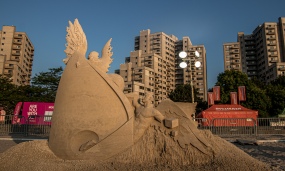 Fourth place went to Abe Waterman of Canada for his sculpture “I Just Can’t Bring Myself To Care, Doctor: An Ode To Apathy.” 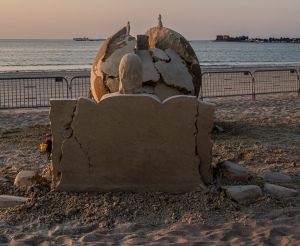 Dan Belcher from Missouri came in fifth place with his sculpture “Trance.” Dan has been creating sand sculptures around the world since 1990.

The Sculptor’s Choice Award which was voted on by all of the sand sculptors was awarded to David Mac from Belgium for his work “La Renaissance De Notre Dame.”

The People’s Choice Award was awarded to Sudarsan Pattnaik from India for his sculpture “Save Our Ocean Stop Plastic Pollution. 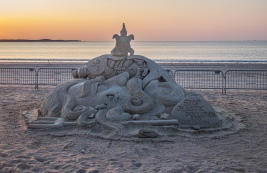 Although only five of the sculptures won a prize, they were worthy of our praise. One of my favorites from the festival was “Eye Of The Tiger” by Sue McGrew of Washington state. She has been sculpting sand for over a decade. 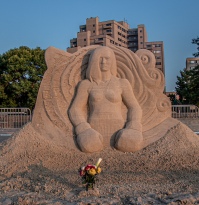 “Attempting Union” by Morgan Rudluff from Santa Cruz, California was another popular sculpture at the event. 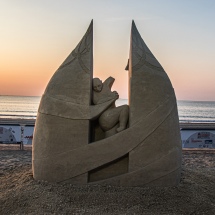 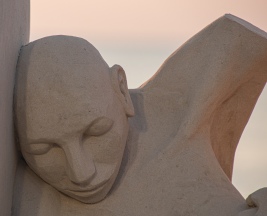 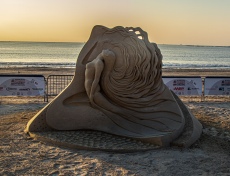 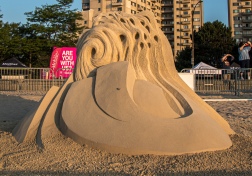 “Dream About Flight” by Aleksei Rybak from Russia is another sculpture that failed to qualify for one of the top spots in the competition. 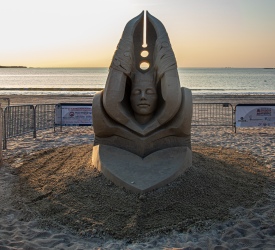 “Mama Look !! I Found My Teddy!” by Deb Barrett Cutulle was popular sculpture despite not placing in the top of the competition.

“Horsepower” by Maxim Gazendam was another sculpture that failed to place in the top five. 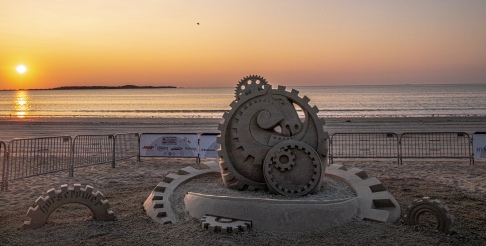 “The Birth Of A New Universe” by Pavel Mylnikov from Russia was another sculpture that failed to make the cut. 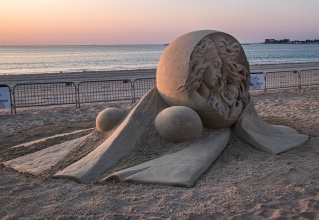 Last, but certainly not least, is “Lady Moon” by Benoit Dutherage From France. You have to be careful photographing the sunset, especially when you’re photographing it with other objects. For instance, I chose to use a lower aperture (5.6 for most of the photos) which left the sculptures often a bit dark. I also noticed that when I did edit the photos, I had to be careful to not use too much brightness or contrast or other buttons to control the darkness of the sculptures, especially the faces of the sculptures, because it can blow out the colors of the sunset. So, I chose to keep the sculptures a little dark and close up on the key features like faces to capture them without worrying about the background.

You can also try photographing from different angles where the shadows won’t be as bad. I was trying to avoid taking photos with people or other objects in the background. So it was hard to get photos of the sculptures from certain angles without getting people in the background and it also limited the angles I could shoot from. There were a lot of people there despite the early time of the shoot!

Since it’s unlikely the sand sculptures are going to move (and if the do leave immediately!), you can use AV (or Aperture Priority) mode so you can concentrate solely on the aperture settings. I have been using manual mode exclusively with my photos. But it took me a long time to get there. So, I do suggest using aperture priority mode if you’re not comfortable using full manual mode unless you’re photographing things that have action or some other element that requires a fast or variable shutter speed.

Hi I'm Wayne. Welcome to my blog. I am a true New Englander through and through. I love everything about New England. I especially love discovering new places in New England and sharing my experiences with everyone. I tend to focus on the more unique and lesser known places and things in New England on my blog. Oh yeah, and I love dogs. I always try to include at least one dog in each of my blog posts. I discovered my love of photography a couple of years ago. I know, I got a late start. Now, I photograph anything that seems out of the ordinary, interesting, beautiful and/or unique. And I have noticed how every person, place or thing I photograph has a story behind it or him or her. I don't just photograph things or people or animals. I try to get their background, history or as much information as possible to give the subject more context and meaning. It's interesting how one simple photograph can evoke so much. I am currently using a Nikon D3200 "beginner's camera." Even though there are better cameras on the market, and I will upgrade some time, I love how it functions (usually) and it has served me well. The great thing about my blog is you don't have to be from New England, or even like New England to like my blog (although I've never met anyone who doesn't). All you have to like is to see and read about new or interesting places and things. Hopefully, you'll join me on my many adventures in New England! END_OF_DOCUMENT_TOKEN_TO_BE_REPLACED
This entry was posted on Monday, September 2nd, 2019 at 12:55 am and tagged with beach, Massachusetts, New England, photographs, Photography, photos, Revere, Revere Beach, sand sculpting, sand sculptures, sunrise and posted in beach, photographs, photography, photos, sand sculpting, sand sculptures, Uncategorized. You can follow any responses to this entry through the RSS 2.0 feed.
« 5th Annual Foxborough Street Painting Festival (Patriot Place, Foxborough, MA)
Toytopia (Springfield Museums, Springfield, MA) »