Parking: Street parking, which is limited during festivals, costs .75 an hour (4 hour limit) and there are several parking lots and garages.  You can find more information about parking in Salem here.

Highlights: A collection of figureheads displayed throughout downtown Salem

Tip(s): While most of the figureheads are located on Essex St, follow the red historical tour line throughout the city to find the remaining figureheads

In observation of the Salem Arts Festival, the Salem Historical Society decided to send out the ladies of Salem.

The Ladies Of Salem are a collection of figureheads constructed by a variety of artists.

While these figures have been displayed before (see related post above), when I did photograph these figureheads in the past there weren’t as many on display as theere were this past weekend. Some of them were missing (they had been destroyed or stolen off their mounted displays) and  others looked a little roughed up.  Besides I was in Salem to photograph the Arts Festivals (posts on this event soon).  So, I thought I would photograph all of the figureheads in their current state.  And, much to my delight, they all looked as though they may have been touched up a bit and the were all actually there.  Since they were posted rather high on lamp posts, a ladder or cherry picker would have came in handy.  But it was still fun photographing all of the figureheads.  Plus, it gave me a chance to photograph some dogs along the way.

There appeared to be a few figureheads on display that either were not posted or I may have missed in my earlier visit in 2016.  The tricky thing about looking for these figureheads is there wasn’t a map or website with the locations of the figureheads’ locations.  This made it more difficult but also more fun.

The one tip I was given by the helpful workers at the tourism office is to follow the red line which represents the Salem Heritage Trail and includes many of the famous historical haunts in Salem.  The trail is only about a mile or so and there are lots of fun and interesting things to see along the trail.

More than half of the 21 Ladies of Salem are displayed along the Essex Street Pedestrian Mall. The other figureheads may be found on Derby and Washington streets, as well as one that is posted at Old Town Hall.

The figureheads are put on display from time to time, especially for different events such as the arts festival or the maritime arts festival.

The artists were given a blank canvas on a 33-inch-tall-by-14-inch-wide and 14-inch-deep figurehead molded of a hard yet lightweight fibrous material. Before the mounting board is attached, the figureheads weigh only 7 pounds.

I wanted to take closeups of the figureheads’ faces to show off the details of them.  I also like to think of them as being in deep thought, gazing off to the sea or some other distant place.

Most of the figureheads are dressed or painted to represent the sponsors of the figurehead.  For instance, the figurehead that is sponsored by Essex’s N.Y. Pizza & Deli in the Salem Museum Place Mall (aka Witch City Mall), has a crown and “I Love Pizza” t-shirt on.  You may also notice stickers of bees on the signs of the figureheads.  The bees are part of the “bee proud” awareness promotion for pride month.

Figureheads on ships were said to have strong magical or religious significance.  As you may notice from the photos below, women were largely used as the shapes of the figureheads.  They were supposed to be used to appeal to the ocean gods and spirits and cause these spirits and gods to be stricken by their beauty, enabling the ships to proceed without any interference from these potential evil doers.

The Phoenicians are said to have been the first people to use figureheads, from around 2500 to 539 BC, when they adorned the prows of their oared galleys with wooden carvings that depicted animals, birds, dieties, and serpents.

The Egyptians and Chinese instituted the practice of painting eyes, known as Oculi, on the bows of their vessels, so that they may find their way across the oceans.

Catholic countries, such as Spain, used religious figureheads, such as Jesus Christ and the Virgin Mary, in the hopes that these figureheads would bring them safety and fortune in their voyages.

However, the “golden age” of figureheads is said to be between 1790 to about 1825.  During this time frame many warships and merchant ships built in North America and England were decorated with these artful figureheads.

But, the figureheads I found were built much more recently.

The first figurehead I spotted is by the artist Shalimar.

This figurehead was made by the artist Demetrius Lacroix. 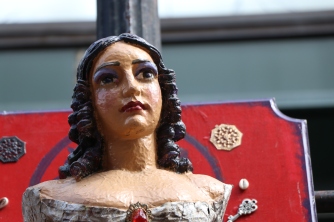 This figurehead, which I did not include in my earlier post about the Lady Of Salem figureheads, was sculpted by Alicia Irick Cohen.  The figurehead does have some obvious wear and tear, unfortunately. 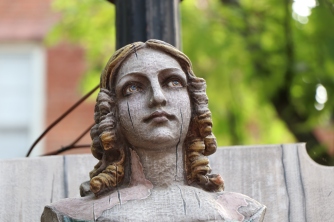 This figurehead was created by the YMCA/Girls Today Program. 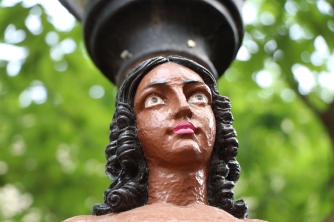 The artist for this figurehead is Amberlynn Narvie. 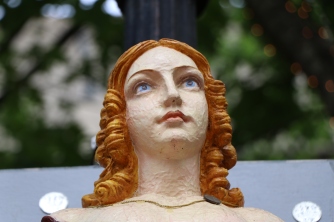 Niko Papadimitriou is the artist for this figurehead. 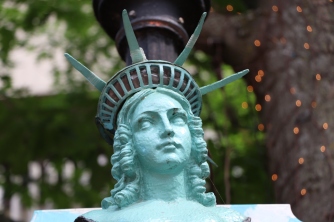 This figurehead was created by Vonn Bittercup.

The artist for this figurehead is John Devine. 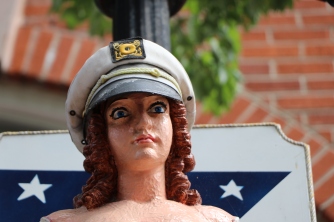 Kenneth Glover is the artist for this figurehead. 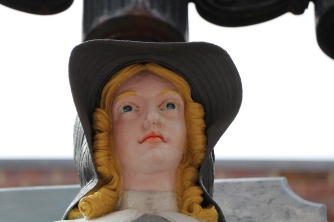 This colorfully painted figurehead was made by Cynthia Mikula Smiszek. 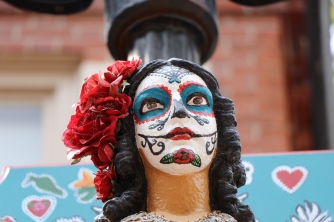 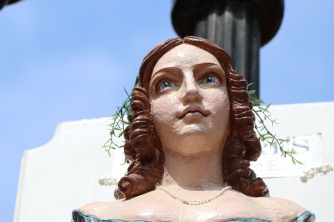 Sheila Billings made this figurehead.

The figurehead below was crafted by Jeanne Pare 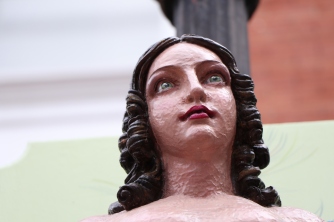 The next figurehead was painted by Jill Pabich.

This figurehead was painted by Kerry May Killam.

Jeanne Pare-Kapnis painted this figurine that was located on Derby St.

Mary-Ellen Smiley painted this figurehead which was located in the Old Town Hall near the Essex Pedestrian Walkway. 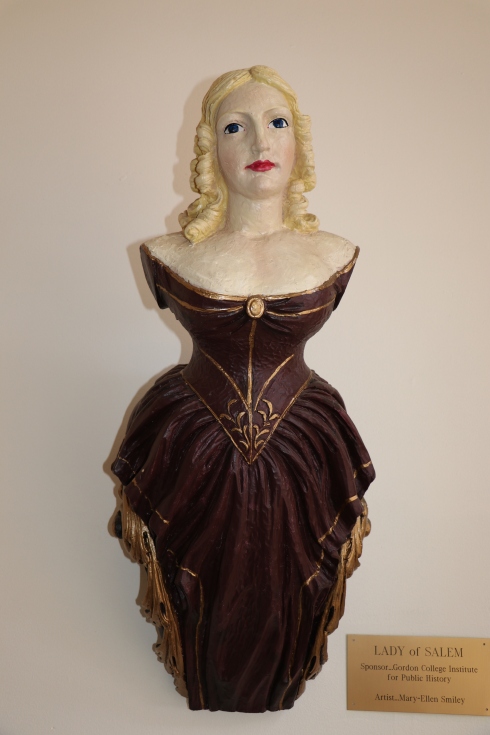 I could not locate a sign with the name of the artist for this figurehead.  Unlike most of the other figureheads, this one was located in a store on  Essex St (Witch Tee;s) 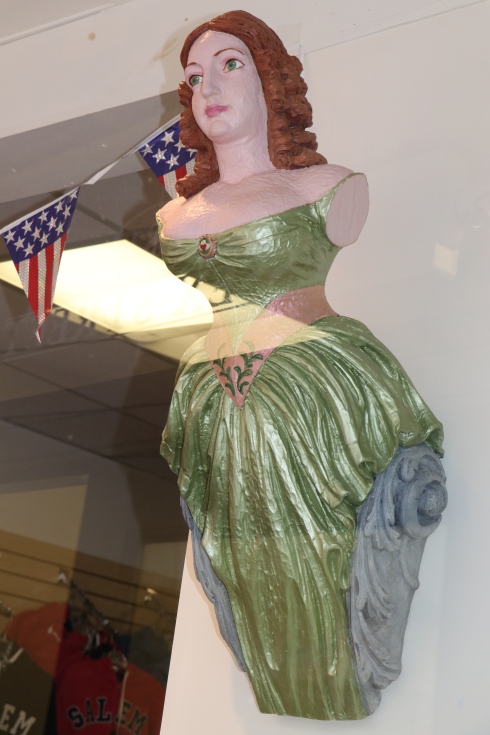 Although not part of the Lady Of Salem display, there are additional figureheads in the Peabody Essex Museum, also on Essex St.  You would have to pay an entrance fee to the museum to view them.  But I have a photos of them below from my visit October 8 of last year. 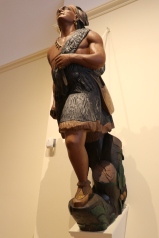 Besides being the weekend of the arts festival, the weather was perfect for visitors and their dogs.  There were lots of dogs enjoying the figureheads and the festival.  Below are a few of the cute four legged visitors I met during my visit.

Don’t blink or you might miss Wink, a 13 year old Pomeranian and Brody’s sibling.

Aster, who is as handsome as the flower he is named after, is a Border Collie and Australian mix. 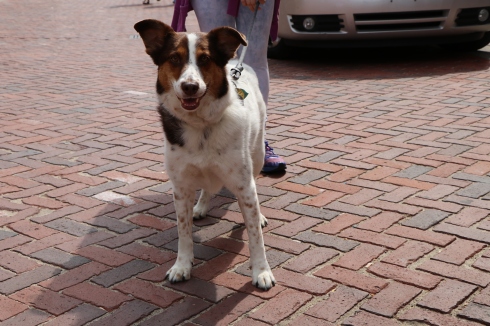 Luna is a 3 year old Chihuahua.  He has very cute features.

I love Lance’s fur and and sweet nature.  Lance is a 9 year old Standard Poodle.

I am not sure how long the Ladies will be on display, although they may have all been taken down after the arts festival which ended Sunday (June 3).  I am pretty sure you may see them again during the summer, specifically during the 30th Annual Salem Maritime Arts Festival August 4th and 5th of this year.  It’s a pretty good bet you may see me there!

Also, keep an eye out for my photographs from the 10th Annual Salem Arts Festival from the first weekend of June which I will be posting in parts since there was so much to show you all!

Hi I'm Wayne. Welcome to my blog. I am a true New Englander through and through. I love everything about New England. I especially love discovering new places in New England and sharing my experiences with everyone. I tend to focus on the more unique and lesser known places and things in New England on my blog. Oh yeah, and I love dogs. I always try to include at least one dog in each of my blog posts. I discovered my love of photography a couple of years ago. I know, I got a late start. Now, I photograph anything that seems out of the ordinary, interesting, beautiful and/or unique. And I have noticed how every person, place or thing I photograph has a story behind it or him or her. I don't just photograph things or people or animals. I try to get their background, history or as much information as possible to give the subject more context and meaning. It's interesting how one simple photograph can evoke so much. I am currently using a Nikon D3200 "beginner's camera." Even though there are better cameras on the market, and I will upgrade some time, I love how it functions (usually) and it has served me well. The great thing about my blog is you don't have to be from New England, or even like New England to like my blog (although I've never met anyone who doesn't). All you have to like is to see and read about new or interesting places and things. Hopefully, you'll join me on my many adventures in New England! END_OF_DOCUMENT_TOKEN_TO_BE_REPLACED
This entry was posted on Tuesday, June 5th, 2018 at 8:20 pm and tagged with aert festival, art, dogs, figureheads, Lady Of Salem, Massachusetts, New England, photographs, Photography, photos, Salem and posted in art, dogs, Lady Of Salem, Massachusetts, New England, photographs, photography, photos, Salem, Uncategorized. You can follow any responses to this entry through the RSS 2.0 feed.
« Chicopee Memorial State Park (Chicopee, MA)
10th Annual Salem Arts Festival – Part I (Salem, MA) »