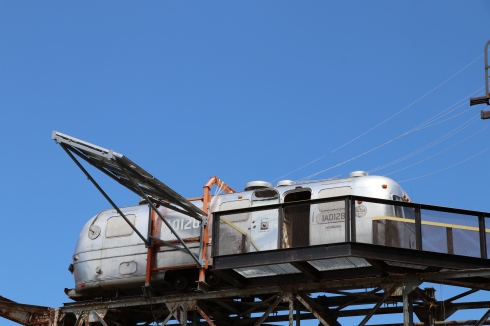 Parking: There are four parking lots in the museum parking area

Not all of the art at MASS MoCa is indoors.

This pole with mirrors on it is just one of the unusual work of art on the grounds of the museum.  This work of art is part of the Totally Totem exhibit by Marko Remec that was on the grounds of the museum in 2016.  Marko attached ready-made objects such as mops, brooms, safety mirrors, and rear-view mirrors to utility poles, transforming them into contemporary totems. 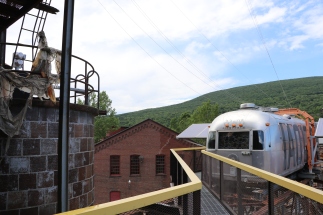 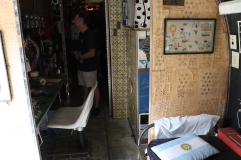 This work of art, part of a three part art piece titled, “All Utopias Fell”, was created by Michael Oatman.  The trailer, called The Shining, is a 1970’s era Airstream mobile home that Oatman bought online from a dealer in Ohio.

The worst part of the exhibit for some may be the walk along some narrow steps inside a creepy boiler house, more on that later, and then a short jaunt along a bridge to the Airstream.

““The Library of the Sun”, the decorative interior of the Airstream is the second part of the exhibit.  Decorations, prints as well as a variety of other vintage and novelty items line the walls and shelves of the trailer.  Many of the items inside the Airstream are humorous relics of the past.  A rotary phone, a sewing machine, a workbench, books held into place with leather safety belts and even a photo of Guy Lombardo and real jars of preserved food. are just a few of the vintage memorabilia inside the mobile home.

The third and final part of the exhibit is “Codex Solis” which is a a solar panel project that Oatman has worked to create with the museum for the past 3 years.  The solar panels Every task light and video screen on the Airstream is powered by the solar panels according to Oatman.  According to their website, roughly 25% of MASS MoCA’s energy is produced on-site through solar panels on these roofs

The views from the exhibit are stunning.

The work of art is inspired by vintage era pulp aeronauts such as Buck Rogers, Tom Swift, and Tom Corbett: Space Cadet, as well as the works of Giotto, Jules Verne, NASA, and Chris Marker’s 1962 film La Jetée.  Slightly larger than my apartment, The Shining does seem like it could be a little cramped for most people.

These cans were strategically placed to form some artistic displays. 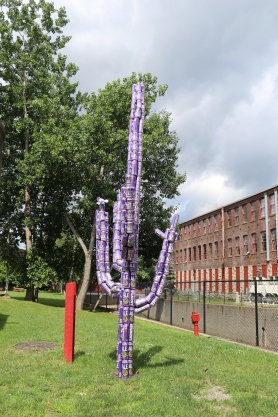 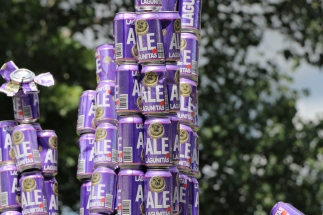 “All Those Vanished Engines” is an audio and visual exhibit by Stephen Vitiello.  Inspired by a commissioned text by novelist Paul Park, the exhibit uses both sound and visual arts to entertain its viewers.

The Boiler House was commissioned by Sprague Electric Company in 1947.  It was preserved by the museum as a relic of the great industrial age of carbon.  There are three boiler hoppers, coal hoppers, steam fittings and ash disposal conveyors.  Especially after viewing the solar panels on the roofs of some of the buildings, it is a reminder of how far we have come in our technology.  I couldn’t help but think Freddy Krueger was lurking around one of the corners. 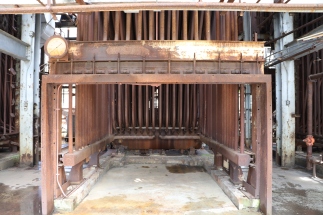 There are a lot of strange works of art on th emuseum grounds.  I’m not sure what these are supposed to be. 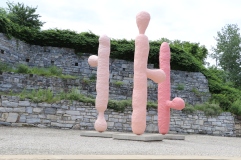 Remind me to never bring my camera to MASS MoCA.  There is so much more art to share from this museum.  But, I may be taking a break from posting the art from this haven for art lovers.

I have some other interesting photos from places and events I have visited recently.  So, I am taking a short break from my MASS MoCA posts.  But, I will resume my MASS MoCA series after I post some photos of winter in New England!

Hi I'm Wayne. Welcome to my blog. I am a true New Englander through and through. I love everything about New England. I especially love discovering new places in New England and sharing my experiences with everyone. I tend to focus on the more unique and lesser known places and things in New England on my blog. Oh yeah, and I love dogs. I always try to include at least one dog in each of my blog posts. I discovered my love of photography a couple of years ago. I know, I got a late start. Now, I photograph anything that seems out of the ordinary, interesting, beautiful and/or unique. And I have noticed how every person, place or thing I photograph has a story behind it or him or her. I don't just photograph things or people or animals. I try to get their background, history or as much information as possible to give the subject more context and meaning. It's interesting how one simple photograph can evoke so much. I am currently using a Nikon D3200 "beginner's camera." Even though there are better cameras on the market, and I will upgrade some time, I love how it functions (usually) and it has served me well. The great thing about my blog is you don't have to be from New England, or even like New England to like my blog (although I've never met anyone who doesn't). All you have to like is to see and read about new or interesting places and things. Hopefully, you'll join me on my many adventures in New England! END_OF_DOCUMENT_TOKEN_TO_BE_REPLACED
This entry was posted on Sunday, February 4th, 2018 at 9:30 am and tagged with art, Boiler Room, MASS MoCA, Massachusetts, Michael Oatman, New England, north adams, photographs, Photography, photos, The Shining and posted in art, MASS MoCA, Massachusetts, New England, north adams, photographs, photography, photos, The Shining, Uncategorized. You can follow any responses to this entry through the RSS 2.0 feed.
« MASS MoCA (North Adams, MA) – Part IV
Ice Sculptures (Greenfield, MA) »