History On The Homefront: The Power Of The Poster (Springfield, MA)

Parking: There is free parking in the main parking area for about 50 cars and an overflow lot across the street

Highlights: posters from the World War I era

War and propaganda have gone together for as far back as America itself.   In fact, the currently prevalent “Don’t Tread On Me” flags you may often notice at rallies and on bumper stickers was originally a propaganda piece created by Benjamin Franklin and adopted by the Continental some 240 years.

Propaganda, as a weapon, may be just as an important tool as any bomb or bullet.

Springfield (MA) Museum’s “History On The Homefront” exhibit, on display during the summer of this year are evidence of the importance and the effect of propaganda.

The posters, on loan from some museum patrons, do not just to promote America’s efforts in the war, they were also meant to promote helping the soldiers abroad.

What struck me most while I researched this post was just how connected people were at this time with not only the military but also the government.  Not only did just about every fit male of service age serve, if they did not serve, everyone seemed to know someone who was serving.  And those that could not or would not serve often volunteered in other ways.  Their service, “voluntary rationing” and volunteerism for the war effort is very impressive.

The posters were created by such artists as James Montgomery Flagg, Marie D. Page and, in the photo below, Charles Buckles Falls. 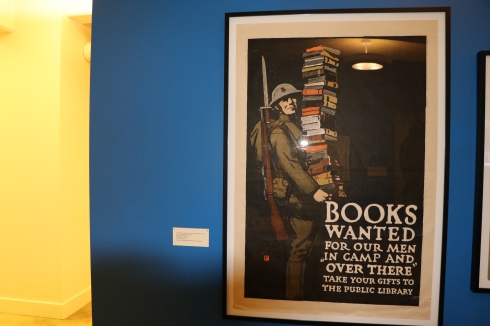 Book Wanted For Our Men In Camp And Over There by Charles Buckles Falls.

The call to donate books was met by the public.  According to the literature from the exhibit, the American Library Association (ALA) distributed 7 to 10 million books and magazines that were generously donated by the public to more than 500 locations including military hospitals.

You can still donate books to soldiers by visiting the aptly named website, Books For Soldiers.  Or at the website Operation Paperback.

Save…, Wheat… by Frederic G. Cooper

With many of the people who would have worked on farms away overseas and food shortages becoming prevalent, it was evident that people needed to cut back on their food intake. In what is for many of us a “world of plenty”, it is often hard to realize just how much a food shortage could affect a country.  We often take this way too much for granted.

Instead of implementing food rationing, which President Roosevelt thought would lower morale, President Roosevelt decided to work with the Division of Pictorial Publicity to encourage people to voluntarily cut back to help with food shortages.  Themes like “Meatless Monday” (some of us still do this) and “Wheatless Wednesdays” (yum) were announced.  People were also encouraged to eat local and even grow their own food.  Many people followed this suggestion and created their own “Victory Garden.”  One of the rallying cries from the effort was “Food Will Win The War.”

He Can Win by Dan Smith.

This poster by Dan Smith was a tribute to the Red Cross.  Looking for a way to help those fighting overseas, people turned to the Red Cross to make donations and volunteer.  President Wilson appointed a War Council to help raise funds and expand the organization and people responded.  It is estimated that at its height 22 million women joined the American Red Cross during the war.  The most popular means for helping the red Cross was by knitting goods.

The American Red Cross still helps people in the military and military families to this day. 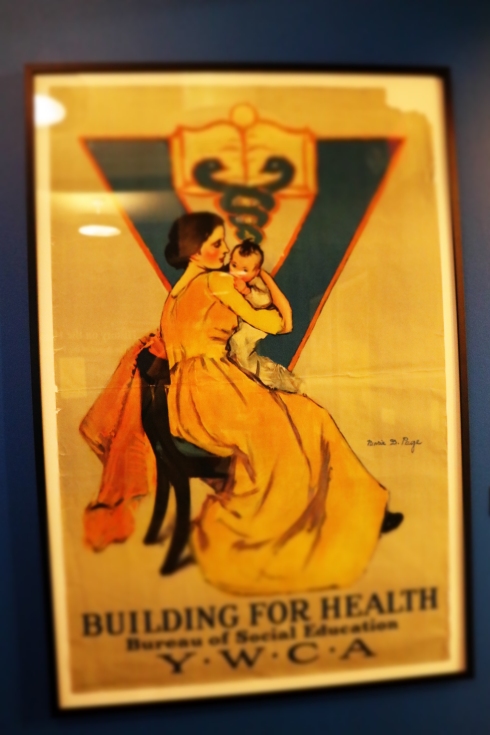 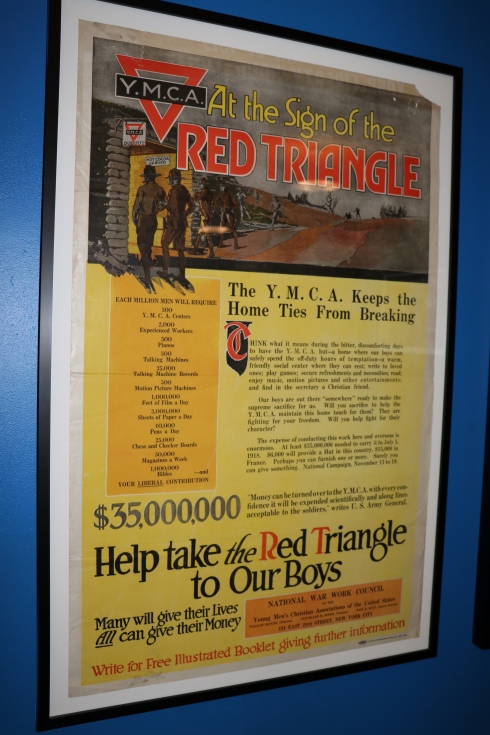 At the Sign of the red Triangle – the YMCA keeps the home ties from breaking by John F. Butler. 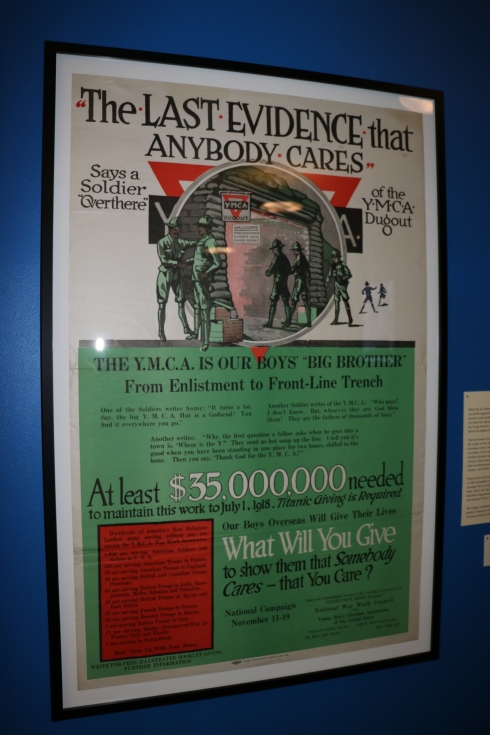 The last evidence that anybody cares by John F. Butler

To maintain morale and keep the men serving overseas mentally and emotionally stable, the Department of War asked 7 community organizations such as the Knights of Columbus, the YWCA and the YMCA to provide social, health and welfare services to the people serving overseas.

During World War I, the YMCA provided 90 percent of all welfare work to the troops of the American Expeditionary Forces in Europe.  They operated rest and recreation leave  centers.  They also served 8,000 troop trains, provided 4,000 huts for recreation and 1,500 canteens and post exchanges.  At their centers, the YMCA volunteers offered religious support, entertainment and miscellaneous items such as trading cards and books.

The Soldiers by Harold J Rabinovitz 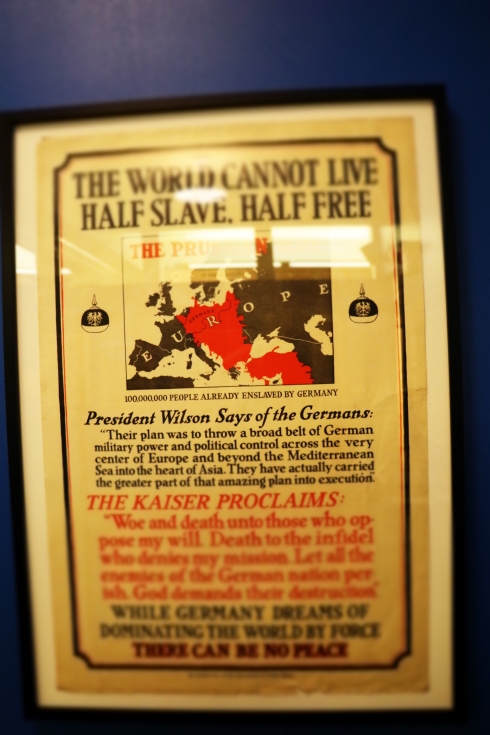 The World Cannot Live Half Slave, Half Free by an unknown artist.

This poster (above) was made by the Committee of Public Information which was headed by (in)famous muckraker George Creel.  The committee was tasked with “selling” the war.  The committee created posters and other propaganda related items to portray the kaiser as a barbarian and spread sensational stories of German soldiers committing atrocities against innocent civilians.  These stories of atrocities would later be discredited.  Yet, the committee proved to be effective in their efforts.

I want you for U.S. Army – Nearest recruiting station by James Montgomery Flagg.

He is Getting Our Country’s Signal – Are You?  Join The Navy by an unknown artist 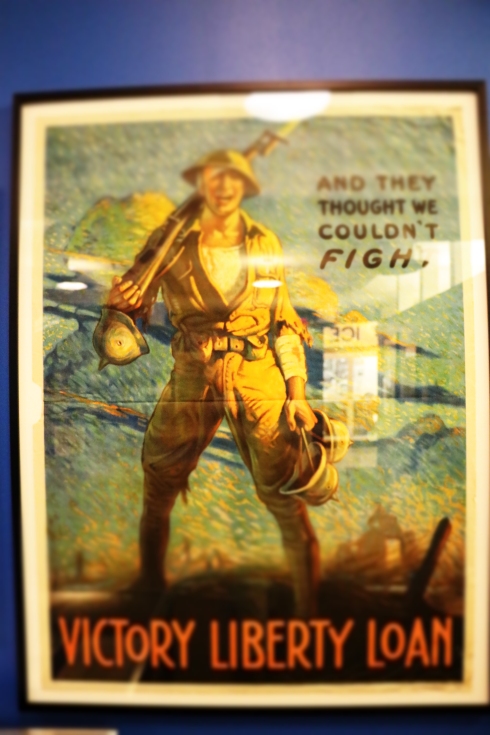 And they thought we couldn’t fight – Victory Liberty Loan by Vic Forsythe.

There was also a display of items from World War I

The helmet in the photo is a U.S. Army Helmet Model 1917.  This helmbet was modeled after the British Army Helmet (called a “soup bowl” helmet).  The binoculars to the right in the photo were used by the Troops of the 104th during World War I.  In the middle of the photo are a prayer book, personal information card and holy medal which were carried by Francis Lynch.  Lynch is the man shown in the photo to the left.  Lynch’s photos may have been chosen because he was a Springfield (MA) native (the same city as the museum’s location).  Francis lied about his age and joined the U.S. Army in 1917 at the age of 16 using his older brother Daniel’s name.

Hi I'm Wayne. Welcome to my blog. I am a true New Englander through and through. I love everything about New England. I especially love discovering new places in New England and sharing my experiences with everyone. I tend to focus on the more unique and lesser known places and things in New England on my blog. Oh yeah, and I love dogs. I always try to include at least one dog in each of my blog posts. I discovered my love of photography a couple of years ago. I know, I got a late start. Now, I photograph anything that seems out of the ordinary, interesting, beautiful and/or unique. And I have noticed how every person, place or thing I photograph has a story behind it or him or her. I don't just photograph things or people or animals. I try to get their background, history or as much information as possible to give the subject more context and meaning. It's interesting how one simple photograph can evoke so much. I am currently using a Nikon D3200 "beginner's camera." Even though there are better cameras on the market, and I will upgrade some time, I love how it functions (usually) and it has served me well. The great thing about my blog is you don't have to be from New England, or even like New England to like my blog (although I've never met anyone who doesn't). All you have to like is to see and read about new or interesting places and things. Hopefully, you'll join me on my many adventures in New England! END_OF_DOCUMENT_TOKEN_TO_BE_REPLACED
This entry was posted on Friday, December 29th, 2017 at 12:35 am and tagged with Massachusetts, New England, photographs, Photography, photos, propaganda, Springfield, Springfield Museum, war posters and posted in Massachusetts, New England, photograph, photographs, photography, photos, Springfield, Uncategorized, war posters. You can follow any responses to this entry through the RSS 2.0 feed.
« 27th Annual Gingerbread House Contest (Portsmouth, NH)
Gingerbread In Space (Springfield, MA) »

6 responses to “History On The Homefront: The Power Of The Poster (Springfield, MA)”