We are closed on the following holidays:

Parking: There is free parking for about 50 cars in a lot in front of the museum

Handicapped Accessible:The museum is wheelchair accessible and guests may request a wheelchair at the front desk (a photo ID must be left). Wheelchairs are available on a first-come, first-served basis.

Highlights: historical items, photos and videos from John F Kennedy’s life.  There is also a special Kennedy 100 Milestones And Mementos exhibit which is scheduled to be on display until May, 2018. 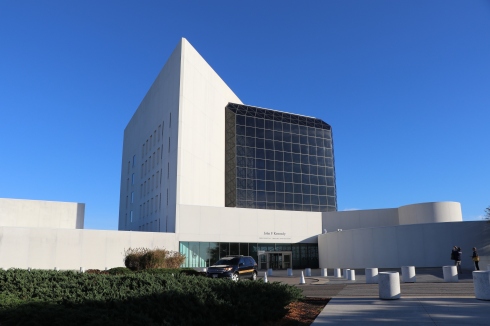 “What could have been?” is probably the most common phrase people come away with after their visit to the John F Kennedy Presidential Library And Museum

You can’t help but feel inspired while walking through the museum.  Even if you’re not an admirer of the man or his family, just looking at the historical items of the era and seeing how much he accomplished at such a young age is bound to make you feel motivated.  By the time he died at the age of 46, he had been a senator, war hero and President.  I’m  approaching that age and I’m not quite there in my career accomplishments.  Yet.

The first room you enter after paying your admission is a room with many of the items from JFK’s younger school days.  I actually used to use JFK’s less than stellar grades in his early education as an excuse when I didn’t always do well on my report card…it didn’t work out well for me, though. 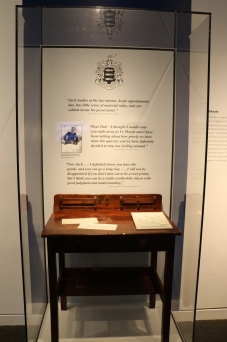 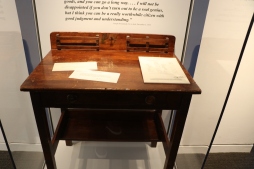 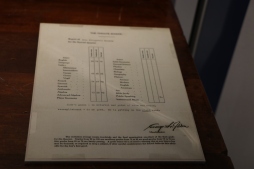 There is also a photo of JFK with hsi favorite boat, the Victura, and his U.S. Navy dog tag.  During the summer, the Victura can be found on the lawn of the Kennedy Library.  However, during the winter months, and when I was visiting, it is kept at the Crosby Yacht yard in Osterville, Massachusetts where she was built. 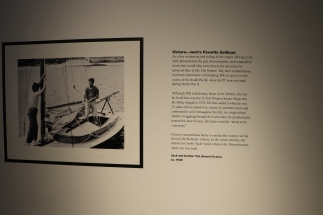 Next to the first room of the museum is an auditorium where you can watch a quick film (about 20 minutes) about the life of President Kennedy.

After the film ends, visitors follow a stairwell into the heart of the museum where many of the historical items from Kennedy’s Presidency can be found.

The museum displays historical memorabilia and videos and photos in chronological order.  In the beginning of the museum you can view videos of the senator and presidential candidate Kennedy. 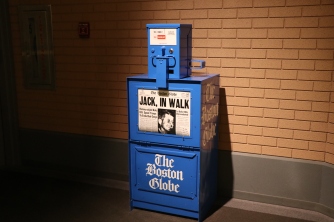 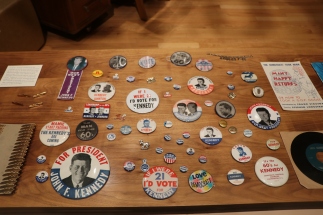 I especially liked the examples of shops and other memorabilia from that era. 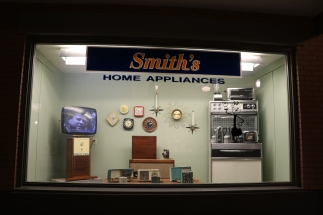 Looking at the electoral map from the night of the election shows a sharp contrast to what it would look like these days. 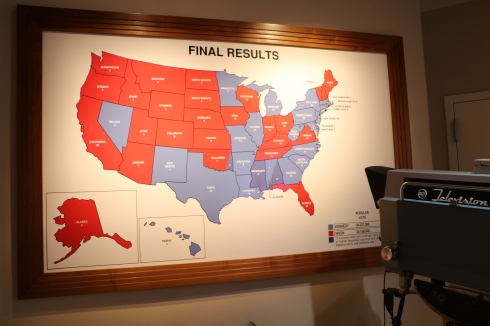 The states in red show states the Republican candidate (Richard Nixon) won.  The blue states are states Kennedy won.  The chief reason behind this, besides the changing political landscape, is that Nixon was the senator from California which would explain in part why he did so well on the west coast.  Kennedy’s running mate, Lyndon Baines Johnson (who was from Texas), helped Kennedy carry many of the southern states.  In fact, the whole Kennedy/Johnson relationship is full of dichotomy and complexities.  It has been believed, and essentially proven, the two men did not like each other very much before the election (and not the first time a president and vice president didn’t like each other).  But, Kennedy and his people thought they needed Baines on the ticket to help deliver the south.

The book shown below, an 1850 edition of the Douay English translation, is the Kennedy family bible that was brought over from Ireland by his forebears.  It is the bible JFK was sworn in on during his inauguration. 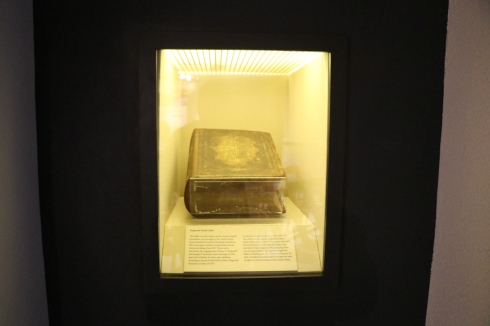 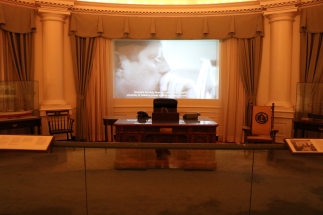 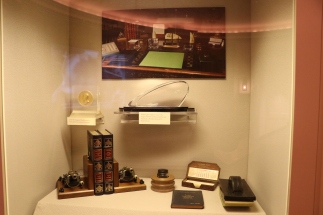 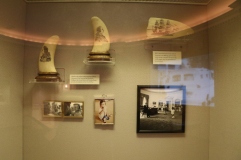 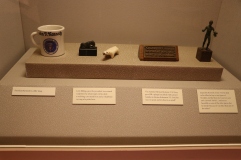 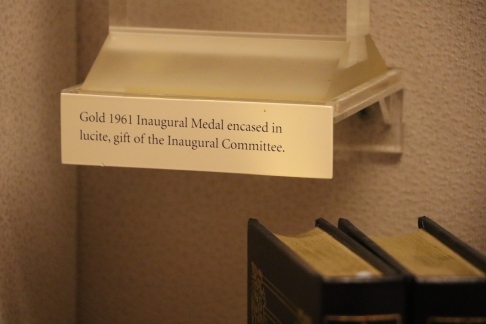 In the photo below are two whale teeth etched with portraits of King Christian VI of Norway and Frederick William, the Great Elector of Brandenburg.  These whale teeth were used as book ends in the Oval Office.

Next to the whale teeth, to the right, is a whale tooth scrimshaw inscribed with a full rigged ship.  This was a gift from his close friend and class mate at Choate School, Lem Billings.  Kennedy kept this on his desk.  So much for saving the whales. 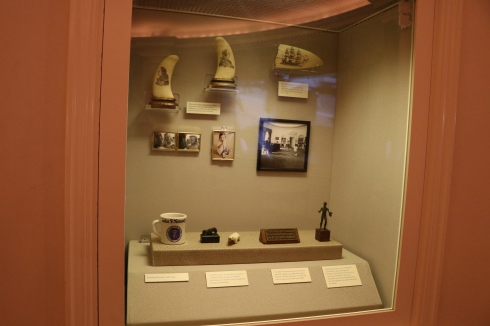 The section with Jacqueline’s personal items is wonderful also. 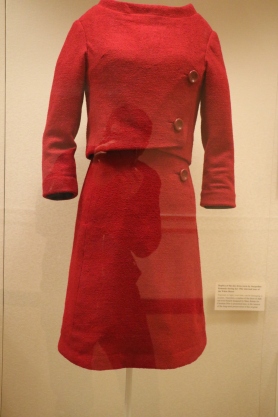 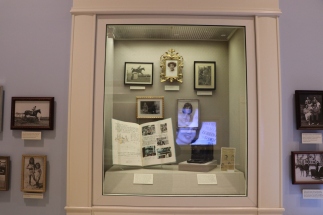 One of the more interesting things I found at the museum were gifts other world leaders had given Kennedy and Jacqueline Kennedy, the first lady.

This stucco head of Buddha (circa 2nd century A.D.) was given to the president and his wife by the king of Afghanistan, Mohammed Zaher Shah. 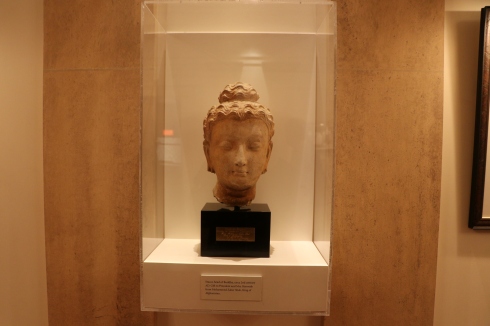 This gilded metal kris and sheath, decorated with ivory and precious stones, was given to the president by President Achmed Sukarno of Indonesia on April 24, 1961. 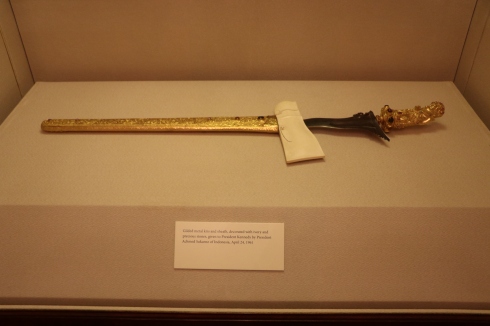 This congratulatory message was sent to President Kennedy on his inauguration in 1961 from the surviving crew and captain of the Amagiri.  What makes that so interesting?  The Amagiri was the Japanese destroyer that on August 2, 1943, rammed PT 109, the boat Kennedy and his men were on during World War II. 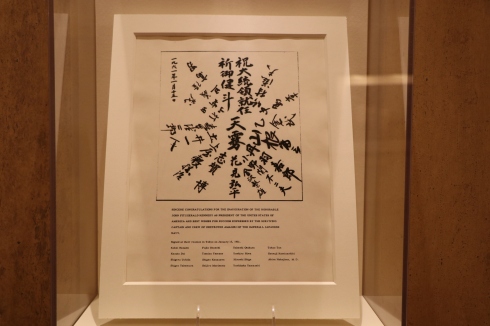 This Carrickmacross lace napkin was presented to President Kennedy by Prime Minister Sean Lemass of the Irish Fianna Fail party. 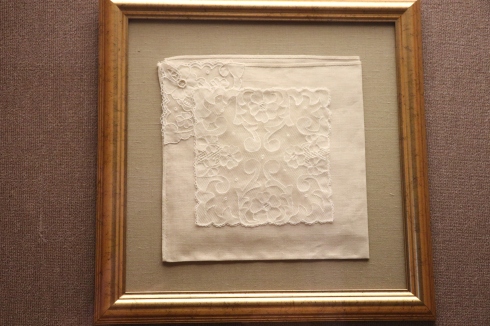 While President Kennedy’s assassination is acknowledged, there is not much on exhibit about the assassination.  Rather, they focus on how the world responded to the tragedy. Fittingly, a darkened hallway leads to an area with photos of memorials dedicated to the slain president from all over the world. 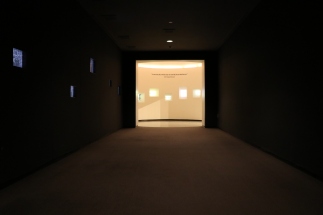 There is also an area dedicated to the Kennedy family after President Kennedy’s death.  There are books written about John Kennedy, mementos that were made in his honor (such as the half dollar piece that was issued after his death) and the rest of the Kennedy family.   There are also historical artifacts such as a piece of the Berlin Wall which signify way the world has changed and how John Kennedy and other members of his family, specifically Ted, had possibly helped shape these changes.

There are also short films that play in small cinemas throughout the day at various locations in the museum.

The biggest attraction at the museum, however, is a special exhibit called JFK 100 Milestones and Mementos. 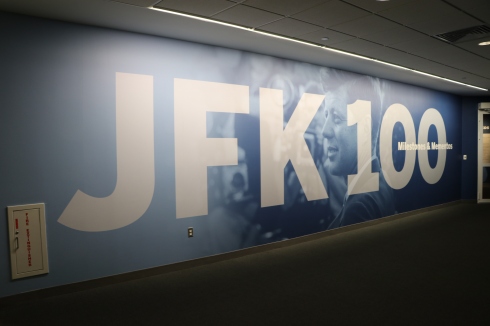 This exhibit is on display to celebrate what would have been the 100th birthday (his birthday was May 29, 1917).  Everything from the hat and gloves he wore on his inauguration day, his first baby photo to hiss iconic Rayban sunglasses that he popularized are on display in chronological order of his life.  The exhibit is planned to be on display until May, 2018. 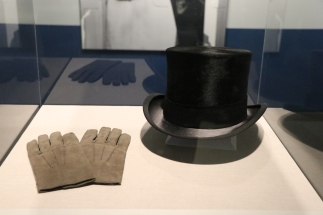 There are far too many items to post photos of.  Below are a few of the items that stood out to me.

Pictured below is the Profile In Courage Award that has been awarded annually since 1990.  Past recipients include John McCain and Russell Feingold (co-winners in 1999), Gerald Ford and John Lewis (co-winners in 2001), Gabrielle “Gabby” Giffords (2013) and former President Barack Obama (2017)

Behind the museum there is a path used by joggers and people just going for a walk.  There are some pretty views of the Boston skyline and the water.  There is also a pier you can walk out onto and look out at the bay.  It is a quiet place to ponder all that you have seen at the museum. 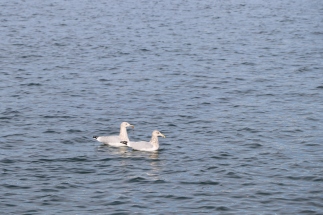 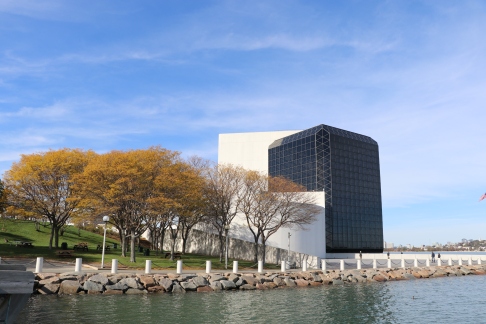 Sadly, we will be observing the death of this notable president later this month.  But, rather than focusing on his tragic death, it is much better to focus on his life and not his death.  This museum is a powerful reminder of his life and legacy.

Hi I'm Wayne. Welcome to my blog. I am a true New Englander through and through. I love everything about New England. I especially love discovering new places in New England and sharing my experiences with everyone. I tend to focus on the more unique and lesser known places and things in New England on my blog. Oh yeah, and I love dogs. I always try to include at least one dog in each of my blog posts. I discovered my love of photography a couple of years ago. I know, I got a late start. Now, I photograph anything that seems out of the ordinary, interesting, beautiful and/or unique. And I have noticed how every person, place or thing I photograph has a story behind it or him or her. I don't just photograph things or people or animals. I try to get their background, history or as much information as possible to give the subject more context and meaning. It's interesting how one simple photograph can evoke so much. I am currently using a Nikon D3200 "beginner's camera." Even though there are better cameras on the market, and I will upgrade some time, I love how it functions (usually) and it has served me well. The great thing about my blog is you don't have to be from New England, or even like New England to like my blog (although I've never met anyone who doesn't). All you have to like is to see and read about new or interesting places and things. Hopefully, you'll join me on my many adventures in New England! END_OF_DOCUMENT_TOKEN_TO_BE_REPLACED
This entry was posted on Sunday, November 19th, 2017 at 12:13 am and tagged with Boston, Historical, history, John F Kennedy Presidential Library And Museum, John Fitzgerald Kennedy, Massachusetts, New England, Pfresident Kennedy, photographs, Photography, photos and posted in Boston, historical, history, John Fitzgerald Kennedy, Kennedy 100, Massachusetts, New England, photographs, photography, photos, Uncategorized. You can follow any responses to this entry through the RSS 2.0 feed.
« Five Days Of Foliage Day #5 – Mine Falls Park (Nashua, MA)
Barker Character, Comic And Cartoon Museum (Cheshire, CT) »