Highlights: stallions performing tricks and ridden by their trainers 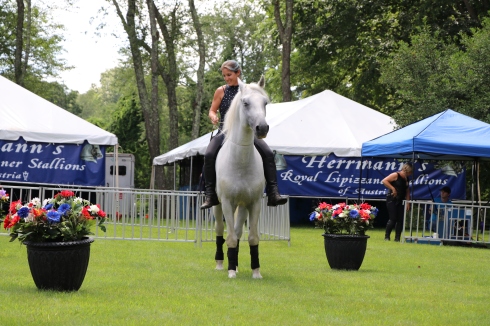 There was a lot of horsing around going on at the Roseland Cottage in Woodstock, Connecticut last month.

The Lipizzan Stallions galloped into the Roseland Cottage for a day of professional horse riding and horse tricks.

The Lipizzan Stallions traveled all the way from Myaka, Florida to entertain the one hundred or so visitors at Roseland Cottage.

Not all of the horses and animals kept at the Lipizzan Stallions shelter are Royal Lipizzan Stallions. For instance, Willie The Rescue Pony, seen here getting ready for the show, is one of the horses they have taken in.  He even performs at the show.  They also take in dogs, cats and any other animal that finds its way to their shelter.

The highlight of the show were the Royal Lipizzan Stallions. The horses performed tricks and trotted in formations. 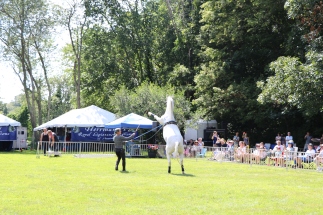 The horses are such beautiful animals.  The way they moved and the way the horse trainers and riders controlled their every movement was a joy to watch. 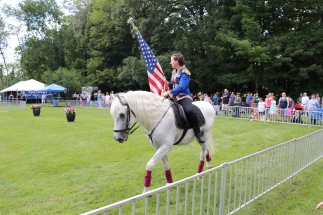 The Lipizzan breed is considered the rarest and most aristocratic breed of horses in the world.  They were first established by Archduke Charles at Lipizza which is now part of Yugoslavia.

Since only a few hundred Lipizzan Stallions have ever existed at any one time, their future lineage is somewhat in question.  But, they may have General Patton to credit for their continued bloodline.

During World War II General George Patton authorized a secret plan to save the Lipizzans.  The stallions, who would surely have been killed if the Russians arrived before their rescuers, were saved during this secret mission. Two of the people involved who played a key role in their rescue were Colonel Herrmann and his father, Colonel Ottomar Herrmann,  A movie by Disney titled, Miracle Of The White Stallions depicts their rescue.

The Lipizzan horse show was held at the Roseland Cottage.  We didn’t have time for a tour.  But, the grounds are very pretty. 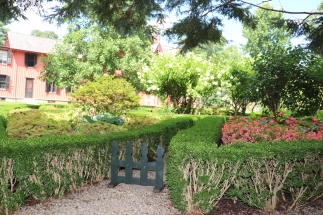 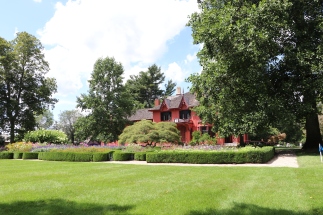 While dogs are not allowed at the show, I did see Yog,i, a 3 and a half year old Cavanese (part Cavalier King Charles Spaniel and part Havanes), and his dad watching from the sidewalk.  Yogi also barked out his approval from time to time. 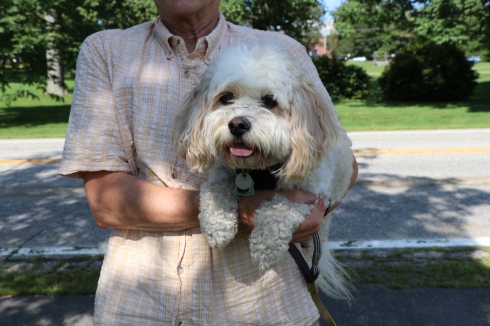 Below are some videos of the Royal Lipizzan Stallions event

Hi I'm Wayne. Welcome to my blog. I am a true New Englander through and through. I love everything about New England. I especially love discovering new places in New England and sharing my experiences with everyone. I tend to focus on the more unique and lesser known places and things in New England on my blog. Oh yeah, and I love dogs. I always try to include at least one dog in each of my blog posts. I discovered my love of photography a couple of years ago. I know, I got a late start. Now, I photograph anything that seems out of the ordinary, interesting, beautiful and/or unique. And I have noticed how every person, place or thing I photograph has a story behind it or him or her. I don't just photograph things or people or animals. I try to get their background, history or as much information as possible to give the subject more context and meaning. It's interesting how one simple photograph can evoke so much. I am currently using a Nikon D3200 "beginner's camera." Even though there are better cameras on the market, and I will upgrade some time, I love how it functions (usually) and it has served me well. The great thing about my blog is you don't have to be from New England, or even like New England to like my blog (although I've never met anyone who doesn't). All you have to like is to see and read about new or interesting places and things. Hopefully, you'll join me on my many adventures in New England! END_OF_DOCUMENT_TOKEN_TO_BE_REPLACED
This entry was posted on Wednesday, September 6th, 2017 at 4:43 am and tagged with connecticut, dog, flowers, horses, Lipizzan Stallions, New England, photographs, Photography, photos, Roseland Cottage, stallions and posted in connecticut, dog, horses, Lipizzan Stallions, New England, photographs, photography, photos, Roseland Cottage, stallions, Uncategorized. You can follow any responses to this entry through the RSS 2.0 feed.
« Wheels & Waffles (West Springfield, MA)
ICA-Part I (Boston, MA) »