Cost: Free (if you take a cruise out to see to the boats as I did fees would apply.  It costs $35 for adults and $30 for seniors.  Children and students also get reduced rates)

Parking: Due to the increase in visitors (they are expecting 2 million or more people) parking is limited.  The closest public transportation station is South Station on the Red line of the MBTA (fares are reduced for this period of time while people visit the event)

Highlights: tall ships from all over the world in Boston Harbor

Normally, when we see foreign boats in our harbor, it would be cause for alarm, especially given our past.  But, this group of ships from all over the world came in peace.

Millions have been predicted to descend upon Boston as we celebrate Sail Boston 2017.

To avoid the crowds and get a better view of the ships, I decided to book a boat on Mass Bay Lines to cruise by these majestic ships.  The boat was comfortable, wecould roam around the boat to get better views and we got so close to some of the freighters that we could wave and even shout to the crews on the boats.  In fact, some people on our boat shouted greetings in the language of the crew based on their point of origin.  I highly recommend taking a boat cruise if you plan on going to Sail Boston before the ships leave Thursday.

Our boat, The Freedom was docked at Rowes Wharf in the heart of the seaport district. 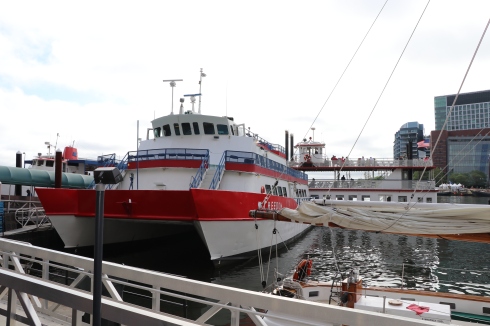 The views leaving the pier were beautiful. 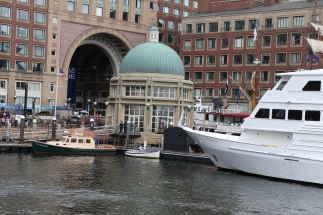 The first ship we noticed was the Europa. 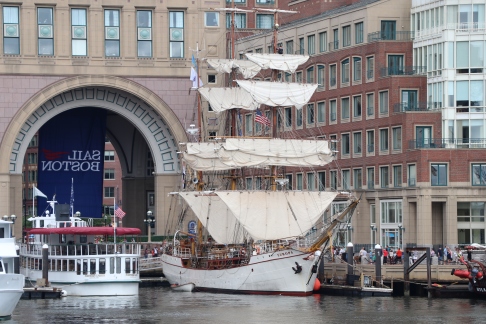 From Netherlands, the Europa has a steel hull and has a rig height of 33 meters.  It was built in 1911.

When the ships did not have their sails up, it was difficult to identify them.  Someone did announce the names of the ships as we passed by them.  But, it was hard to hear him at times and it was also hard to keep track of them all.  I think this is Thomas E. Lannon, a 93 foot schooner from Gloucester, MA.  It was built in 1997. 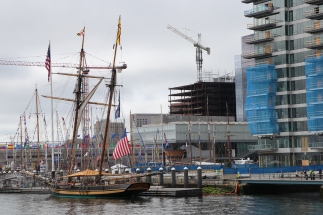 This is the Esmeralda, the pride of the Chilean Navy.  Check out the condor on the figurehead.  To show just how different the ships look with and without their sails up, look at the photo below from the Sail Boston website.  Big difference.  Oh yeah, and their photography might be a little bit more professional.  Just a little though.

The Oliver Hazard Perry from Newport, RI, is a baby compared to most of the other ships from the Tall Ships festival.  It was built in 2016.

Again, it looks much more impressive with its sails raised.

Alert is a 70 foot schooner from Bailey Island, Maine.  It has a wood hull and it was built in 1992.  I was able to get the ship in various stages of dress. 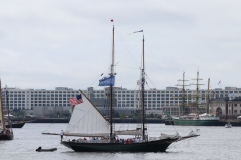 The Adirondack III is an 80 foot schooner from Boston, MA.  It was built in 1997 and it has a wood hull. 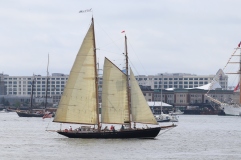 The Formidable is a brigantine from Boston, MA.  It is 72 feet long and was built in 2000. 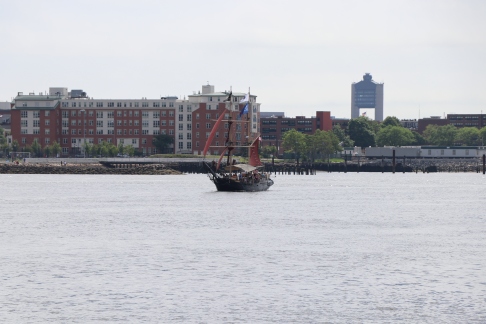 I was hoping to see more ships, especially with their full sails on.  But, I still think we saw a variety of pretty ships and boats.  What really caught my eyes was the buildings and structures against the ships and boats in the harbor. 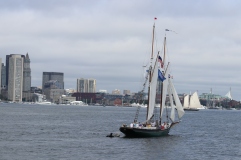 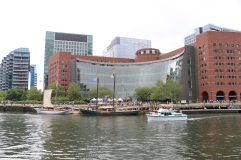 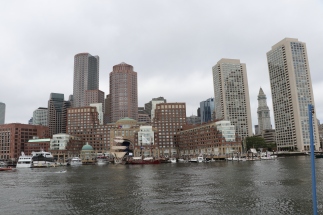 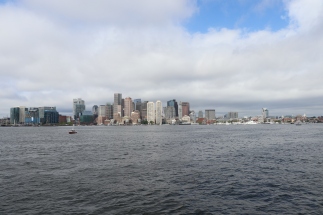 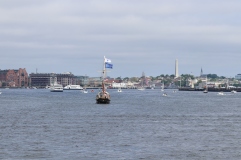 These kayakers may have had the best views.  But, I think being dry on the boat was better for taking photographs. 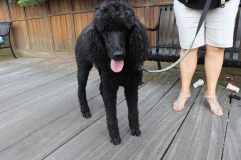 To see videos, photos and other posts that I do not include on my blog, please connect with me on Facebook!

Hi I'm Wayne. Welcome to my blog. I am a true New Englander through and through. I love everything about New England. I especially love discovering new places in New England and sharing my experiences with everyone. I tend to focus on the more unique and lesser known places and things in New England on my blog. Oh yeah, and I love dogs. I always try to include at least one dog in each of my blog posts. I discovered my love of photography a couple of years ago. I know, I got a late start. Now, I photograph anything that seems out of the ordinary, interesting, beautiful and/or unique. And I have noticed how every person, place or thing I photograph has a story behind it or him or her. I don't just photograph things or people or animals. I try to get their background, history or as much information as possible to give the subject more context and meaning. It's interesting how one simple photograph can evoke so much. I am currently using a Nikon D3200 "beginner's camera." Even though there are better cameras on the market, and I will upgrade some time, I love how it functions (usually) and it has served me well. The great thing about my blog is you don't have to be from New England, or even like New England to like my blog (although I've never met anyone who doesn't). All you have to like is to see and read about new or interesting places and things. Hopefully, you'll join me on my many adventures in New England! END_OF_DOCUMENT_TOKEN_TO_BE_REPLACED
This entry was posted on Wednesday, June 21st, 2017 at 4:24 am and tagged with boats, Boston, dogs, Massachusetts, New England, photographs, Photography, photos, Sail Boston, tall ships and posted in boats, Boston, Massachusetts, New England, photographs, photography, photos, Sail Boston, ships, tall ships, Uncategorized. You can follow any responses to this entry through the RSS 2.0 feed.
« SculptureNow (Lenox, MA)
17th Annual Hampton Beach Master Sand Sculpting Classic (Hampton Beach, NH) »