When most people think of the witch hysteria that gripped the New England colonies in 1692 and 1693, they are likely to think it began and took place exclusively in Salem.  However, although they are known as the Salem Witch Trials and Salem largely takes the infamy of the witch hunt, Salem does not hold that infamous title.

Salem Village, now known as Danvers, has the infamous distinction of being the beginning of the Salem witch hysteria.  It is here in Danvers, Massachusetts, where a somber memorial stands as a constant reminder to remember this past and to never let something like this happen again.

Erected in May, 1992, the monuments lists the 20 people who were executed during the witch trials.

Each slab lists a quote of innocence from each victim. 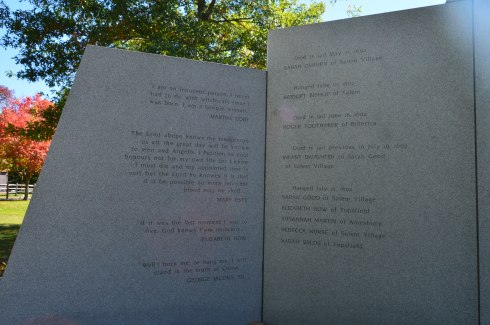 The rays spilling in from the top of the memorial was a nice touch. 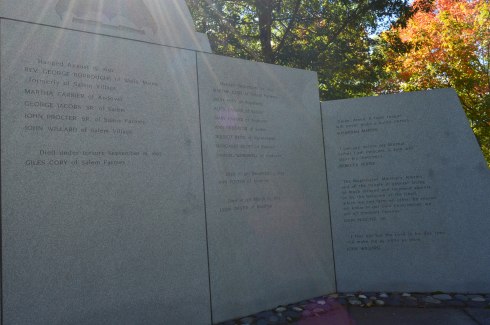 Some of the more poignant quotes listed on the wall are:

The memorial also has a sculpture of “The Book Of Life” on top of a table that has a tribute etched in the base. 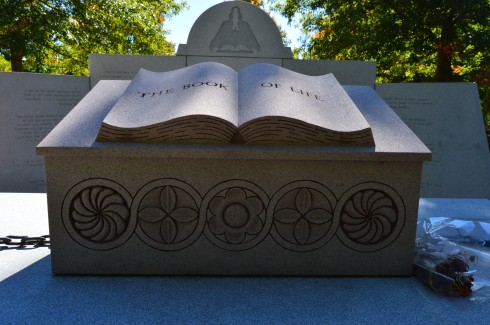 Attached to each side of the book are chains.  Stark reminders of the pain they endured.

Someone left a flower at the memorial, a common occurrence at this memorial, particularly during this time of the year. 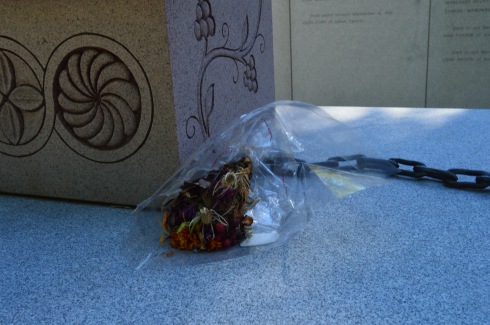 The memorial site has many pretty views to photograph from a variety of angles and the foliage added a nice touch.  The foliage gave a serene feeling in contrast to the moving memorial. 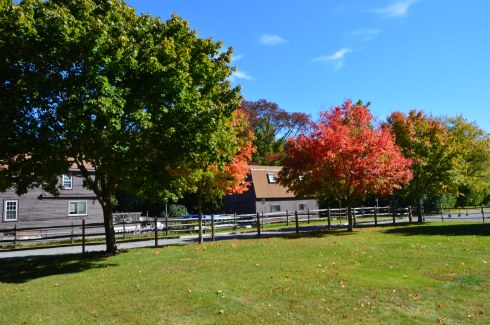 In front of the memorial, there is monument that lists the generous donors who made the memorial possible.  You may notice the red door on the house in the background.  This is not unusual for the area.  The houses in Danvers and the surrounding area were beautiful in their understated uniqueness and pretty yet rustic nature. 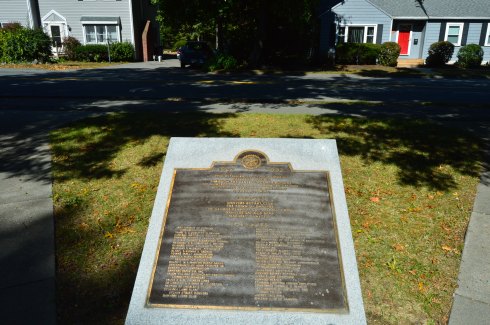 A sign, inconspicuously posted by the side of the road explains the origins and history of the site and surrounding area as well as the meaning behind the memorial.

Hi I'm Wayne. Welcome to my blog. I am a true New Englander through and through. I love everything about New England. I especially love discovering new places in New England and sharing my experiences with everyone. I tend to focus on the more unique and lesser known places and things in New England on my blog. Oh yeah, and I love dogs. I always try to include at least one dog in each of my blog posts. I discovered my love of photography a couple of years ago. I know, I got a late start. Now, I photograph anything that seems out of the ordinary, interesting, beautiful and/or unique. And I have noticed how every person, place or thing I photograph has a story behind it or him or her. I don't just photograph things or people or animals. I try to get their background, history or as much information as possible to give the subject more context and meaning. It's interesting how one simple photograph can evoke so much. I am currently using a Nikon D3200 "beginner's camera." Even though there are better cameras on the market, and I will upgrade some time, I love how it functions (usually) and it has served me well. The great thing about my blog is you don't have to be from New England, or even like New England to like my blog (although I've never met anyone who doesn't). All you have to like is to see and read about new or interesting places and things. Hopefully, you'll join me on my many adventures in New England! END_OF_DOCUMENT_TOKEN_TO_BE_REPLACED
This entry was posted on Sunday, October 11th, 2015 at 10:19 pm and tagged with Attraction, Danvers, Fall, foliage, Historical, history, Massachusetts, memorial, monument, New England, road trip, Site, Witch, Witch Trials and posted in attraction, Danvers, Fall, foliage, historical, history, massachusetts, memorial, monument, New England, photography, photos, site, witch, witches. You can follow any responses to this entry through the RSS 2.0 feed.
« Wollaston Beach (Quincy, MA)
Howl-O-Ween Costumed Pet Parade (Salem, MA) »